A majestic 300-year-old box tree stands like a guiding light at one end of the Lumi Collection development in Gungahlin. And in many senses, that’s exactly its role.

Two apartment blocks take their cues in size and scale from the registered tree, which was treated with kid gloves to ensure that its hydrology was unaffected by the construction process.

“When you find a tree like this one in Canberra, it’s our harbour views,” says developer George Kathelakis from KDN, as several parrots coast in to roost in its branches. “It comes with so many bonuses, including the wildlife, so why would you ever remove it? We started with the tree and worked backwards to preserve it.”

Lumi Collection is now substantially sold, another apartment development in the rapidly growing precinct near Yerrabi Pond. Sustainability and good design in the form of solar orientation and practical features were fundamental principles for KDN Group.

But in a town that prides itself on the image of a clean, green bush capital, how easy is it to actually deliver high environmental standards? And will developers make money doing so?

“The regulatory regime is imposed on you to begin with,” Kathelakis says. “That’s the baseline, but it shouldn’t be about reaching the bare minimum of what you can get away with.

“When you undertake to set new benchmarks, you take risks. For us, it’s a careful measure of how much additional cost you add and how that can fairly be reflected in the price of the units. We will largely be controlled by the market, and if the market is not ready or prepared to accept the price of those extra sustainability measures, you can’t achieve the results.”

There are government incentives for implementing higher environmental outcomes. Kathelakis says these could have been claimed at an EER rating of 7, while Lumi achieves 8.9, but they sit at the minimum rather than encouraging the very best design across the development as a whole. 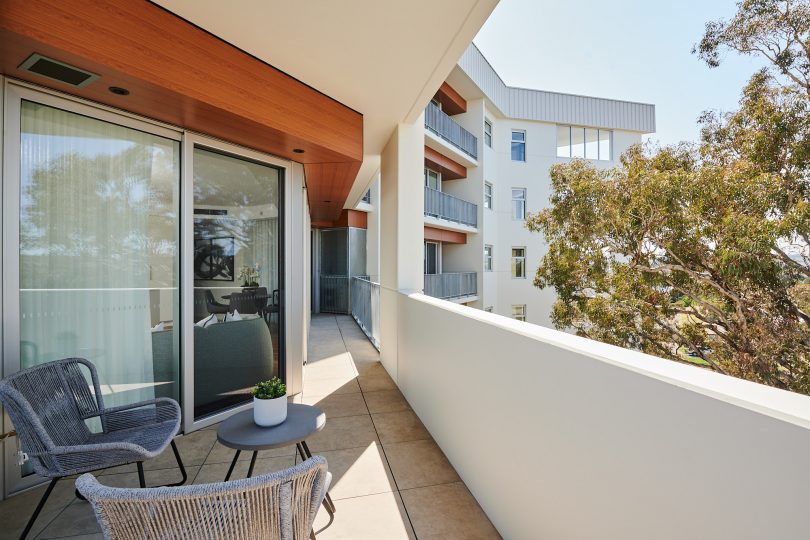 The system also means that sustainability measures can be averaged across a development rather than standardised for all units. High-performing units can elevate the rating for a development that also includes west-facing units without sun shading and still meet compliance standards.

“I don’t accept that myself,” Kathelakis says. “When you get a design like this, they shouldn’t be approved.

“Living in good design makes a difference. It’s not rocket science, and it doesn’t have to rely on high tech or sophisticated mechanical systems. Heat recovery units, for example, are not mandatory in the national construction code. They’re mentioned almost as a throwaway.

“If you’re building in Canberra, you should have thermally broken windows and a heat exchange as an absolute minimum. Those two things would solve a lot of sustainability and cost issues in new buildings.”

Lumi includes those features as a standard measure, along with insulation, recesses and orientation. The trade-off was a slightly less efficient building configuration – the yield on the site wasn’t as high as it could have been.

“Is that worth it? At times we weren’t sure,” Kathelakis admits, although he says close collaboration between the architects, designers, developer and builders shows what can be achieved. He thinks buyers also respond well when they’re shown how the whole precinct operates, from balconies to driveways, waste rooms and communal spaces as well as their own apartment.

“I think planning authority would agree there should be tougher consequences for poor design, but that’s very hard when the planning system is backwards,” Kathelakis says. “It’s constructed around trying to prevent the worst possible product, not promote the best product.”

Once a development is unit titled and constructed, there is no going back on bad design and poor sustainability measures.

“Someone has to endure the pain of that forever and a day. I think there’s a professional obligation to do the right thing in the first place and sometimes push back on the grounds of people being able to live a comfortable existence in the property for years to come.

“As a developer, you should be asking, would I be happy living here myself?”

It goes without saying that whatever the minimum standards are, most developers will do all they can to meet only those standards and not the slightest bit more. Assuming that they even meet the minimums, because what recourse is there after construction if they’re not up to scratch? Very little it seems.

The obvious solution is to impose suitably high standards to begin with. Give them something they need to meet, not work down to.

How about we make developers more accountable for their workmanship?

I’ve been in a number of new developments in the past few years to visit friends of new apartments and the workmanship is poor at best.

Stephen Harris - 55 minutes ago
Julian Hayes thenif it increases their costs but not their profits then they will stop doing what they are doing and do it di... View
Nicky Goose - 14 hours ago
Flexible work hours are a fabulous idea and frankly in a modern society and economy why we don’t push them more is beyond m... View
Michael Roy - 15 hours ago
Robert Knight that is one of the reasons it is abysmal, we need dedicated BRT lanes View
Food & Wine 3

Alex Petrow - 3 hours ago
Easy Purgy!! Double the speed limit. Because you will be on the road for half the time, the window for prangs is also halved!... View
Roderick Saunders - 4 hours ago
Kirsty Noad Canberra's had the log book assessment system for years. I think you only needed 20 hrs with an accredited drivin... View
Jason Thornthwaite - 4 hours ago
Good driving= no parking fines, no speeding fines, no accidents...pretty simple, but a positive amongst all these negative co... View
Community 2

Jade Barges - 4 hours ago
Such a pretty Church 💗 View
Janet Ilchef - 16 hours ago
I remember seeing Canon Buckle swinging beams into place. And the bells at St John’s in Reid were given by Lord de L’Isle... View
Motoring 32

Martyn Tweedie - 14 hours ago
So you're an exception. Nice to be able to afford all that. Sounds like the problem is affordable housing and rent, not the w... View
Patrick J Pentony - 15 hours ago
They will have a great view of those new massive powerlines View
Marko Lehikoinen - 15 hours ago
Martyn Tweedie we have 3 cars now, needing a 4th and in few years will need a 5th one. When kids can't afford to move out and... View
News 13