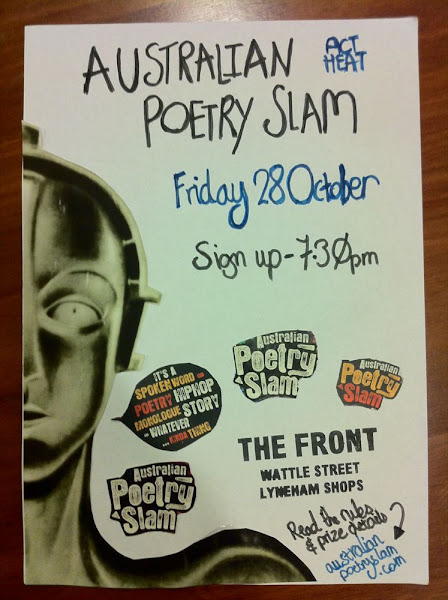 Facebook has the word on this year’s ACT heat of the Australian Poetry Slam:

It’s that time again… time to go head to head and mic to mic with Canberra’s best poetry slammers.

Sign ups start at 7.30pm sharp – there is an absolute maximum of 20 slots available so be sure to get there on time.

1. Maximum of 20 entrants per heat.
2. Enter at the venue on the night of the heat 30 minutes before the heat commences.
3. Contestants must reside in the state/territory in which they are competing. In some cases, if your nearest heat is interstate, an exception can be made. In such cases, if you compete interstate and are one of the two winners, you will progress to the final as one of that state/territory’s winners. e.g. If you live in Queanbeyan (such as a certain previous APS winner) and you win the ACT final, you will go to the national final carrying the magnificent title of “Glorious Grand Champion of the Canberras”.
4. Random draw for performance order.
5. ABSOLUTE two minute limit. Time starts at your first word or when the timekeeper feels the performance has begun (no additional time allowed for introductions). Points will be deducted from the final score for exceeding the time limit — one point for every 30 seconds over time. For example: At 2:01 minutes you will lose a point. At 2:31 minutes you will lose another point…
6. Five judges chosen by the MC at random from the audience.
7. Judges hold up score cards using a 1 – 10 scale, with 10 being the highest. Of the five scores for each poet, only the middle three scores are counted. The decision of the judges is final.
8. Poem must be the original work of the performer written within the last 12 months. No plagiarism folks. One or two recognisable pop culture references are okay.
9. Performers must be prepared to perform two different poems in the heat.
10. In the case of a tie a “slam off” will be used at the discretion of the slam organisers.
11. No musical accompaniment. No props. No costumes. (ie; clothing related to the content of your poem)
12. Two performers with the highest scores in each State Heats will proceed to the national final.
13. Employees of libraries or venues that are hosting heats may not compete.
14. Random draw for performance order.
15. Contestants must sign a copy of the rules prior to performing.

Last year’s heat was held at Smiths Alternative Bookshop and these were the performances: