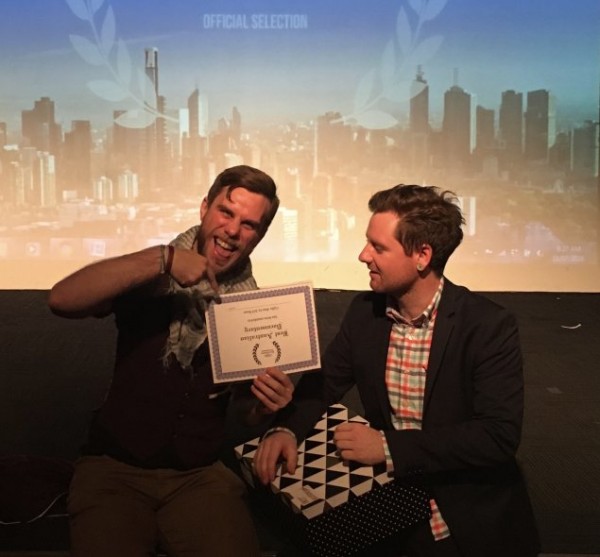 Two former Canberrans who made a documentary about the capital’s world champion barista are celebrating an award of their own today after their film, The Coffee Man, won Best Australian Documentary film at the Melbourne Documentary Film Festival last night.

The doco started out chronicling barista Sasa Sestic’s global hunt for the perfect coffee bean as part of a study of specialty coffee. Director Jeff Hann (above right) and producer Roland Fraval (above left) followed Sestic as he hunted beans in Ethiopia, Honduras and Columbia, then joined him as he became the first Canberran to win the Australian Barista Championships before heading to the World Championships in Seattle to share in the moment as the ONA Coffee barista (and owner) went on to collect the world title.

Hann and Fraval were in Melbourne for the awards, and told RiotACT they were “super grateful” to have taken out the best Australian documentary gong.

“It’s great to be able to go to a space and meet like-minded film makers to discuss and enjoy each others work,” Mr Hann said.

“Unfortunately, Sasa is hunting coffee in Honduras so couldn’t make the screening.”

He said the film would be screened at festivals throughout the year and would be back in Canberra very soon. It premiered here in May.

Paul Conn - 1 hour ago
Glenys is a great manager and one of the nicest senior colleagues I ever had the fairly brief pleasure to work with. View
Deborah Gale - 2 hours ago
A great boss and a nice lady. View
Karen Baldwin - 6 hours ago
Tania Parkes yep, me too View
Lifestyle 22

Megz Bites Inglis - 5 hours ago
I think they are both a head ache, pretty much going round in circles. I think Dean has the weaker argument here. View
Liam Grimshaw - 10 hours ago
I’m vegan View
Buddy Edwards - 11 hours ago
Dean Newman you have given me a migraine reading your words. View
Opinion 5

@The_RiotACT @The_RiotACT
Canberra's rock band Hands Like Houses is breaking free of their four walls for a national tour. We caught up with them on the road this week https://t.co/ojiymijMfp (1 hour ago)