Bijou a Cabaret of Secrets and Madness at the Street 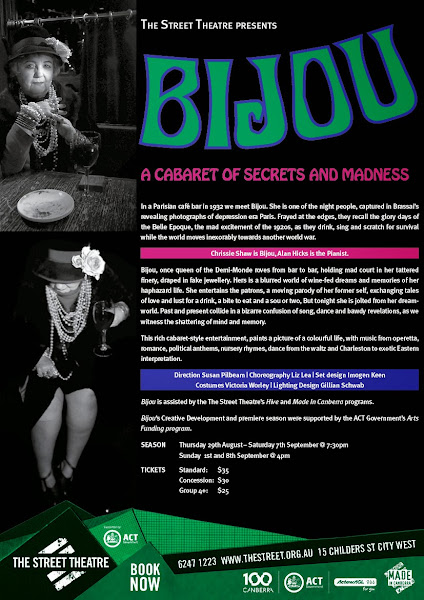 In a Parisian café bar in 1932 we meet Bijou. She is one of the night people, captured in Brassai’s revealing photographs of depression era Paris. Frayed at the edges, they recall the glory days of the Belle Epoque, the mad excitement of the 1920s, as they drink, sing and scratch for survival while the world moves inexorably towards another world war.

Bijou is assisted by the The Street Theatre’s Hive and Made In Canberra programs.

Vindalu - 5 hours ago
I doubt very much whether he is homeless... View
News 14

Sandra Wormald - 7 hours ago
Oh, so that is where the money from the tax payers went, which was meant for bush fire and flood relief ..... View
Business 17

Acton - 8 hours ago
A local paper that has a rabidly biased weekly column from a once amusing but now worn out journalist who intentionally and r... View
Tom Adam - 18 hours ago
*Riot-Act Rubs Hands *Canberra cries at the loss of the last printed journalism available as all other magazines and newslett... View
HiddenDragon - 20 hours ago
"If the printing presses are mothballed, the rationale for maintaining a large commercial building in a central location woul... View
News 3

George Watling - 19 hours ago
Will Andrew Barr's relentless war with nature never stop. 40,000 trees have been cut down and dozens of our green spaces have... View
News 44

Maria Greene - 21 hours ago
Frank Valzano yeah but how would Brendan or pollies benefit? View
Frank Valzano - 22 hours ago
Use the money to provide mental health support for current and former soldiers suffering from PTSD.😡 View
Lifestyle 2

@The_RiotACT @The_RiotACT
As gyms closed around the country during shut down, Canberrans downloaded apps and met in parks, to try to keep their regular fitness routines. But it wasn't just the exercise that everyone was missing https://t.co/603kPx0Cd7 (41 minutes ago)

@The_RiotACT @The_RiotACT
Googong has unveiled a new seven-metre high sculpture at the township's entrance. It's designed to welcome visitors to the booming area and celebrate the region's ecology and geology https://t.co/AWpPLqKNnk (1 hour ago)