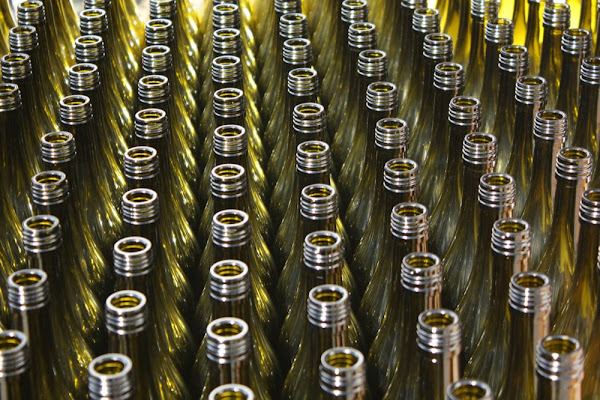 The mobile bottling unit fired up at the Mount Majura vineyard yesterday and they fired in a little photo essay for your edification.

They had this to say about this year’s work:

Local vineyard, Mount Majura Vineyard, are looking forward to the 2011/2012 vintage but will next week be focusing on bottling some of their 2011 vintages – the 2011 Tempranillo and their own blend called TSG which have both been in barrel for nine months, as well as the 2011 Chardonnay which has been in barrel for ten months

A large professional bottling unit will pull up to the back of the winery, the winemakers hook up the wine, feed in empty bottles and capsules at one end and at the other end arrives wine ready labelled and boxed.

“The mobile bottling unit we use is a very interesting process and is what the majority of local Canberra wineries are using as it’s quite expensive to run a permanent bottling line,” said Fergus McGhie of Mount Majura Vineyard.

“We usually do two bottling runs a year, one in summer and one in winter. Now is a great time for us to be bottling as it frees up the barrels ready for the new harvest which we are very much looking forward to,” he concluded.

Helm wines are doing the business next week.

Clever initiative by the winery. Fergus McGhie was a wine reviewer (for the CT and sundry others) before he took the Mt Majura gig, so he clearly knows how to make an interesting press release. Good stuff.

Juliana Vallejera - 19 minutes ago
I defrosted a chicken the other day. Sadly, upon defrosting it did not regain the ability to cluck or lay eggs. 😥 View
Lee Hughes - 1 hour ago
Jason Good Great investment! Imagine thawing out these two spuds in 2000 years expecting to find a Hemsworth. Ultimate time c... View
Jason Good - 2 hours ago
Say hello to Walt Disney for me when you re-animate 😂 View
Food & Wine 113

Rowan Hartcher - 14 hours ago
Alan Hopkins like wise View
Peter Quinn - 15 hours ago
So when can we celebrate colonisation????. Whatever day is nominated it will always be contested View
Alan Hopkins - 15 hours ago
its not that hard to change the day. just do it... View
Opinion 24

Bradley Heanes - 16 hours ago
Didn't the defence department already appologise for this? (Even though they were assisting the RFS at the time) Didn't they... View
franky22 - 19 hours ago
Why can't the ADF simply state that they made a mistake. View
News 21

Julie Macklin - 20 hours ago
Mark Katalinic Likewise why not use the roads for car racing? No, silly suggestion, as is yours. View
Julie Macklin - 22 hours ago
Tim McMahon Well, mine hasn't had a check since they closed the government registration check in Dickson years ago. Yes the c... View
Sport 3

Magpie Allan - 22 hours ago
Undoubtedly the two icons are among two of the greatest men you’ll could ever meet.... View
Breaking 5

Tramcar Trev - 22 hours ago
Simple do what other regions do, use local volunteers to staff the visitor centre. View
show more show less
*Results are based on activity within last 7 days

A Belconnen GP surgery was forced into lockdown yesterday (21 January) over concerns that a patient had recently been to...
Community 22

More than six months after a key city development fell victim to the COVID-19 pandemic, a crane has been erected...
Property 14

This week it's Australia Day, and there are some great events on around Lake Burley Griffin as part of the...
Breaking 0

Who would have thought that Canberra's Nick Kyrgios would morph from tennis brat and national embarrassment to statesman of the...
Community 22

Mount Majura Vineyard winter is a winning trifecta with brie, truffles and wine!

Nights at Penny: A curated dinner series of local produce at Penny University

@The_RiotACT @The_RiotACT
This week’s newsletter covers everything from a sumptuous Lebanese breakfast spread to algae in Canberra’s waterways to lively discussion around Australia Day https://t.co/hyR7zinwv6 (11 hours ago)

@The_RiotACT @The_RiotACT
Red & purple are the new black according to a group called the Red Hatters who provide encouragement + empowerment to women in Canberra https://t.co/nuHKJ26rGA (12 hours ago)