Brumbies lose, but again we see glimpses of the rebel angels

Foxsports tells the tale of the Brumbies 29-26 loss to the Sharks.

No loss is a good loss. But for a fan at the ground it was a great game to watch. down 10 points with 16 minutes to go the fans started wondering if we could win.

But the faithful knew it would just take a score in regular time and then a journey into the magic of rugby that is after time play.

As long as the team keeps the ball alive they can play. And having made the score, and showed a lot of nouse to drop goal the conversion the Brumbies played five glorious minutes of never say die rugby driving for the win.

They could have run up the white flag, booted the ball into touch, and taken the close loss bonus point. But this is, at last (essentially since the retirement of George Gregan and Steve Larkham) at team aspiring to greatness.

They’re young, and they won’t win all their games. But they will try.

Having said that Matt Tomua’s brainless short kicking game in the first half was appalling.

When Nick White and Christian Leiliifano were making up the halves they looked twice the team.

Also Ita Vaea was sensational off the bench. But we’ll concede the impact player role might be where he’s best. 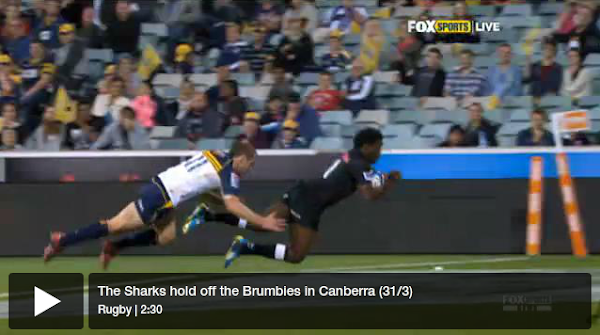 2 Responses to Brumbies lose, but again we see glimpses of the rebel angels
Filter
Showing only Website comments

One lesson the Brumbies could take away from the Sharks is: play for the whistle.

So many offside infringements from the Sharks, and I don’t think the whistle came out once for them.

Overall though, it was a great game to watch, especially seeing them not drop their heads when we fell behind on the scoreboard. That would have happened last year.

I agree that it was an excellent game. Along with Toomua’s poor kicking, it would be nice if Mogg could shave a couple of metres off his kicks. That’s five or six that he’s blasted out on-the-full over the past couple of weeks.

Jackie Fuller - 10 minutes ago
Brydie Kelly if that's your thing that's good 👍 View
Brydie Kelly - 5 hours ago
Jackie Fuller I've been to many a birthday party and had my 30th there. It was always a warm and welcoming environment. View
Alicia Conley - 7 hours ago
If they try put a maccas or KFC there I'll be protesting View
News 45

brianf - 52 minutes ago
I agree this has gone sideways but I still think the Woden extension is an expensive step backwards. All passengers from Molo... View
astro2 - 3 hours ago
Hi Chewy, a few things need clarifying here; I'll try to be brief as I think this topic has gone 'off track' from the origina... View
chewy14 - 4 hours ago
Astro, That's a gross misrepresentation. "Current R4 doesn’t have this." How exactly will those redirects benefit? The ligh... View
Opinion 57

Juz Hawke - 1 hour ago
OMG Kylie Green it's happening again 🙄 View
Juz Hawke - 2 hours ago
Jason O'brien okay thanks for the feedback on my opinion 👍🏻 I just liked the way the article was written. View
Oscar Mike - 2 hours ago
If you look at the data you would be not taking the experimental gene therapy. The conspiring occurred last decade, now they... View
News 2

Tom Worthington - 2 hours ago
ANU, University of Canberra, and other Australian unis, now offer a large number of undergraduate and postgraduate certificat... View
Tom Worthington - 3 hours ago
Vocational institutions also provide a way to get a qualification with a minimum of study. The staff at CIT helped me documen... View
News 26

@The_RiotACT @The_RiotACT
ACT Policing, NSW Police and the ADF will be undertaking joint border compliance activities over the school holidays. Yesterday, 4301 vehicles were stopped at major border crossings to the ACT https://t.co/yJEiPJLJfk (32 minutes ago)