At 28, with his first child just six weeks old, Wallabies playmaker and Brumbies co-captain Christian Lealiifano is quite literally in the prime of his life. How can it be, then, that the man named top form player for the Brumbies in Super Rugby only days ago has leukaemia?

The rugby community is reeling at the news of Mr Lealiifano’s diagnosis, made public this morning. The Brumbies issued a statement a short time ago saying that following a brief illness, investigations have indicated that Mr Lealiifano has been diagnosed with leukaemia and that he is currently in hospital for further management.

The Brumbies stalwart lost his father, Tavita Lealiifano, to liver cancer in 2006, a year before he joined the Brumbies.

Lealiifano had been tipped to lead the Brumbies next year after sharing the job with Stephen Moore this season. Earlier this year the popular flyhalf/inside centre had won his way back into the Wallabies team for the June series against England after a two year hiatus. He was by partner Luga Lam-Young’s side when their baby son Jeremih arrived in June, leaving a day later to join his national teammates in Brisbane for the Test outings. 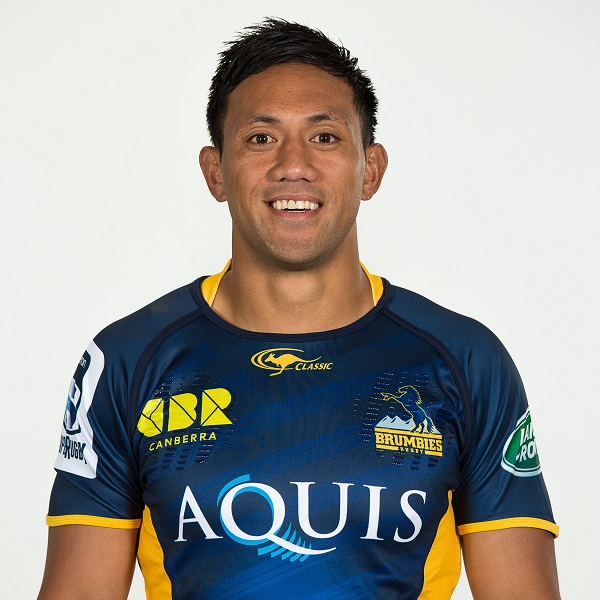 The flyhalf had planned to spend the Australian off-season in Japan with Suntory, having been omitted from the initial Wallabies squad for the Rugby Championships.

Now, the Brumbies and their supporters must rally behind their star and his young family as he faces his toughest battle yet.

Brumbies interim Chief Executive Phil Thomson said it was too early at this stage to comment much further.

“At the moment it’s just a matter of ensuring Christian receives the best care and support he can at this time,” Mr Thomson said.

“He is one of the most respected players within this group and this news has come as a huge shock to all of our players, coaches and staff.

“Everyone knows that Christian is an amazing young man, an important member of this team and of the Canberra community.

“Our thoughts and prayers are with Christian and his family at this time.

“We ask that the Lealiifano family’s privacy is respected and no more comments will be made at this time.”

The Brumbies’ statement said the club’s primary concern was for Mr Lealiifano’s health and any further updates on his progress would come via the club and with his personal approval.

David Rudland - 2 hours ago
Lillie Rudland we must try this. View
Liz McCarthy - 4 hours ago
Been there a few times , close to home . Do it ❤️ View
Sue Webeck - 6 hours ago
Caroline Fulton unmmm yes! View
News 14

A little under a year ago, the ACT Government announced that e-scooters can be legally driven on shared paths and...
Motoring 106

There were souped-up orange Toranas and sleek Commodores, a mint green Dodge Polara and a Valiant that was pulled from...

Why Christian Lealiifano is grateful for each day

@The_RiotACT @The_RiotACT
An array of local and all-star Australian acts will feature at picnic-style entertainment hubs to help Canberra celebrate on Australia Day https://t.co/My7xFBeqRF (6 hours ago)

@The_RiotACT @The_RiotACT
A COVID-19 vaccine program in Australia could roll out as early as next month, but can employees legally refuse to receive it? https://t.co/MCQkZR0IDR (9 hours ago)