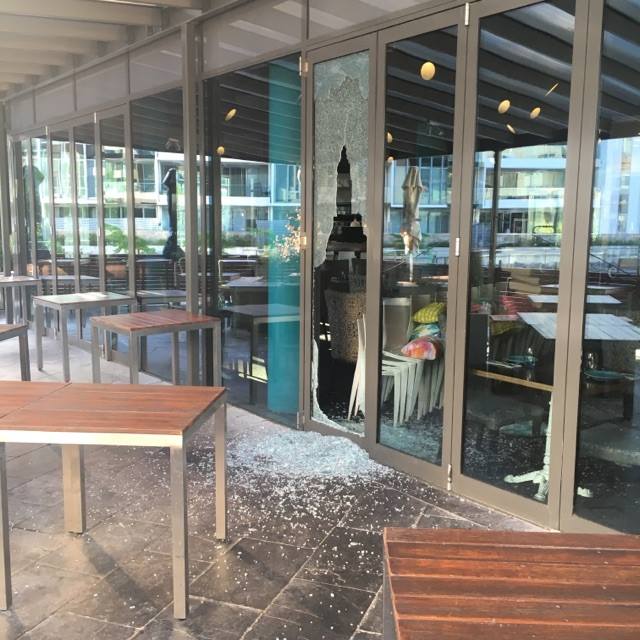 The owners of C Seafood and Oyster Bar are mopping up after the Kingston Foreshore restaurant was broken into in the early hours of this morning.

“Unfortunately, our Monday isn’t off to the best start,” they wrote on Facebook earlier today.

“Early this morning we recieved a call from our friends at ACT Policing to tell us we had been broken into.

“This is where we need your help!”

The post asked anyone who had seen or heard anything unusual at around 4.30am this morning near the Eastlake Parade restaurant to contact them via a personal Facebook message to the C Seafood and Oyster Bar page or to call ACT Policing or Crime Stoppers.

“Rest assured, Dan and Shann are busy cleaning up the shop, in the hope of delivering you seafood goodness as per normal tomorrow,” they wrote.

The RiotACT spoke this afternoon to co-owner Shann Howman, who confirmed that the thieves broke into the restaurant’s safe and took all its contents at around 4.30am this morning.

Mr Howman said there was video footage of the burglary but because the thief had been wearing gloves and a hoodie throughout, it would be difficult to identify them.

He and his business partner, Daniel Keogh, had been alerted to the break-in early this morning by friends and family. Police attempted to contact them at 4.30am.

Work to replace a damaged door was underway this afternoon.

The seafood and tapas restaurant has been open for three and a half years.

If you witnessed the break-in, heard or saw anything suspicious around the Kingston Foreshore early this morning, or can provide any information about the incident, please contact Crime Stoppers on 1800 333 000, or via the Crime Stoppers website. Information can be provided anonymously.

This is terrible news, and no doubt will hurt the restaurant during the busy summer period. I am sure the damage and sense of violation hurts more than the contents of the safe. I hope they are up and running again soon.

Most “el cheapo” safes that you buy in hardware stores or on the net can be cut open via the back panel with a cordless angle grinder.

And if that doesn’t work, then they may well just take the whole safe. Some second hand news told me this happened in Crace around xmas.

Most “el cheapo” safes that you buy in hardware stores or on the net can be cut open via the back panel with a cordless angle grinder.

Apparently C Avenue Wine Co, The Pedlar, Edgar’s Inn and some others were also done over last night/this morning.

A few cafes/restaurants in Gungahlin have been knocked over already this year as well. This sounds like a similar MO. Let’s hope the perpetrators are caught soon.

James Dof - 4 hours ago
I was catching a lot of public transport before covid even though I have a car, one reason was it's cheaper, other reason was... View
James Dof - 5 hours ago
Each to their own I guess, I take the bus because it's cheaper than driving. though I have caught the train and it's much mor... View
JC - 7 hours ago
The great dividing range is not an issue and is not one that needs to be tunnelled through. I’m sure you have driven the Hu... View
News 3

Spiral - 7 hours ago
"He was convicted of mishandling classified information that potentially revealed the identities of agents". I agree his puni... View
Acton - 8 hours ago
This is not the first time defence personnel have been caught mishandling classified material, but the harsh circumstances of... View
Spiral - 8 hours ago
"“J” has well-grounded fears that he might be targeted by foreign intelligence agencies" That certainly sounds like he ha... View
News 27

Trish Roberts - 9 hours ago
Yes. Does not want to hear the opinion of older people. Well, one day, if he’s lucky enough, he’ll get old, too!... View
News 8

nigefromfarrah - 10 hours ago
Constructing the city to lake project was a labour commitment at the 2016 election. They won, enough debate, get on with it.... View
Property 8

nigefromfarrah - 10 hours ago
Sorry but No part of this will be affordable !! View
Best of Canberra 139

rhona1212 - 11 hours ago
I would like to recommend Canberra Blocked Drains Services for not disappointing us. Two plumbers came before them but failed... View
Business 4

UPDATE - 1 June: Police have now arrested a man and a woman, and recovered a weapon, in relation to a...
Sport 9

Fluff your beanies, wax your skis and maybe get familiar with the term aprés-ski because Aspen might just be on...
Community 147

The longstanding saga of Braidwood’s historic highway entry lined with golden and Lombardy poplar trees is progressing to the next...
News 20

@The_RiotACT @The_RiotACT
The Canberra Short Film Festival is celebrating 25 years and forging ahead with cautious optimism, calling for entries for this year’s event https://t.co/NI0mXRpIxo (1 hour ago)

@The_RiotACT @The_RiotACT
Prescribed burns will occur over the next few weeks to reduce bushfire risk in the ACT. The ACT's fire management unit shared its insights with Region Media into fuel management & hazard reduction ahead of the next bushfire season https://t.co/3FlHtKHsF5 (2 hours ago)

@The_RiotACT @The_RiotACT
The Greens & the Shooters, Fishers and Farmers Party have both announced candidates for Eden-Monaro as the race heats up. And with just over a month until the by-election, how will COVID-19 affect what could well be a tight race? Genevieve Jacobs has more https://t.co/HBSmZSAw63 (3 hours ago)