Cafe permits starting to look a lot like leases 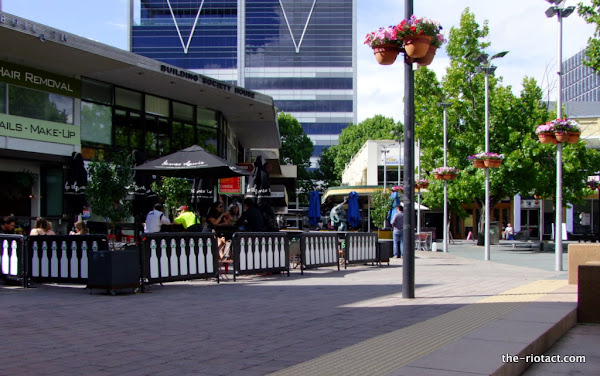 Chief Minister Gallagher has announced changes to the use of public land, particularly letting cafe owners sell the permits to put tables on the footpath.

“The new Bill proposes a range of reforms and will simplify the current permit system, reduce red tape for business and facilitate use of public spaces,” the Chief Minister said.

“Businesses have been asking for changes to legislation which governs the use of public places in Canberra. In particular, the business community has been seeking the ability to transfer existing permits with the sale of their business, for example, the sale of a cafe with an outdoor eating space.

“It also provides greater certainty for businesses who can now apply to have their permit for use of public unleased land extended to two years from the 12 month term which also reduces the paper work around having to renew their permits annually,” the Chief Minister said.

The reforms also authorise the use of public unleased land for activities or events, such as charity bins, construction skips, and will also provide for the holding of markets and for exclusive use of some areas of open space for a concert or the holding of a function such as a wedding.

While the bill will revamp the current permit and approval system facilitating the use of public unleased land it will ensure the amenity and natural value of public spaces is not diminished.

They should bung in a few paragraphs to cover Boot Camp operators while they’re at it, haha.

Shane Westmore - 8 minutes ago
parking outside Woolies is all 2-hour paid, it's guaranteed this'll be the same... Coles will love turning that area into a m... View
Hillbilly - 1 hour ago
Totally overdue. God, what a dump Dickson shops are. Filthy and wholly inadequate.... View
Jaffa Groube - 19 hours ago
'How to kill a suburban shopping centre' by Mike Gentleman. Worked really well in Manuka. View
Community 15

Bec O'Brien - 4 hours ago
It's been closed for a few weeks now. I travel to Dalmeny for work every week from Canberra. Thought it was odd. View
Food & Wine 112

Lillie Rudland - 10 hours ago
David Rudland just say when! View
Jody Kisbee - 14 hours ago
Sounds like a plan View
Jodie Roberts - 14 hours ago
Julia McFarlane what are you two up to this weekend? This looks lovely View
Opinion 34

Matt Henry - 14 hours ago
Allison Jay if she says that then u could only blame boring parenting. Canberra is a great place to bring up kids ans live. View
Allison Jay - 2 days ago
Kat Rothwell haha yes indeed View
Sport 5

Border_Libran - 18 hours ago
Hi A_Cog, I’ve just found your comment, if you still reside at Oaks Estate I would be interested in contacting you, I was p... View
Breaking 1

Capital Retro - 18 hours ago
How unlucky is this dude? I mean, it's hard to even spot a police car in Canberra let alone hit one. View
News 1

Harley Quinn - 19 hours ago
Canberra has NEVER been a peaceful city. I was kidnapped in 1993. It's nice that some people still have that illusion though. View
Business 18

Bob Jones - 1 day ago
Deb Wheare And Lynne Meredith... I've heard because of the more right someone who identifys as being an Aboriginal or Torres... View
Kev Martin - 1 day ago
I find If you stop breaking the law, you don't get locked up View
Community 12

Pari Gilmour - 2 days ago
I support a burnout pad. Zero interest myself but obviously these guys need a social space to do their thing. Happy to suppor... View
What's On 5

russianafroman - 2 days ago
Will probably laugh at the annual Twitter meltdown, if there’s a protest maybe I’ll go and see what happens, hopefully th... View
Capital Retro - 2 days ago
Unless there is a new law directing me to go somewhere and do something I will be staying home and counting my blessings. At... View
Food & Wine 9

Megan Buckley - 2 days ago
My 84y.o. Dad; and I are the pair of regulars mentioned at the end! We were Burn's regulars back when they were famous for th... View
Property 1

As national stories go, it sure beats the hell out of having the world's worst air quality, an epic natural...
Property 16

Indigenous people in the ACT are experiencing increasing incarceration rates and over-representation in the justice system, with a ministerial briefing...
Opinion 55

It's time for ACT Government to take another look at the e-scooter hire scheme as the brightly coloured devices litter...
Opinion 34

@The_RiotACT @The_RiotACT
Police are seeking the public's help to locate Alex Coppinger. He has not been seen or heard from since he went riding early yesterday https://t.co/iUwJIQFGb9 (1 hour ago)

@The_RiotACT @The_RiotACT
Stories about Summernats, snakes, Skywhale & a new venture from the team behind Bombolini doughnuts all featured among the top stories on the RiotACT this week. Catch up with our latest newsletter https://t.co/4JyEruj9tg (13 hours ago)