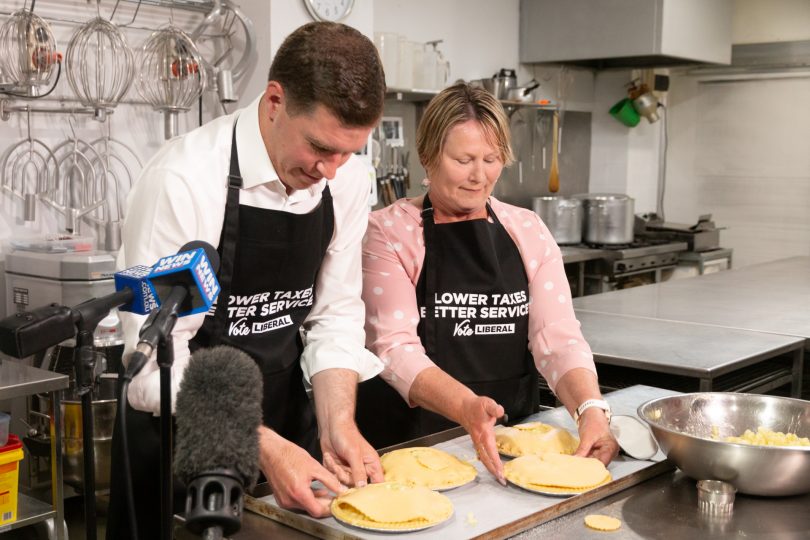 On The Campaign Trail today, the Liberals bake a pie, the major parties respond to the Federal Budget and the Greens unveil a new package for mental health week.

The Canberra Liberals headed to the bakery to demonstrate how they would grow the economic pie – with an apple pie – by enticing more people to come to the ACT from regional areas like Googong and Murrumbateman.

The pie was a little light on the filling, though, with leader Alistair Coe failing to put a number on how many people would need to move to Canberra and pay rates to cover the Liberals’ spending promises while delivering a smaller deficit than Labor.

“It is so important that we take action as soon as we possibly can. Every single person who goes over the border is a missed opportunity,” Mr Coe said.

“If we do [make Canberra more affordable] we will have a larger economy, we will be able to grow the pie.

“Obviously the ACT is in significant debt, even before COVID. However, what we do know is that if we have the growth in the region harnessed here in the ACT, we will grow the pie and have more revenue as a government and more economic opportunities so there will be lower debt.”

Mr Coe said the ACT was foregoing $50 million annually from the 2,000 homes that were built in Googong as opposed to Canberra and lost $400 million in land sales and stamp duty.

ACT responds to the Federal Budget on party lines

The Canberra Liberals have welcomed tax cuts from the Federal Budget, saying the Commonwealth Government has been doing most of the heavy lifting for Canberrans, but Chief Minister Andrew Barr and Greens leader Shane Rattenbury have both hit out at the budget for being a missed opportunity.

Mr Barr said the budget did not go far enough in regards to welfare payments – with JobSeeker to revert to the old Newstart rate of $40 a day next year – while Mr Rattenbury criticised the Federal Government for failing social housing.

“The budget benefits the millionaires not the millions,” Mr Rattenbury said.

“So much money for [infrastructure in the ACT] is just roads – the Liberals went for the traditional blokes in hardhats approach.”

Funding for other infrastructure projects, like a multipurpose convention centre, should have been looked at, he said.

In contrast to the Liberals, Mr Barr criticised the Federal Budget for leaving the heavy lifting to his government.

“What is clear is that the ACT Government will have to continue shouldering the burden on job creation in the Territory over the next two years,” he said.

“Tertiary education has been decimated by the COVID-19 pandemic, and locally we have seen the consequences that our universities are facing.

“The ACT’s historic social housing debt, which continues to attract an interest rate of 4.5 per cent, has not been waived for Canberrans. It is incomprehensible that the same debt can be waived for Tasmania and not for the ACT.”

The Feds didn’t get the memo

The Canberra Liberals have promised to rip up the controversial North Curtin Horse Paddock deal with the National Capital Authority, but it appears no one told their federal counterparts who set aside $600,000 for future diplomatic estates in the budget.

”I have had conversations with the federal Liberal Party and I am confident we can unpick this deal,” Giulia Jones said when she announced the policy, without going into any more detail.

The Canberra Liberals did not respond to questions from Region Media about what the budget allocation means for their promise or whether anyone has been in contact with their federal counterparts in light of the announcement.

In the midst of mental health week, the Greens have released details for a new $47 million package that includes funding for five additional supported accommodation houses and 10-bed refurbishments at Brian Hennessy Rehabilitation Centre if re-elected.

A $100,000 feasibility study will also be commissioned to examine how mental health carers can best access respite programs and time off during difficult periods.