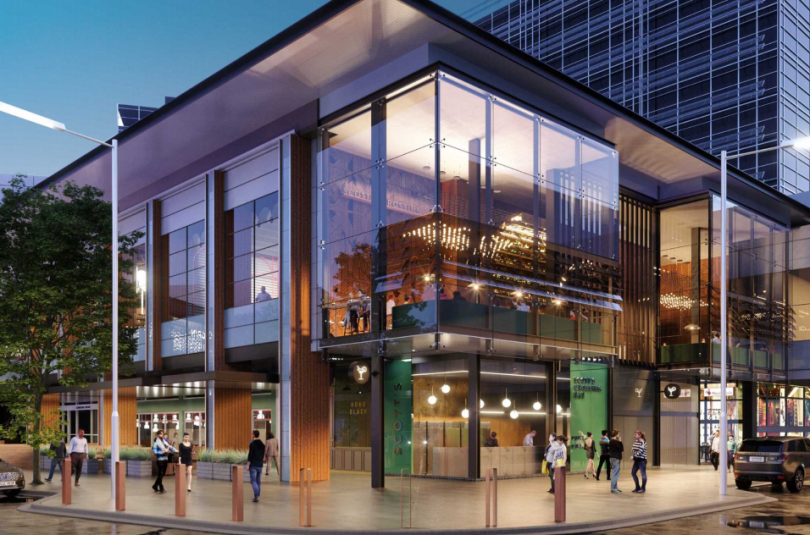 A new city nightspot is on the way with the Canberra Centre planning a bar/restaurant in its North Quarter that will transform the corner of Scott’s Crossing and Bunda Street.

The proposed upstairs night bar with overhead balconies and a downstairs kitchen, designed by Maher Architecture, are part of a number of upgrades designed to enhance the Canberra Centre Dining and Entertainment Precinct.

The development application from Queensland Investment Corporation (QIC) says the $735,000 project will activate a space that is underutilised, create a point of interest on a key corner and improve the amenity along Bunda Street and Scotts Crossing.

The existing escalators, awnings, beams and windows will be ripped out and two new ground and first-floor tenancies created, with a new Level 1 slab and enclosed balconies.

It will increase the gross floor area by 150 square metres but no changes to the Crown lease will be required to accommodate the new areas.

An existing tree nearby will be retained. 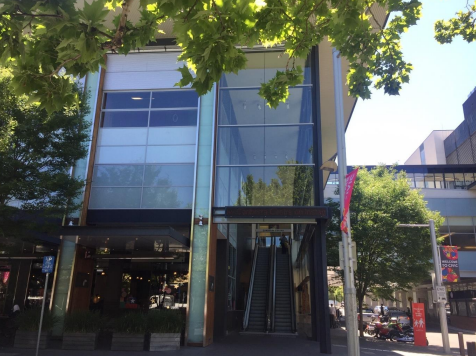 The DA, prepared by Maher Architecture for QIC, says the proposed works are an integral part of the Canberra Centre’s retail repositioning and will improve the range and quality of the food and beverages available in the North Quarter.

“Once completed the proposed works will have a positive impact on pedestrian movement and amenity as access to the centre from the street will be improved and the general aesthetic of Bunda Street and Scotts Crossing will be enhanced,” it says.

QIC last month lodged plans for a new restaurant and outdoor dining space along the southern end of Bunda Street.

In December, the entertainment and ten-pin bowling attraction Kingpin, opened in the former Level 1 food court in the North Quarter.

Looks like they're gonna rip out the escalators to put a bar in, great.

So getting rid of the most useful escalator in the whole building, and what about Coco Black.

Just another land grab for more food. I prefer the escalators

Just what we need😝

Tania Turner - 2 minutes ago
Mel Willis yep is always September and October that are the months that can't make up their minds on what weather it wants to... View
Gayle Marie Stone - 6 minutes ago
Lauren Ellen you are joking! You need to come back to Queensland.... View
Sanyukta Chatterjee - 8 minutes ago
Yash Mehrotra the last of it 😞 View
Community 61

Noni Evans - 10 minutes ago
Casey Jane , found any yet? View
Lorraine Clements - 1 hour ago
Got some outside our place that I have put little jewels all over them. View
Opinion 140

Capital Retro - 17 minutes ago
with an e-scooter as the safety vehicle View
Lucas Danes - 51 minutes ago
Yes please and thank you very much. View
Bruce Lamb - 1 hour ago
Will never happen if racing has to be finished before 5 pm. The almighty TV gods that have complete control of Supercars will... View
Community 6

Annie Tully - 24 minutes ago
Nice article 😊 View
Brian Lodge - 1 hour ago
Hi Susan how wonderful Congratulations to Mark and Coral , they were great neighbours (very caring) back at Tulla over the ye... View
Gail Tully - 2 hours ago
Thank you Amy View
News 19

Frank Waters - 30 minutes ago
I lived there in 88. It was used to house public servants in 70s. I thought students needed more accommodation? View
Mark Heinrich - 52 minutes ago
Warwick Bradly - I stayed at Macquarie Hostel when I first came to Canberra in 1984. ‘Live-in’ officers were normally qua... View
Peter Graves - 2 hours ago
Some very interesting memories here. Anyone's go back as far as Reid House, Barton House (which wasn't a Government one), Hot... View
News 5

chewy14 - 52 minutes ago
The reason why those plans are pushing for Vaccination of parents and teachers is not to protect the children, it's to protec... View
Dilkera - 1 hour ago
In commenting about students returning to school, it is important to remember there will be a cohort of 0 to 11 year old chil... View
Opinion 56

chewy14 - 1 hour ago
Won't be fooled again, That's a joke right? This isn't about China launching a military attack on us in the short term, it's... View
Futureproof - 2 hours ago
We don’t owe the French anything. This is a business transaction and all they produced was paper and highly paid middle men... View
Lifestyle 5

@The_RiotACT @The_RiotACT
A #construction worker at a site that was listed as an exposure location says he didn't feel safe at work due to a lack of #COVID-19 safety protocols https://t.co/Gq8rRKGtox (28 minutes ago)