Canberra’s residential property market has posted a 6 per cent rise in home values for the financial year despite the COVID-19 economic downturn, according to the latest data from CoreLogic.

Home values were flat in June, but holding firm in the face of nightmare scenarios for the housing market in general with a marginal 0.1 per cent rise for a median figure of $639,965. Stand-alone houses also hardly moved, increasing just 0.1 per cent ($716,150), reflecting the lack of stock in the market, but units were up 0.3 per cent ($444,181).

For the quarter, though, houses led the way with a 0.9 per cent rise, while units fell slightly, down -0.1 per cent.

Houses also dominated the chart over the past 12 months, posting a 7.4 per cent rise, while units only rose 2.4 per cent.

The year-to-date results show houses up 2.8 per cent and units 0.6 per cent.

The national capital maintained its position behind Sydney and Melbourne, which both posted double-digit rises for the financial year but where values have fallen for two months in a row.

Five of the largest capital cities recorded a decline in home values over the month, ranging from a drop of -1.1 per cent in Melbourne and Perth to -0.2 per cent in Adelaide, contributing to an overall national slip of -0.7 per cent.

CoreLogic says that despite values being down in June, estimates of market activity showed a further improvement from the April low. After a revised 21.5 per cent surge in sales activity through May, CoreLogic estimates home sales in June were up a further 29.5 per cent. 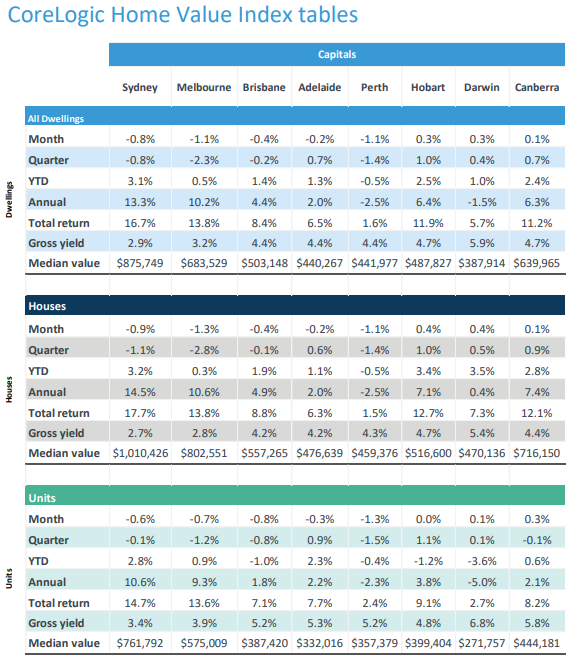 The data shows Canberra remains a resilient market that is stirring again after the coronavirus-enforced dormancy.

On-site auctions have resumed in Canberra and although numbers remain low, most of what is going under the hammer is selling.

The last three weeks showed clearance rates of 89 per cent, 80 per cent and 70 per cent respectively, with the number of properties ranging from 25 to 20.

Canberra’s end of financial year result means the national capital is on track to meet last year’s tip from SQM Research of a 4 to 8 per cent rise in 2020.

Its Housing Boom and Bust Report for 2020 said Canberra was the safest bet in the country, and that if the economy heads south only Canberra looks likely to offer consistent improvement and stay in healthy positive territory.

CoreLogic head of research Tim Lawless said the impact of the COVID-19-induced economic slowdown on home values was mild to date, due to low listings and significant government stimulus.

“Additionally, low-interest rates and forbearance policies from lenders have helped to keep urgent sales off the market, providing further insulation to housing values,” he said.

“The 12-month change in home values remains in positive double-digit territory across Sydney (13.3%) and Melbourne (10.2%). The only capitals where values show declines on an annual basis are Perth and Darwin, but even across these cities, home values were early into a recovery phase pre-COVID.”

But Mr Lawless said the longer-term outlook remained highly uncertain due to the eventual tapering off of lenient repayment policies and government stimulus.

”The longer-term outlook for the housing market is largely dependent on how well the economy is tracking when these support measures are removed,” Mr Lawless said.

Kaitlyn nothing will stop it lol

Wonder what that means for rental longer term? Probably go up after covid to match increase in housing values

It’s crazy how ridiculous the prices of housing are in the ACT, especially considering the slap dash rubbish quality of them.

David Ward true. All we have in the new areas are cheaply build identical square boxes everywhere!

Shiva Sapkota A lot of the older areas also have many poor quality houses. Cheap materials 🙁

“The last three weeks showed clearance rates of 89 per cent, 80 per cent and 70 per cent respectively, with the number of properties ranging from 25 to 20.”

If these are the same figures that are published in the Sunday Canberra Times they are indeed very dodgy. The data rarely equates with the outcomes.