Buy your first home sooner.
Get a free buyer’s consultation

Canberra is the best performing capital city market in the country.

Canberra’s home values have finally yielded to the pressures on the national housing market, with prices dipping for the first time in a long time last month, by 0.2 per cent.

But according to Core Logic, the Canberra market is still the best performing capital city in the nation, with the median dwelling price now $587,583, still up marginally over the three months up to 31 May at 0.2 per cent and 2.4 per cent over the 12 months.

Houses, which have been particularly resilient, fell more than units, down 0.3 per cent on last month but are still up 0.3 per cent over the quarter and 0.5 per cent so far this year, while over the 12 months values rose 3.4 per cent. The median price is $658,407.

But the national capital has been a boon for owner-occupiers and investors over the past five years, with Canberra’s overall dwelling values rising 23.5 per cent.

Ironically, the softness in the resilient Canberra market comes as prices in the big Sydney and Melbourne markets have started to arrest their falls, if not bouncing back.

Core Logic says that although dwelling values are still trending lower across Australia, the pace of declines eased further in May, continuing a trend that has been evident since the beginning of 2019.

Nationally, dwelling values were down 0.4 per cent in May, which was the smallest month-on-month decline since May 2018. 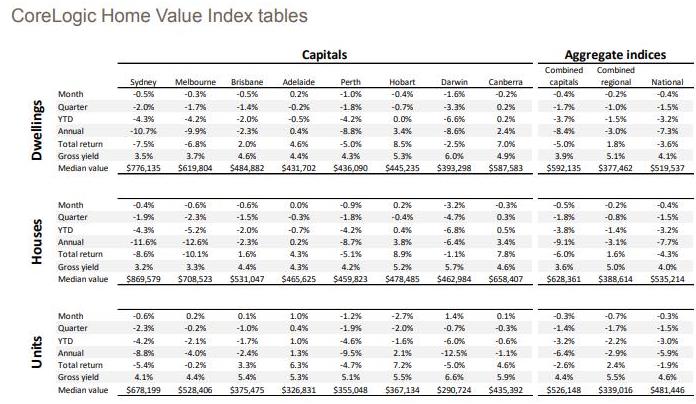 “In other cities, where housing market conditions have generally been more resilient to a downturn, the trend is opposite.”

Mr Lawless says the outlook is more positive after the election result removed uncertainty about taxation policies and the likelihood of lower interest rates, along with an easing of loan serviceability tests.

But he says lenders are still making it tougher for borrowers in the wake of the banking royal commission and are keen to reduce their exposure.

“Although interest rates and serviceability tests are set to reduce, lenders are continuing to scrutinise incomes and expenses much more intensely,” he says.

Comprehensive credit reporting is providing lenders with greater visibility around borrower finances and overall debt levels, and progressively lenders are reducing their exposure to borrowers with high debt levels relative to their income.”

I wouldn’t count on that as there are a lot of other factors in play.

Election results prove Canberrans more than anyone else believed Shorten and his property killing repeat of 1980s negative gearing agenda were imminent - prices will recover now consumers and investors have stability.

How do you figure that Canberran's more than anyone else believed that? https://www.abc.net.au/news/elections/federal/2019/results?filter=all&sort=az&state=act

What’s the chances of our annual land rates decreasing to match the drop? Buckley’s!!!

Barry Matson - 2 hours ago
of what? View
Michael Guina - 3 hours ago
It has to start somewhere and those two buildings are living example . View
Barry Matson - 4 hours ago
Kathleen Lee Canberra has no history. View
Opinion 80