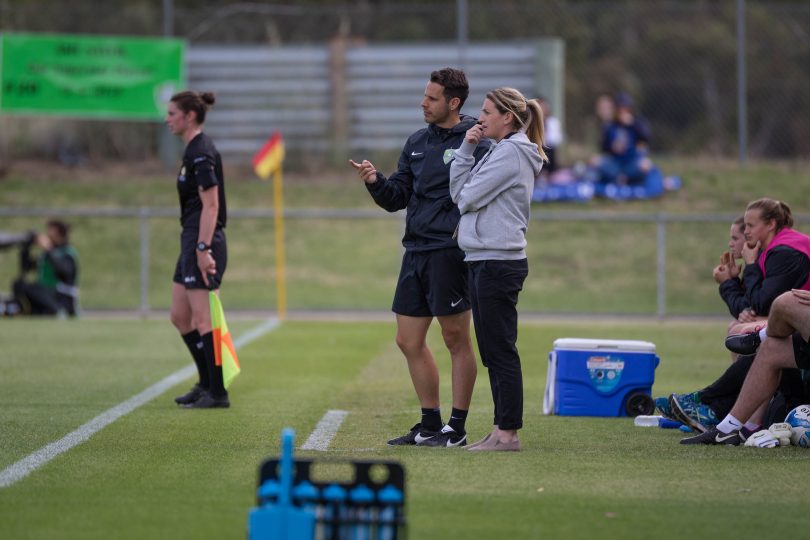 Canberra United assistant coach Alex Epakis is now the youngest A-License accredited coach in Australia after the recent successful completion of his assessments.

The 26-year old completed the final part of his license at the end of 2017, capping a quick rise through the coaching system after beginning his C-license in late 2013.

Canberra assistant coach Alex Epakis came to the capital with head coach Heather Garriock from Sydney University and he credited her for his quick rise through the coaching ranks.

“I want to continue the process of learning from people like Heather as an assistant until I feel like I’m in a position where I can offer value at a higher level.”

“I’ve met a lot of good people along the way who have helped me, particularly Kelly Cross at Sydney FC who gave me a great role within the Academy.”

As a 19-year-old, Epakis realised that his playing career had peaked and decided to take up coaching in a bid to stay involved within the sport’s professional environment.

He started his coaching license while he was still playing but realised that if he wanted to be involved professionally it wasn’t going to be as a player.

“I made the decision to start the coaching process with the C-License, and I guess I’ve just kicked on from there.”

“It’s been a really interesting rise. I never expected to be coaching at the level I am now or for it to be such a big part of my life when I started. It was always just something I wanted to do and use as an opportunity to springboard into other things.”

Epakis said that he would like to eventually coach at the highest level.

“For me, it’s not so much important whether it’s as an assistant or head coach, but as long as it’s being involved in high-performance environments working with good people.”

When Season 10 of the Westfield W-League concludes for Canberra United, Epakis will move back to Sydney for the winter months as he prepares to take on the head coaching role for the Sydney University women’s side, where he was an assistant to Garriock in 2017.

“When I get back to Sydney Uni it will be all system’s go, and I’m really excited to take over at what I believe is the best NPL side in the country for women.”

“For that project my goals are about doing as well as I can while I am there, meaning titles and success.”

Naimad Doowneerg - 2 hours ago
Bernard Miller not sure what you mean by "shear (sic) volume of adverse events and deaths". According to the TGA There have b... View
Garvin Francis - 3 hours ago
Nada Krstin So here’s totally what wrong with this whole anti vaxx, anti mask, anti lockdown argument. Its not about believ... View
Deborah Gale - 9 hours ago
Nada Krstin The vaccine gives protection and greatly reduce the likelihood of serious disease which is great. But children wh... View
Lifestyle 16

phydeaux - 4 hours ago
Rather my point, JS9. “…without qualification”. With significantly different individual circumstances, to give an answe... View
Kathy Blunden - 5 hours ago
I was also totally shocked with my electricity bill. It is the highest bill I have ever received and I have solar panels!!!... View
JS9 - 5 hours ago
It is a weighted average across a range of plans - so it means some will go up more, some go up less. Over the basket of plan... View
News 12