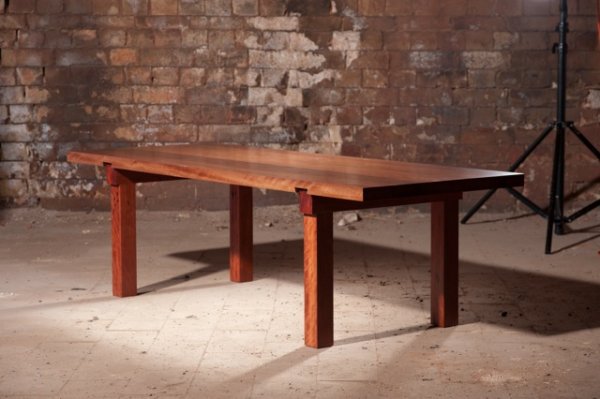 Mentioned in the same sentence as sawmills, pulp mills or logging, timber is a lightning rod for controversy. Environmental concerns are inseparable from the way timber is harvested and used, for all the right reasons.

Woodworking designers and craftspeople, by contrast, who have no less dependent a relationship with timber, tend to be regarded generously.

Part of the reason for this could be that few people work harder to incorporate and respond to environmental concerns in their work.

Fostering such concerned appreciation for woodworking’s delicate place in consumer society is something Canberra does especially well. In the last three decades, institutions and individuals alike have contributed to a small, thriving woodworking community in the nation’s capital.

DESIGN Canberra, the inaugural craft and design festival taking place 19-23 November, 2014, is drawing on and exposing this community.

Ashley Eriksmoen, head of the Australian National University School of Art Furniture Workshop, hails the workshop’s role in facilitating a robust, diverse set of practitioners, and not just in Canberra.

“The ANU Wood Workshop (now the Furniture Workshop) was established by a prestigious designer/craftsman, George Ingham, who was recruited from the UK to found the workshop in 1982,” says Eriksmoen.

“Today, we are one of only two places in Australia where students can earn a degree with a major in Furniture as designer/makers, and our alumni have been very successful in putting their talents to work here in Canberra, throughout Australia, and across the world.

“It is especially important to the workshop staff that we foster students in developing relevant and viable approaches to practice as they emerge into the contemporary, global scene.

“We include digital technologies, focus on natural resources and sustainable practice, an understanding of design history, in addition to [providing a] strong foundation in traditional skills in craft and design aesthetics.”

Elliot Bastianon, founder of the Six Wiluna studio/workshop in Fyshwick, student of the ANU Furniture Workshop and member of design collective MADE3, is quick to recognise the workshop’s importance.

“The biggest influence [in my work] has been attending the School of Art, and the people I met in that cauldron of creativity,” says Bastianon.

Bastianon founded Six Wiluna in an attempt to give Canberra makers somewhere to develop their practice without having to leave for greener pastures, and will be presenting the workshop as an open studio during DESIGN Canberra.

“Six Wiluna is just one small piece in a larger jigsaw puzzle that demonstrates Canberra is not just a place of public servants and grey government buildings, but a place to stimulate one’s imagination.

“It is still early days, but the studio is definitely starting to develop its own unique flavour, and a sense of community is developing, which is important because for too long Canberra has been stripped of its homegrown talent by the temptation of other cities.”

The lessons of the ANU Furniture Workshop, and of aesthetics and environmentalism generally, resonate in Bastianon’s own work, however humble his craft’s beginnings.

“Lego and I were best buddies when I was a pup,” says Bastianon, before taking on greater concerns. “Some things are a given: an environmental conscience; how a piece looks and makes you feel.

“I’m fond of restricting a piece or body of work to a material or technique. I like to think that when you limit yourself like this, creativity often explodes out in strange and unusual ways.”

Thor Diesendorf, founder of timber recycling business Thor’s Hammer, is one designer and maker who has demonstrated the potential of woodworking in Canberra, drawing on a relationship with the ANU whilst also establishing an independently successful business.

Such mutually beneficial collaboration is not limited to students or graduates, either. Local design and construction firms call on and work with Thor’s Hammer to create new works across Canberra.

“The Cyclery is a really cool example,” says Diesendorf. “I took all the stumps out of a demolition, which you normally wouldn’t take because they’re just short lengths, but they were interesting because there were so many of them and they were all the same length. And then Aaron Copland from Capezio & Co. designed this shop fit out around them and it came up really well.”

Evan Dunstone, founder of Dunstone Design, has been similarly integral to Canberra’s woodworking scene, and is bold in his praise of it.

“Canberra’s got some of the most interesting woodworkers in Australia,” says Dunstone. “Canberra’s an excellent place to sell fine furniture because it’s a highly educated community.”

Dunstone, who made a living as a pilot until his mid-twenties, turned to woodworking in the Canberra region after a return visit.

“Like a lot of people, I’d left Canberra and gone bush for a few years,” he says, before recounting a pivotal visit to the Bungendore Wood Works Gallery. “I didn’t realise what fine furniture was, or fine woodwork, and as soon as I saw it I went, ‘That’s the thing.’

“Up until then I’d enjoyed my time as a pilot, but I could also see I’d be fat and forty, flying from Brisbane to Melbourne every day, or worse still, flying to London and back. And by definition, the perfect flight is one nobody notices.

“I thought, ‘That’s not where I want to be in twenty years time.’ I soon realised with woodworking and craftsmanship, there’s no use by limit, you don’t retire from it. It’s a holistic and lifetime activity.

“It’s theatre, not cinema. One of the reasons we’re moving our showroom [in Fyshwick] back into our workshop [in Queanbeyan] is about the theatre of craft, so that people can look at a result design but then go out into a raw workshop and select the piece of timber they want their table made from.

“The woodworking in Canberra is all about reconnecting with people who make things.”

The Furniture Workshop, Six Wiluna, Thor’s Hammer and Dunstone Design are only a small part of the ongoing surge in Canberran woodworking practice. Incorporating MADE3, Stylecraft, and Humble House Gallery, the future of woodworking in Canberra is not only secure, but also nationally significant.

To find out where all these organisations are participating in DESIGN Canberra, visit designcanberrafestival.com.au.

Lynn Jamieson - 15 minutes ago
The ‘ consultation’ post drop was the size of a small postcard The printing and detail was unreadable We don’t know how... View
Lynn Jamieson - 17 minutes ago
We need a shadow diagram We live in an apartment that shares a fence with this proposal We could be completely overshadowed A... View
Food & Wine 10

Bec Kelly - 12 hours ago
I think the issue is that the Canberra Times wrote the article - they are after a head line and people to pay for their subsc... View
Business 9

UPDATE - 1 June: Police have now arrested a man and a woman, and recovered a weapon, in relation to a...
Motoring 9

One of the ACT's most iconic getaways, the Corin Forest Alpine Resort, will open its snowplay sessions this weekend only...
Property 35

A Geocon proposal for an eight-storey mixed-use development in Kingston is out of step with the character of the area...

This pandemic has seen individuals and organisations reorganise day-to-day activities in a different way. Some have risen to the challenge...
News 44

The ACT Government has called on Opposition police and emergency services spokesperson Guilia Jones to quit the portfolio after it...
Property 35