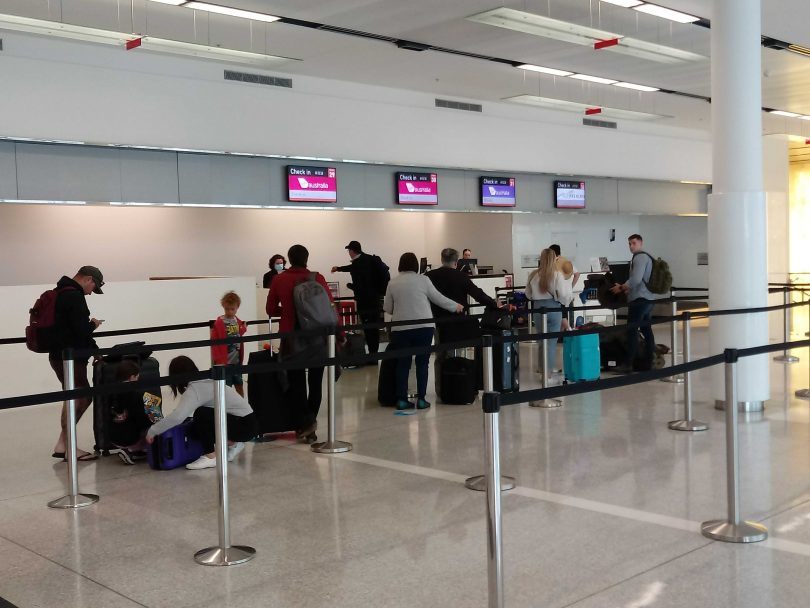 Canberrans have rushed to soak up the sun in Queensland as the Territory crawls its way into Spring, booking out the first flights to the sunshine state after it reopened its border to the ACT at 1:00 am today (25 September).

Flights at Canberra Airport have increased from 45 last week to more than 65 next week to keep up with the demand after both Queensland and South Australia reopened borders to the ACT.

There are now 15 direct services to Queensland per week – 11 to Brisbane and four to the Gold Coast.

From Monday there will be a flight to Brisbane every day, and flights to the Gold Coast five days a week.

READ ALSO: Canberra Airport soon back to a seven-day operation as borders reopen

The news – announced last week – that borders were reopening was well received by Canberrans who had been cut off from interstate family and friends for months.

“As soon as I heard the announcement about the Queensland border reopening, I jumped straight onto the web and had my flights booked within the hour,” James told Region Media.

“I am not from Queensland originally but have a bunch of family and friends up there who I have not had the opportunity to see since the pandemic started.

“One of the hardest parts about the pandemic has been the separation from those I care about, so I am really looking forward to spending some quality time with my loved ones again.”

James decided to fly out on the first day he could because of the capricious nature of restrictions and border closures meant the situation could change at any moment.

“I didn’t want to risk the situation changing and the border closing again – so I booked a ticket for day one,” he said.

“I know the pandemic has been an evolving situation and there is no predicting what the situation might be next month or even next week.

“I’d usually travel internationally this time of the year, but with border restrictions in place, I thought it was a great opportunity to see my own backyard.

“The flights weren’t cheap with such high demand, but it’s worth it knowing I’ll soon be reunited with my family and friends.”

Head of Aviation at Canberra Airport Michael Thomson said demand is only expected to increase with today being the last day of term for ACT schools.

“There is a huge pent-up demand to travel and we have already experienced this with near-full flights to Adelaide after the border re-opening last week,” he said.

“We expect our Brisbane and Gold Coast services to be extremely popular leading into the school holidays.”

Capital Retro - 33 minutes ago
"The cost of retrofitting was estimated to be about 17 per cent of the estimated capital cost." Gee, I didn't think rubber ba... View
News 243

Yinan Zhang - 46 minutes ago
Thank you for referring to the appropriate information source Rosie, I like the way you have approached this delimma. Yes and... View
News 26

chewy14 - 53 minutes ago
JC, No spin here, just facts. Whatwik claims that others have had to backtrack on their plans. Except none of the other state... View
Lifestyle 35

Ali McNally - 56 minutes ago
Nadine Pickersgill next year! View
Lyn Scougall - 10 hours ago
Margo Bellis it’s just the most beautiful garden. I think you told us about it and we went there 👍 View
Opinion 50

Futureproof - 1 hour ago
Why exactly, does the ACT, population smaller than the average LGA in Sydney, need this position? I can only guess that she w... View
Community 5