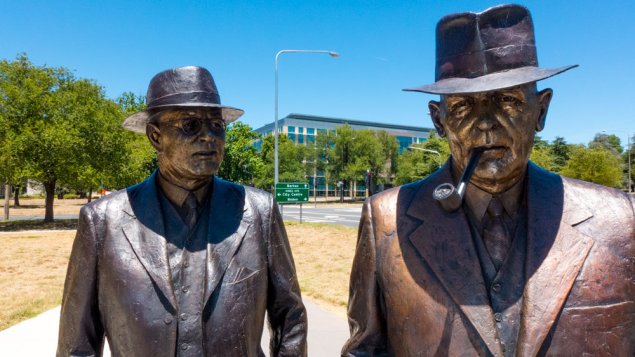 Public sculpture commissioned in the memory of our dignitaries has been known to cause a stir amongst art lovers as well as those who take a position on public art.

In recent days there’s been chatter internationally about a statue erected back in 2009 to honour Lucille Ball, which sparked a Facebook group titled We love Lucy! Get rid of this statue. It now looks as though the statue will be replaced soon. I have to admit that the sculpture is really weird – what were they thinking?

Canberra has been served well with public art pieces, most of which I like and several not so much; but that’s life. Public art programs in Canberra have had their own checked history but despite this I believe that the city needs an ongoing well-funded public art program. It’s a good look to have many styles of art outside in all sorts of locations but it needs a particular intelligence to get it right.

In amongst the present lot across Canberra we have a small selection of memorial figures. The most formal is the statue of Edmund Barton, on Kings Ave outside the Edmund Barton building. It was meant to be the first of many in that very traditional ‘up there on a podium’ style and luckily this was not followed through. 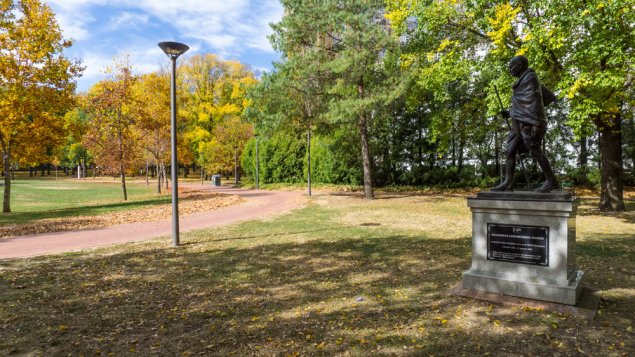 The placement of such memorial works is often not so well resolved. Gandhi’s statue in Glebe Park always seems a bit odd as if the placement was in the tradition of plonk art whereby some committee says ‘there’s a free space, let’s plonk it there!” There could have been a better location and some special garden design work applied to surrounding area to make a far more important statement and to encourage people to stop and take it in the reasons for the memorial.

I really like the casual attitude of statue of Bob Menzies caught walking by the lake as he often did. Just for contrast, the statue of La Perouse at Red Hill shops, while a fine enough piece of sculpture, looks as though he has just realised he forgot to buy the milk or has just received bad news on his mobile. The statue of Confucius in Dickson, which I pass by regularly on walks, is very appropriate and much admired. Another that has been well accepted is the ‘Stepping Out’ lady with her hat and handbag at the Hughes shops.

While there are several other realistic sculptural pieces I could mention, the main reason for this post is to focus on the most successful of the realistic memorial pieces.

This is the John Curtin and Ben Chifley pair last seen walking close to Kings Avenue on their way to Parliament. The work was placed there because the location is as close to possible to where they were photographed. I have observed this artwork often and usually smile a little when I drive past. They still look so real as if they were chatting away as they walked. The placement is spot on for historical reasons—but…

Unfortunately the location is a very isolated spot. For such a wonderful sculpture to be set in such a boring spot is a shame. I suspect that not many people make the effort to wander over to have a closer look. The only ones who probably appreciate the work are the local workers as they rush by between meetings or on their lunchtime walk.

At the moment the area nearby is a wide-open space of almost dead grassland. The solution would be for someone creative in the NCA* to think about commissioning some enticing landscape design work to encourage people to visit the area. Even a significant barbecue and picnic area would be an attractive proposition; much like the very successful one near the Science Centre that is often used for meetings, family gatherings and the occasional music group eating and playing music.

Seriously, this very fine sculpture needs to be enjoyed by more people and therefore more people need more reasons to wander into and use the areas nearby— is it that hard?

Congratulations to the artist Peter Corlett and to those who commissioned the work.

* Based on my observations of the NCA, I am not sure if I can justify using the word ‘creative’ and ‘NCA’ in the same sentence.

What are your favourite public artworks in Canberra?

Maddie Ten - 25 minutes ago
Governments about to bust down on people in love dynamics and divide, now, are they? View
Kim Bal-Al - 53 minutes ago
Relationships, especially long-term ones come with a lot of compromise. Some of the things people say they want from a relati... View
Kim Bal-Al - 57 minutes ago
Alyssa Stuart maybe they were just fed up with hanging around their partners all the time and that's why they wanted a girls... View
News 51

John W Crawford - 25 minutes ago
Does that reinforce the old saw " dead men tell no tales"???... View
Linda Stapleton - 53 minutes ago
This could lead to some rather nasty side issues.. what if someone were to catch an idiot breaking into their home..do they b... View
Shari Tiger - 1 hour ago
I’m pretty sure the speeding fines at the infamous Northbourne Ave and London Circuit intersection have brought in enough $... View
Public Sector 57

Anthony Philip Parker - 1 hour ago
I'm feeling hungry just looking at that breakfast. View
Jasmine Elliott - 4 hours ago
Kynan Elliott you could do this View
Jane Farrugia - 5 hours ago
Went there for lunch the other day. Service was great, very friendly, food was really good, will definitely be going back🤗 View
News 13

JS9 - 1 hour ago
Whether they should or not, the markets do care, because the credit ratings invariably drive the interest rate at which insti... View
JS9 - 1 hour ago
To be fair - an implicit guarantee exists in the form of the RBA. Because it can always print money and buy Government bonds... View
Heavs - 2 hours ago
Dear Chewy and JS9. Thanks for pointing out how things actually work inside government finance. But actually, here is another... View
Community 8

The outsourcing of Australian Public Service (APS) work, including the use of consultants, has been described as an industry full...
News 51

ACT residents will soon be required to self-submit a report online when they are victims of certain crimes, including house...
Opinion 32

Canberra Day Trips: There’s plenty to see on the road to Gundagai

@the_riotact @The_RiotACT
Businessman Trevor #Kennedy, who died this week aged 79, is remembered for his role at the flamboyant height of the Packer #media empire, but he was also a generous donor, a passionate Australiana collector, and committed to the NSW South Coast https://t.co/omWhd2qD1b (39 minutes ago)

@the_riotact @The_RiotACT
RT @Breaking_247: ACT Health has confirmed eight new cases of #COVID-19 in the ACT, and there are no confirmed cases of the #Omicron varian… (52 minutes ago)

@the_riotact @The_RiotACT
In a tough year for #business, the @CBRBusiness has reported steady membership and new services for its members https://t.co/RSQ0GnCSmk (1 hour ago)