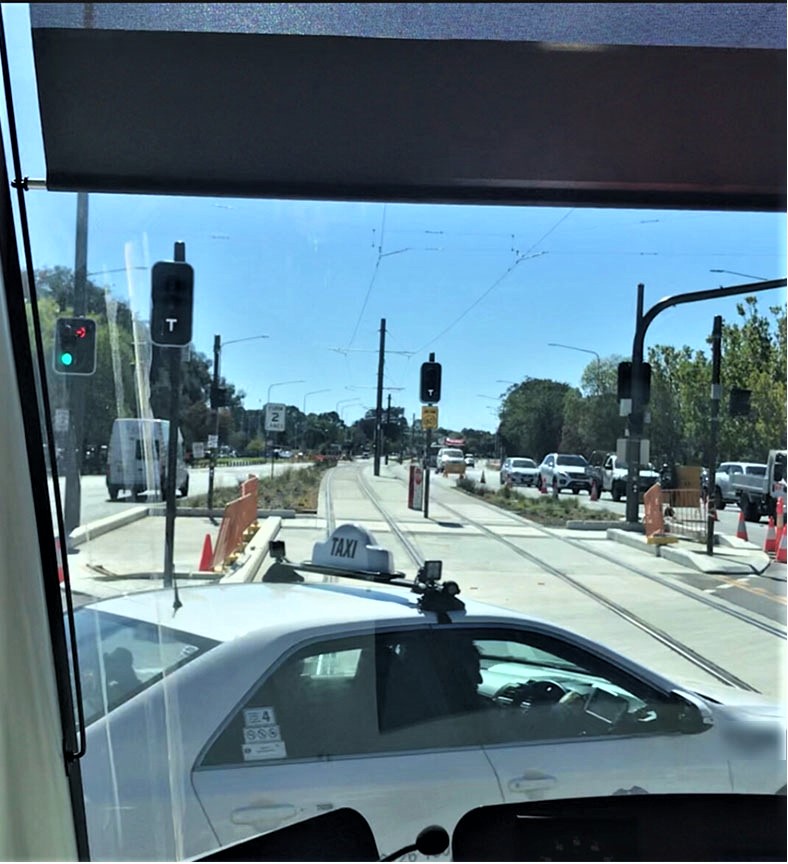 The light rail vehicle came to extremely close to hitting the taxi which is sitting in its way on Northbourne Avenue. The image is taken from dash-cam footage from the front of the LRV.

A car was driven along light rail tracks during peak hour in Gungahlin last night (April 8) and a new photo has come to light of a taxi only centimetres away from being hit by a light rail vehicle (LRV) as concerns over safety issues surrounding the new mode of transport continue.

Last night commuter Steve Ward photographed a car being driven along the light rail tracks near Gungahlin Marketplace just before 6 pm, taking to social media to say “this car identifies as a tram”.

Transport Canberra customer service staff looked on in alarm as the car drove along the tracks at peak hour, with the next LRV due to arrive soon. 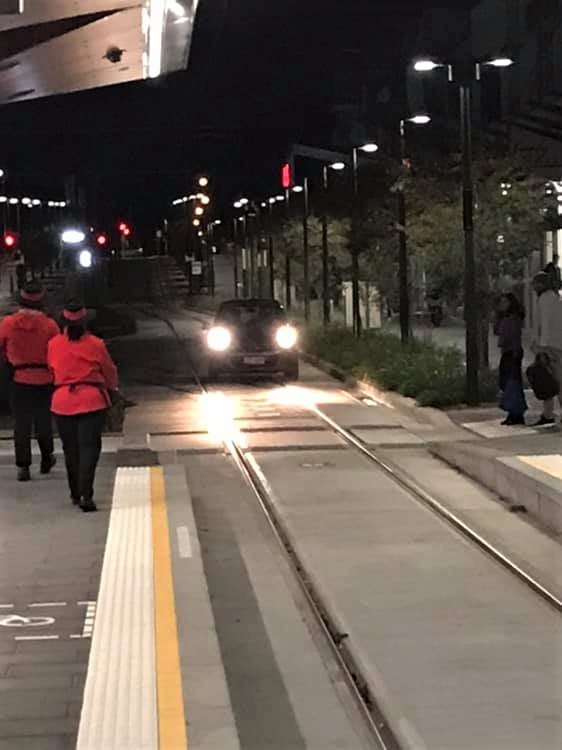 The car is shown driving along the light rail tracks at Gungahlin just before 6 pm. Photo: Facebook (Steve Ward).

A Transport Canberra spokesman said that the car ended up reversing off the tracks of its own accord and did not cause any incidents or disruptions to light rail services.

However, Transport Canberra does not yet know why the car was on the tracks and is investigating the issue.

Meanwhile, a new image from LRV dash-cam footage has been released to Region Media which shows just how close the LRV came to hitting a taxi which was stopped in its path along Northbourne Avenue on April 11 (prior to the April 20 official launch).

In this incident, the taxi driver finally realised the danger and just managed to drive off the tracks before being hit.

“Incidents like these should remind all Canberrans to be safe around light rail,” Mr Rattenbury told Region Media today.

“The vehicles are big and red—the tracks are fixed in the ground—so there’s no excuse for getting in the way of light rail,” he said.

“Fortunately in these instances, the drivers quickly rectified their mistakes and no-one was injured.”

The two incidents are among a series of accidents, near misses and safety issues to plague the light rail project, which have included a pedestrian being hit and a LRV driver running a red light just during the testing phase of the project.

On April 12, the ACT Government ramped up its safety campaign ahead of the light rail launch by releasing a video compilation of near misses between motorists/pedestrians and light rail vehicles to caution Canberrans to be more alert on the roads.

The video showed cars failing to obey the signals and entering intersections in front of the LRV as well as pedestrians making a mad dash in front of the moving vehicle.

At the time, Mr Rattenbury said interstate experiences show the first few months when a new light rail network opens are when road users are most at risk.

Mr Rattenbury asked riders, pedestrians and cyclists to share the road with light rail, take road safety seriously and not to take dangerous risks so they don’t “become a statistic”.

“Everyone must be patient as they adjust to sharing the road with light rail, especially during peak hour when a light rail vehicle crosses an intersection every four minutes,” Mr Rattenbury said.

Despite the light rail system not creating any new road rules for drivers, some Canberra motorists are obviously having trouble navigating the road since the introduction of the new public transport system.

Mr Rattenbury said the public needs to recognise that all crashes are preventable and they must continue to obey all signs and traffic signals around the tracks.

No one wanted these light rails in the first place

Jasmine Hawker yes we did actually.

Saw a car drive along the track at the Gungahlin Pl stop today about 3.30. she only stopped because she couldn’t go any further lol. Then she had to reverse back up as the crowd was laughing 😂

Not at all surprised at the poor driving displayed by a significant number of Canberra motorists. You only have to see how fast and irresponsible they are in a carpark let alone out on the street. But, hey, road rules are for other people not them !!!

The taxi picture is old. It was when they were testing the trams. Just inciting drama

The ACT has so many “ at grade “ conflicts between bikes, people, cars buses and other commercial vehicles that the government thinks it’s a good idea but people are hurt everyday by it. Rattenbury’s safety theory is unfortunately founded in politics rather than fact

“This is what happens when you let international licence holders drive with no further testing or education.”

This is what happens when you let international licence holders drive with no further testing or education.

David Taylor wrong. More likely what happens if you don't have a licence and borrow your mate's or brother's while they are off shift. Been years since there has been a look at comparing taxi drivers permits against their other documents.

Do you mean to say that someone from South Asia e.g. Philippines or India, could come here and drive the same way we do without any test or training?

David Taylor yes. Always have a close look at the driver's photo ID when you next catch a taxi.

Taxis need to stop. Let uber and other companies like uber to take over.

Serene Addicoat-Bower first uber and companies like uber should pay their drivers amongst other things expected from an employer.

Class action going on as we speak but who cares ,aye? as long as you get a cheep ride.

Max Fotios Begetis it's a choice for people to pay off their car. They dont have to do it.

Full commission base wages are legal.

Come on Canberra, melbournians have been doing it successfully for decades. How embarrassing.

These aren't safety issues, they are driver education issues.

A taxi doing something stupid and selfish? Noooo

Maybe some people need to get hit... Seriously, you cant cure stupid

ahaha, how about giving act police the resources they need to enforce the law as thats why this stuff happens. Police are under resourced

Clearly the issue you should be asking is not about if light rail is to blame. But how did these people get their license in the first place ?

The random closure of intersections in Northbourne Avenue adds to the problems.

Bakhtiyar Abdullah Canberra for u

Nathan Stack - 39 seconds ago
Tenants' Union ACT we litteralty just had this done to us in the middle of a pandemic because we wanted possums removed from... View
Marc Blackmore - 48 minutes ago
Another scheme to disincentive investors into the market reducing supply and end result is more pressure on rent rates. The o... View
Jeffrey Brown - 53 minutes ago
It's a great idea. It should definately apply to a situation where the Landlord does not honor the Lease Agreement through th... View
News 5

Aaron Nicoli - 54 minutes ago
It’s also so much safer now… 60km/h jam brakes on for the camera, accelerate back out to 60… It’s achieved nothing fo... View
Phil Hogan - 1 hour ago
Got to pay for the tram 🙄 View
mark boast - 7 hours ago
Is a speed limit a “never exceed” or a permissible maximum plus/minus 10%? Cameras don’t image opinion. Time to move on... View
News 3

Capital Retro - 11 hours ago
I don't think I said nuclear power is the only economically viable alternative to coal, in fact it is the only alternative to... View
show more show less
*Results are based on activity within last 7 days