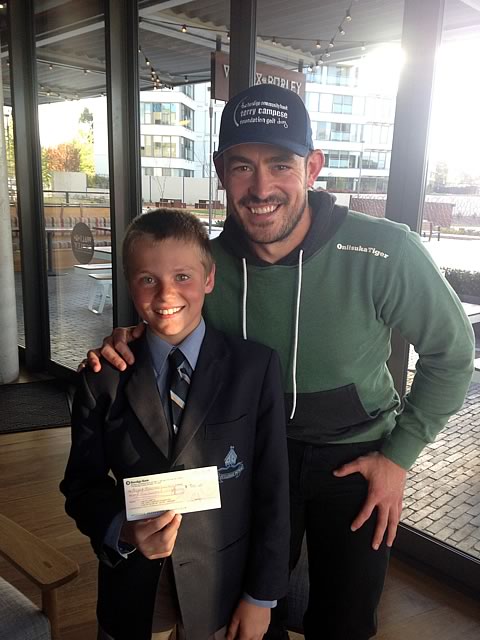 Less than four weeks until kick off…

Thomas, aged 10, of Canberra Grammar School was awarded the inaugural 2014 Rookie Stella Fella in August for his raising of funds and awareness for the work done by Project Futures Limited who assists women and children who have been trafficked and exploited, in Australia and South East Asia. He also received a Fred Hollows Schools Award in September and met with Terry Campese from the Terry Campese Foundation to discuss his fund raising event.

Thomas’ major fund raising event is a Celebrity Touch Football Game on Sunday 9 November 2014 at Greenway Enclosed Oval. The money he raises will be used within Australia to assist women and children who have been rescued from human trafficking and slavery.

“I want the afternoon to be a fun afternoon for everyone. My mum and I have organised a jumping castle, balloon modeller, face painter, mini markets and my favourite, a slushie machine” says Thomas. “The mini markets include The Body Shop, Candles by Lisa, Rachel Bird & Co Solicitors, badges, scent creations, Christmas decorations and heaps more fun stuff.”

“We are super proud of the effort Thomas has put in to organising this event. He has written to celebrities and local organisations and companies himself. We have helped him out with the financial and social media part of it” Thomas’ mum, Alanna tells us. “He has secured corporate sponsorship from Dr Tony Tonks, Rachel Bird & Co, Hedley Property Group, The Terry Campese Foundation, Blackhawk Logistics and a few others. He has also received donations of items from a range of people and companies, including GWS Giants, Shane Jacobson, Momento Australia, Dendy Canberra, Little Monster Chocolate, BMW and Shop Handmade. These donations will be raffled off on game day.”

“We’ve tried to keep the afternoon as cheap and family friendly as possible. Tickets are on sale now from just $5 per person. We are also selling a limited number of VIP tickets which include a celebrity meet and greet prior to the game and goodie bags full of great items from a variety of our sponsors. We encourage people to visit our website celebritysport.org to purchase their tickets and to follow our Facebook page to keep up to date with all the fun promotions and future events coming up.”

Buck Johno - 4 hours ago
From what I remember of night rider busses it was only over summer. View
PE TE - 12 hours ago
Sean Bishop but the Uber rapes have increased View
Kim Rumble-Kozjak - 22 hours ago
Jacqleequack it was all good fun until the two hour wait in the cab line, in stilettos, without a jacket in -2 🥶❄️ View
Property 28

Lihuan Panda - 10 hours ago
from the conversations and interviews, I think some players chose not to turn up for the briefings and missed out on informat... View
Hugo Walker - 13 hours ago
Penny Ford But isn’t he rich, famous and self-entitled? Surely that should persuade the authorities to cave in to his tantr... View
Pia Kivela - 16 hours ago
Personally we are in a pandemic so we should not be having this tournament View
News 5

Colleen Alchin - 22 hours ago
This situation is appalling! Forty minutes from the national capital and you need to buy bottled water to drink and wash clot... View
Tegan Gilchrist - 1 day ago
Amy LD and the clothes!!! Swapped out all out white sheets for greys. Blazer ruined. I now fill up bottles of water from my p... View
Community 1