Chisholm Vikings to host a brand new Battle of the Bands 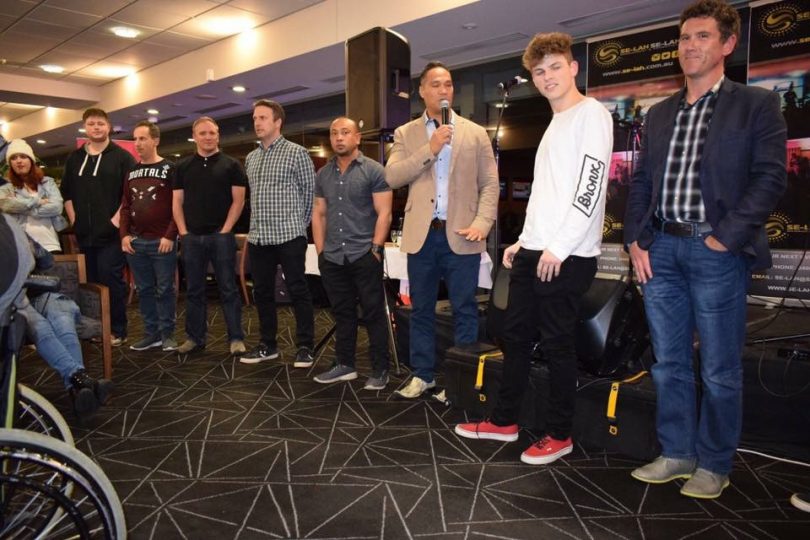 The songwriting competition hosted by Se-Lah Management & Promotions at the Gunghalin Lakes Club in 2017 was a taste of things to come. Photos: Supplied.

Following weeks of chatter about the future of live music in the Canberra CBD, one southside venue is gearing up to launch a brand new Battle of the Bands.

Canberra has a long history with band contests. Local acts like Moaning Lisa and Rubycon have launched their careers via the National Campus Band Comp in recent years with great success. Se-Lah’s Battle of the Bands looks likely to follow in that same tradition of encouraging local talent, with the concept being led by community need.

“It came about through venues looking for new activities to get people interested, particularly during the middle of the week,” says Randall Purcell of Se-Lah Management and Promotions.

He was quick to distance his format from what you might see on TV in the form of The Voice or Australia’s Got Talent, opting for a more artist-focused approach.

Purcell has a track record of nurturing young artists through previous events like open mic nights at Lanyon Vikings and his Talent Extraordinaire competitions.

Lanyon Vikings was the setting for a series of jam nights in 2016.

“It’s a showcase and promotion of local talent in Canberra,” says Purcell. “This is battle of the bands, but through the history of events like this over the past few years, we’ve seen a lot of youngsters in particular go on to really grow as artists; musicians like Sophie Rainbow, Natasha Campbell, Ned Philpot, Sasha Taylor, the list goes on.”

Contestants will be in the running to take home part of a tiered prize pool valued at over $6000, with each week’s performances adjudicated by a panel of experienced local musicians and industry professionals. The exact details of the prizes are, for the time being, being kept under wraps. But a combination of financial investment and professional development is a welcome opportunity for any band trying to find their feet in a challenging music industry.

“We’re here to provide them with the platform to start their careers, whether that’s locally or in the wider music industry.”

To enter, send the name of your band to Randall Purcell on 0406 035 755. He’ll get in touch with more details. But get in quick! Registrations close on Thursday 4 July.

What’s the best band you’ve ever seen at a band competition?

For more information about what’s on at Chisholm Vikings go to www.vikings.com.au

Many thanks for your support 🙏

I have tried to contact Randall to register my band to no avail. Does anyone know what else i can do?

Darren Goddard i always think of you when I hear Battle of the Bands :)

Barry Finch - 4 hours ago
Absolutely agree. Canberrans and the ACT Government should be able to decide on all issues affecting us, rather than falling... View
jorie1 - 7 hours ago
I support s.122 of the Constitution. You cannot just decide to change the Constitution because you feel like it. The people o... View
Andrew Turnbull - 9 hours ago
Paul Irving ok, now putting your own bigotry towards people of faith how about the actual issue itself. aside View
Lifestyle 33

Michelle Paul - 4 hours ago
They probably have to keep wearing their ring until the show is over.To throw us all off. View
News 73

Julie Macklin - 5 hours ago
Samuel Gordon-Stewart I'll try that next time. Thanks. View
Capital Retro - 8 hours ago
I can see the logic in what you say and thanks but this assumes that the person checking the others in knows who the others a... View
Samuel Gordon-Stewart - 8 hours ago
Julie Macklin With the NSW app, if you don’t have it installed, you can scan the code with your camera and be directed to a... View
Motoring 6

David Tickner - 6 hours ago
Alan Davey, sad but so true mate. So many whingers out there these days, with nothing better to do with their life unfortunat... View
Opinion 5

steve2020 - 8 hours ago
It's cross-cultural and inter-cultural collaboration. No different to many football teams or workplaces, for example. View
Kieran Livingstone - 9 hours ago
“What right do I have to answer such a question when I am steeped in white male privilege?” View
Maya123 - 9 hours ago
“Isn’t this a bit of a oxymoron… ur stating issues of Aboriginal culture while u have a all white band… seems ur just... View
Community 1

Ol L - 9 hours ago
Scary figures for these retrospective energy improvements. All homes September 2019- ‘The cost of the retrofits ranged betw... View
jorie1 - 10 hours ago
Well said @Acton. The price of the property dictates what you get. If you want to rent a 6 star energy efficient modern updat... View
jorie1 - 10 hours ago
I agree that a world view of housing should be to provide shelter first, and most houses in Australia do provide shelter. But... View
Opinion 12

JC - 10 hours ago
You could probably go back to Tuggeranong actually. And the reason is the design and the underlying principle that underpinne... View
News 2

Capital Retro - 11 hours ago
The workers should be in quarantine also. And why they are in a hotel is a mystery - they should be in a tent camp in the bus... View
News 22

Karen Feng - 11 hours ago
yes. current method seems to allow people to suffer till they die. My dad had cancer and he wanted to be euthanized. I was go... View
Opinion 27

Capital Retro - 11 hours ago
As well as being an apologist for the un-needed light rail, JC has also become a consultant for "Fix My Street" which is spon... View
Capital Retro - 11 hours ago
Well, it was pointless to replace one existing and successful mode of transport with another. The same "urban renewal" missio... View
show more show less
*Results are based on activity within last 7 days

@The_RiotACT @The_RiotACT
Dreaming of cocktails on the coast? A refreshed @CorrigansCove Resort in Batemans Bay could be the perfect spot for your next getaway https://t.co/2JGOZd9wkS (5 hours ago)

@The_RiotACT @The_RiotACT
Just because you're gluten intolerant or vegan doesn't mean you have to miss out on hot cross buns. Delicious options are out there thanks to a local legend https://t.co/yoEXnL3FJk (7 hours ago)

@The_RiotACT @The_RiotACT
ACT Liberal Senator Zed Seselja said he is open to giving the Territory the right to legislate on euthanasia, as long as the changes were part of a broader push for expanded Territory rights https://t.co/8sRQRBrSJC (9 hours ago)