Year 10 students have been relocated as a result of the vandalism. Photos: George Tsotsos.

At least a dozen windows have been smashed and classrooms have suffered water damage after another act of vandalism at a Canberra school on Saturday night (18 May).

Year 10 students and staff from Lyneham High School have been relocated to Dickson College for the remainder of the week after the school suffered a “serious act of vandalism”, the Education Directorate said.

ACT Policing are investigating the incident which they believe occurred between 9:15 pm on Saturday and 1 pm the following day.

An Education Directorate spokesperson said the directorate was working with the school to repair the damage and improve security.

“The ACT Government encourages all Canberrans to view their local public schools as community assets to be proud of and not seek to vandalise or damage these facilities in any way,” the spokesperson said. 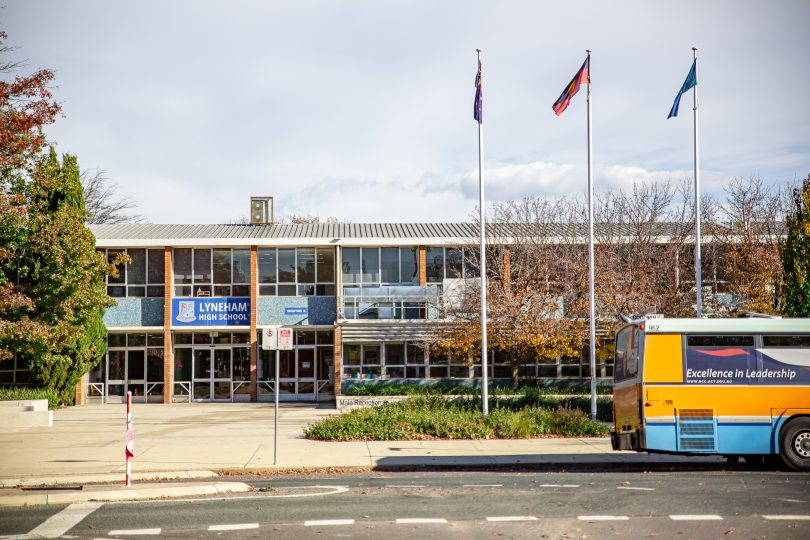 “The Education Directorate is working closely with the school not only in repairing the damage caused by this incident, but also generally in looking at strengthening measures to minimise this reoccurring.”

The incident is the latest in a string of vandalism attacks on Canberra schools this year, including an incident where offenders used a tractor to damage to the artificial turf field, perimeter fence panels and large bags of rubber compound at Gold Creek Primary School.

Last week a school took to social media to help track down three people who smashed windows and glass doors at St John Paul II College in Nicholls on 11 May.

Jimbo Lambert - 3 minutes ago
So what was the justification for reducing the Barton Highway section near Gungahlin Drive from 100km/h to 80km/h? It's dual... View
Martin Ross - 47 minutes ago
Steve Jones transport Canberra buses don’t have flashing lights. Only Qcity ones do. And the local private companies don’... View
Peter Ball - 5 hours ago
Gai Wil - So given that logic, a 5 kmh limit would be OK with you yeah? I mean, as you stated if you don’t speed (regardles... View
Property 30

Simone Moss - 53 minutes ago
Sarah Moss,maybe you need some alpacas 🦙 View
Lucy Coote - 2 hours ago
Tom Gilbert uhhhhh I mean at least we wouldn’t have to mow the grass… View
Amanda Robyn - 2 hours ago
Suzanne Feeney. See. Alpacas is what you need. 😉 View
Sport 5

Capital Retro - 3 hours ago
And all this "inspired" by this very disingenuous ad: https://www.youtube.com/watch?v=M_GBQhI1LsA Hello Bjorn? That's what gl... View
Brisal - 4 hours ago
99.8% of these cars will never be driven further than Yass. This car's range is perfectly fine for that. View
enjayjay - 4 hours ago
Look up the real world highway speed range of this and you’ll be properly disappointed. The polestar 2 which is same drivet... View
News 47

Cameron Fischer - 6 hours ago
Because you are a guinea pig. Grog shops and cafe's/restaurants are open, supermarket, and even your friendly brothel in fysh... View
show more show less
*Results are based on activity within last 7 days

@The_RiotACT @The_RiotACT
Sally Hopman reckons there's no need to #write yourself off if you are struggling with #computers. Just pick up the heaviest thing handy - ancient Remington #typewriters are always good - and take aim at the laptop https://t.co/5SoyRLLAhU (1 hour ago)