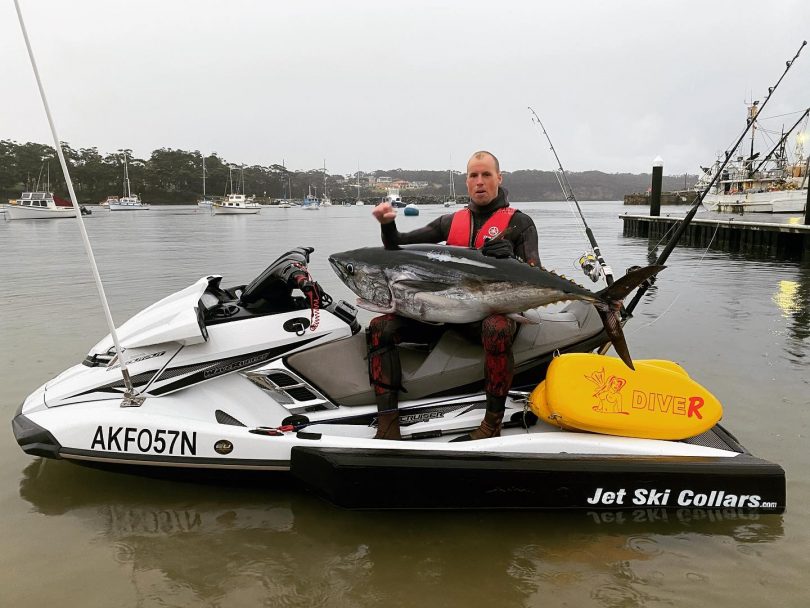 Spear-fisherman Glen Thurston with a southern-bluefin tuna he caught during July. Photo: Facebook.

A south coast spearfisherman who came face-to-face with a great white shark has warned people against going in the water with the prevalence of sharks due to the current migration of whales.

“It was right in front of me, about a car’s length distance away, and not even moving, just staring straight at me,” said Glen Thurston, a well-known former professional bodyboarder and ocean lover who lives near Ulladulla.

Glen told Region Media he was spearfishing at his regular spot at Burrill rock caves, about 4 km south of Ulladulla last week, when the close encounter occurred.

“I was trying to spear some snapper with a mate. We’ve dived this spot maybe 200 times and never seen a shark there before.

“It was in the afternoon and the water was a little murky from waves that were breaking on the rocks nearby,” he said.

“I’ve come up to re-breathe in a cave and then went back down and there was this enormous white [shark] staring straight at me.” 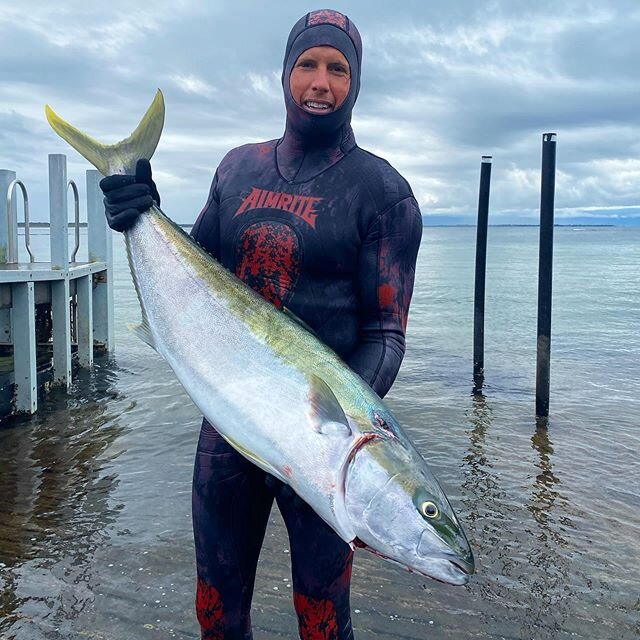 Glen said he has seen plenty of sharks while diving but never a great white. During his encounter, he was able to describe the experience in detail.

“I initially thought it was a bronze whaler, but as I was staring at it, we were having a bit of a face-off and as I was looking at it, I remember thinking this is the biggest shark I have ever seen.

“I could clearly see the big white underbelly. I was straight on with it so I couldn’t tell how long it was. All I could see was the diameter of it and it’s nose and eyes just pointing straight at me. I reckon it was at least 3.5 to 4 metres long.

“It didn’t even flinch. It was just fixed on me and was barely moving. There was almost no movement in its tail. It was just hovering.

“I was summing up whether it was going to make a move or not, and I’d decided that I wasn’t going to hang around, so I just pushed back against a rock wall and straight up to the surface. It all happened in about 10 to 15 seconds at the most, but it felt like slow motion.”

Glen said he then had to make another dive to alert his mate before they both had to run the gauntlet to his jetski moored nearby. It was there they noticed a colony of five seals and suspected the predator was more interested in the other prey.

“People have said to me that if you get to look at the shark and make eye contact, more often than not, it’s not going to have a go at you. They’re an ambush predator.

“I pray a lot too and I definitely said a few prayers after that.”

Glen also said he is usually filming with his GoPro attached but hadn’t recorded this chance encounter.

“In hindsight, I wish I had the presence of mind to hit record while this huge white is staring at me because it was a real moment where it was deciding whether to eat me or is it just looking at me,” he said.

“I’m not overly fearful of sharks, but to have this happen in my home patch of water was really unique.”

Glen also said there has been an increased number of sharks coming closer to shore, mainly due to whales migrating south after their breeding season in the warmer tropical waters.

Sharks have been spotted in the Bulli and Sandon Point area, north of Wollongong feeding on a dead whale carcass.

#SUPPORTOPERATIONS // Surf Life Saving Illawarra is #warning swimmers, surfers and divers not to enter the water at #Bulli and Sandon Point beaches due to a significant number of large #sharks in the area feeding on a dead #whale carcass.
? Rohnin Henry Micale pic.twitter.com/4BqBojtAwy

The encounter below (*language warning*) with a great white shark was filmed by Joel Oliver 50 metres off the beach at Bulli last Friday (11 September).

Glen said his experience with a great white shark has made him more cautious, but he would still maintain his love of the ocean.

“I’ll probably tone it down a bit now. I’m not going to dive in murky water, not after that, no thanks,” he said.

“My caution is to dive in good, clean water during a well-lit, sunny part of the day. There are obviously a lot of sharks about with the whales migrating and you don’t want to be that one-off.”

U wont to dance u gotta pay the band

If you’re spear fishing in waters that have the potential to be inhabited by large sharks than your stupid enough to be on the food chain.

There was a case reported in the press a few years ago of a professional abalone diver who had a similar experience. He saw it approach and went to the sea floor and hid among rocks. His face mask became dislodged in the scramble and, when he put it back on, the Great White was positioned right in front of him scrutinizing him! He said he literally screamed into his mouthpiece and stayed until it left. Swore he’d give up abalone diving after that!

Stay safe Glen .. it’s no longer low risk, like it once was.

If you’re in the ocean killing sea life, you need to be receptive to the idea that sea life might try to kill you too. The whole circle of life thing!

If you’re in the ocean killing sea life, then I guess you’ve got to be receptive to the idea that sea life might try to kill you. Tit for tat!