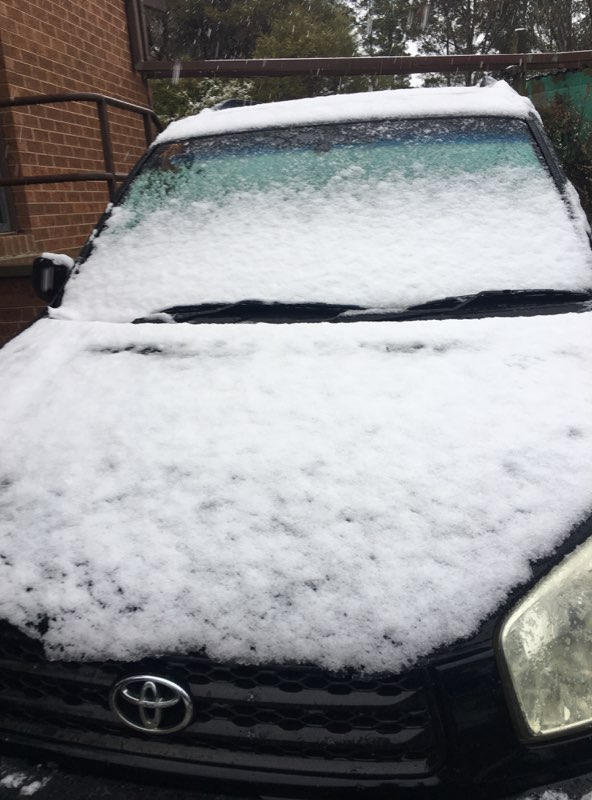 A snow-covered car at Carwoola last year. Get set for more of the same this week. Photo: Michelle Crouch.

Don’t pack away the puffer jackets, scarfs and beanies just yet – winter is still with us, and we might even get snow before the end of the week.

One forecaster has gone so far as predicting thundersnow – storms producing snow instead of rain – along with “blizzard conditions likely over the Snowy Mountains, Brindabella ranges and Victorian Alps towards the end of the week”.

The Bureau of Meteorology (BOM) says a series of strong cold fronts and low-pressure systems have been crossing Australia this week and people in south-eastern NSW will see the first signs on Wednesday with initial wind gusts of up to 45 km/h. 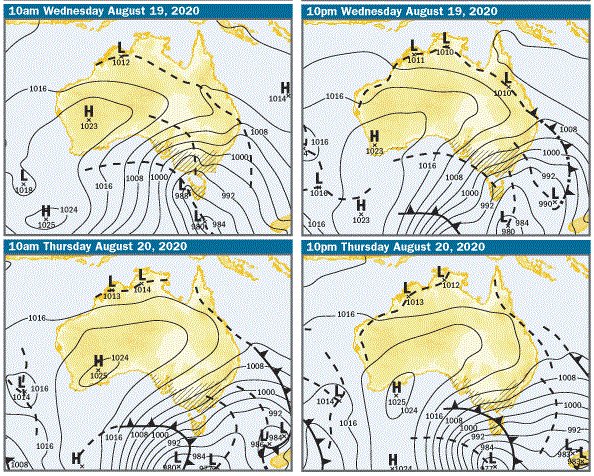 BOM meteorologist Diana Eadie said the winds could cause damage to areas of the southern NSW ranges and east coast on Wednesday afternoon and evening.

“Given the recent rain in the area, trees are likely to come down,” Ms Eadie warned.

The BOM has also issued a severe weather warning for the Snowy Mountains, ACT and South Coast for damaging winds, averaging 60 to 70 km/h with peak gusts in excess of 90 km/h expected during Wednesday and into the evening.

A sheep graziers warning has also been issued for those areas, with a risk of losses of lambs and sheep exposed to these conditions.

The winds will ease on Thursday ahead of another colder blast of air later in the day.

“Temperatures will plummet to four to eight degrees below average with snow dropping to low levels by Saturday,” Ms Eadie said. 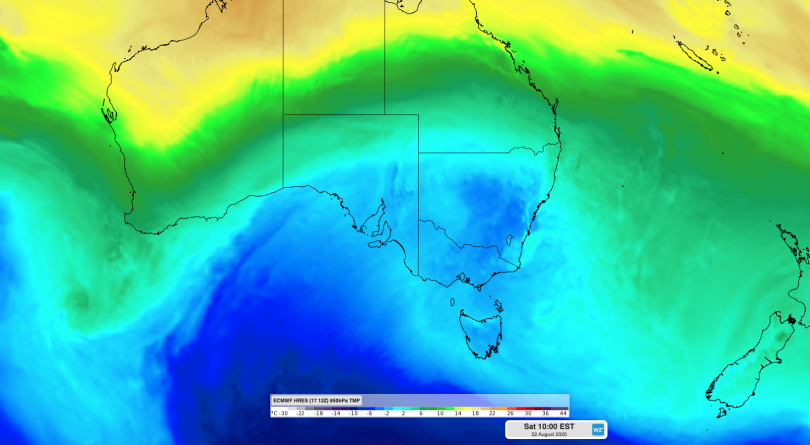 Forecast air temperatures over south-eastern Australia on Saturday morning, according to the ECMWF-HRES model.

Weatherzone meteorologist Ben Domensino said the strength of the cold fronts on Thursday will cause widespread rain, thunderstorms, hail, snow and blustery winds in South Australia, Tasmania, Victoria, the ACT and NSW.

“One of the standout features of this dynamic weather event will be a surge of very cold air over south-eastern Australia towards the end of this week,” Mr Domensino said.

Mr Domensino said some ski resorts and parts of the backcountry of NSW, the ACT and Victoria could pick up 80 to 120 cm of snow through to this Sunday.

“More than 10 cm of snow could also accumulate in central-western NSW on Friday and Saturday,” he added.

“Australia’s ski resorts have been plagued by poor snow and COVID-19 restrictions this year, with some not able to operate. For those that are open, the impending snow will at least partially make up for a lacklustre season to date,” he said.

READ ALSO: Tough times bring out the best and worst in all of us

The threat of damaging wind and rain has resulted in ACT Sport and Recreation closing all turf ovals for training purposes from Wednesday through to Friday this week (19 to 21 August).

Competition matchplay bookings are exempt from this closure period and may still proceed.

ACT Sport and Recreation will determine the fitness for weekend match play no later than 2:00 pm on Friday.

Players and spectators are advised to contact your sporting organisation for updates.

Meanwhile, the Bureau of Meteorology’s Manager of Climate Operations, Dr Andrew Watkins, said the chance of a La Niña occurring this year has increased to 70 per cent, roughly three times the normal likelihood.

“It typically also brings cooler and cloudier days, more tropical cyclones and an earlier onset of the first rains of the wet season across the north,” Dr Watkins said.

The last significant La Niña event was in 2010-11, which was Australia’s wettest two-year period on record, beating the previous record from the La Niña years of 1973-74. The last time the Pacific Ocean approached La Niña was in late 2017, but thresholds were only briefly exceeded.

I love the title of this one, Michael Weaver :P

Bad enough when I was out today (Wednesday). The weather says it will be worse tomorrow, and even worse the day after that!

“One forecaster has gone so far as predicting thundersnow “

Maya123 - 5 hours ago
Acton, Have you ever voted for Labor? View
Spiral - 6 hours ago
Opposition to same sex marriage (for example) is not exclusive to Christianity. Faiths that are sometimes violently opposed t... View
chewy14 - 8 hours ago
Acton, Except by definition facts don't change. Also, I find your definition of a "conservative" quite amusing. By that defin... View
Opinion 10

chewy14 - 5 hours ago
Dolphin, I find it hard to believe that someone who worked in the area doesn’t know something as simple as the topics I was... View
ACT Election 15

Capital Retro - 6 hours ago
That means it will be a Labor/Green government forever and there are signs on this thread that that is no longer palatable. View
HiddenDragon - 8 hours ago
It's not minority government - it's a coalition, with Labor too often following the Greens down the rabbit hole, and the Gree... View
Acton - 11 hours ago
Do you remember Pitch n Putt at Woden? A popular community recreational area. Now derelict and set aside for apartments.... View
Property 12

Capital Retro - 8 hours ago
I did not claim that interest rates cuts only happened now. They have been happening for 10 years and this was the policy of... View
chewy14 - 19 hours ago
Capital Retro, Firstly, most of the interest rate cuts happened well before the current crisis, so you can't just claim your... View
Brenton Higgins - 20 hours ago
Joshua we’ve had two elections on that already. Canberra decided. View
News 48

maxblues - 15 hours ago
Ban political corflutes like they have in South Australia. View
Lifestyle 1

steve2020 - 15 hours ago
It takes an appreciation of cultures to create a thriving arts community. Looking at the most culturally renowned cities, the... View
ACT Election 33

@The_RiotACT @The_RiotACT
Undecided about who to vote for in the ACT election? Our latest newsletter wraps up the last 7 days in local politics + all the other news of the week https://t.co/yP6PEPY6bp (5 hours ago)

@The_RiotACT @The_RiotACT
Heading to the beach during the school holidays? As part of a new COVID-safe strategy, beachgoers are being advised to keep a towel-length away from others https://t.co/g5Pa80HbTr (6 hours ago)

@The_RiotACT @The_RiotACT
More people in the community have likely been exposed to COVID-19 than first thought, according to blood tests conducted by researchers at the ANU https://t.co/oNYMAnzO81 (8 hours ago)