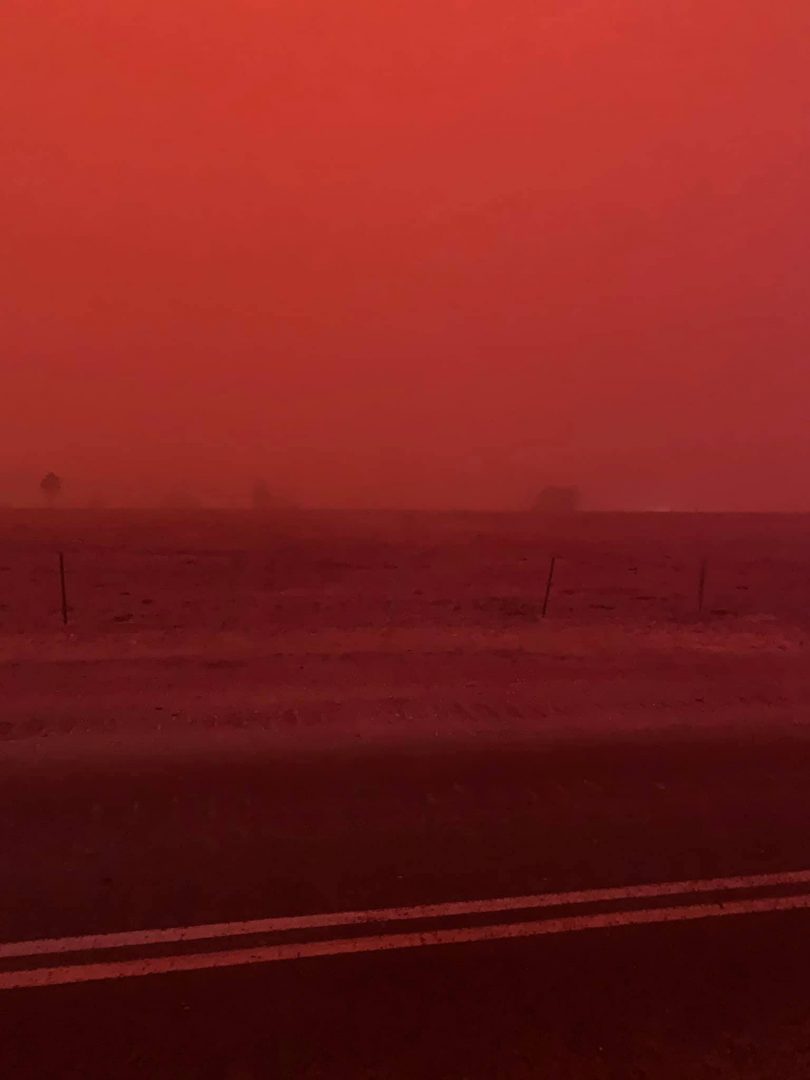 Queanbeyan Fire and Rescue images of the fire near Nerriga on Saturday. Photo: Facebook.

A cool change is helping to ease conditions after the now-massive Currowan fire flared between Batemans Bay and areas just east of Braidwood during catastrophic conditions.

There were reports of an intense fire thunderstorm system forming earlier today and ash “falling like snow” in Goulburn from the fire, which has now covered 144,000 hectares.

While attention has been focussed further north towards Nowra and Ulladulla, spot fires broke out today around Tudor Valley Road and Cargills Lane near Braidwood. Residents there and in Northangera, Mongarlowe, Charleys Forest Road and Nerriga were advised to depart for Braidwood if safe to do so.

All available Queanbeyan RFS staff and fire trucks are currently committed to the Currowan fire. They are mostly engaged in property protection in the Nerriga area where residents sheltered in the pub as the fire passed through around 6:00 pm. While the historic centre of the village was saved, it’s not yet known how extensive damage is in the area.

Current fire coverage for Queanbeyan is being provided by ACT Fire & Rescue.

Motorists are being urged in the strongest possible terms to reconsider their need to travel along the Kings Highway between Bungendore and Braidwood. While the road is still open a number of emergency vehicles will need to use the Highway and surrounding roads over the coming days.

The Kings Highway remains closed between Braidwood and Nelligen for the foreseeable future. The Araluen Road through the Deua has also been closed for safety reasons.

The Bureau of Meteorology says that the forecast cool change has arrived on the Currowan fire ground this evening, bringing with it much cooler temperatures and higher humidity.

“As we move into tomorrow we’ve got south easterlies along the coast and closer to the ranges. That will bring humid air off the ocean and help to ease conditions,” a BOM spokesman said.

“The forecast temperatures for tomorrow are mostly in the low 20s across the region and in the higher areas, around the Budawangs, will hover around the high teens.”

The NSW Rural Fire Service will host two Bushfire Information Sessions on Sunday, 22 December 2019 in Nerriga at 11:00 am and in Batemans Bay at 4:00 pm. These sessions are for residents who have been impacted by or likely to be impacted by the Currowan fire.

The Nerriga meeting will be held in the Community and Sporting Association Hall on the corner of Nerriga and Willow Forest Road, while the Batemans Bay meeting is at the Hanging Rock Function Centre in Hanging Rock Place.

Brendo Collins - 40 minutes ago
Maybe cause no one went to this actual facilty it is closing. Maybe if you attended it might still be open. View
Mookie Moo - 2 hours ago
This is so disappointing. I have not used this facility, but I have done weekly aqua aerobics as my main form of physical fit... View
Anne Maree Crowe - 5 hours ago
I feel for these people who have lost their water aerobics classes. Many elderly and people with mobility issues rely on swim... View
Property 16

JC - 7 hours ago
Cool story. Except that isn’t what has happened. No where near that much has BEEN spent on lightrail nor has what has been... View
nadine - 8 hours ago
Exactly, when our population was around 250k we had 3 hospitals. Our population as almost doubled but we only have 2 public h... View
News 23

Kay Pearce - 8 hours ago
Mrs Prowse was my grandmother and I can well believe she would walk to Manuka… well into her seventies and early eighties s... View
show more show less
*Results are based on activity within last 7 days