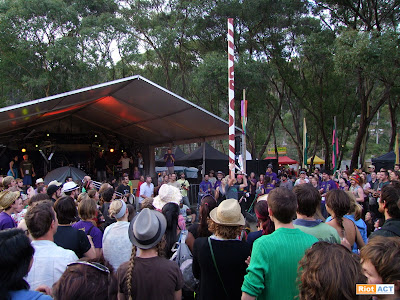 Corinbank, now Canberra’s leading alternative arts and music festival, is on again from Feb 26-28, 2010. Set in the pristine Corin Forest Mountain Resort and just a 45 minute trip from the city, Corinbank is currently accepting applications from performers. “Since it’s inception, Corinbank has showcased the best emerging musicians and performing artists in the region to large, appreciative audiences. Our policy is to reserve at least 50% of our performance slots for local artists — that’s something we are really proud of…” says Mark Bradley, Corinbank Artistic Director.

“More than 2000 people partied all weekend in 2009 and next year we anticipate even more.”
“Corinbank is all about community. At the festival, we help weave a rich tapestry of arts and artists, music and musicians, founded on self-expression, self-reliance, community and participation.“
“Importantly, as well as supporting up-and-coming artists and musicians, we intend to continue our award-winning philosophy to leave no trace on the environment.” “If you’ve been to Corinbank already, you’ll know what an incredibly fun party atmosphere is generated. And if you haven’t been yet, then you should put it on your list for next year and get ready to experience the best Canberra has to offer.”

Fringe Festival Axed
Mark says “It was a real shock to hear of the demise of the stand-alone Fringe Festival in the last few days,”
“Fortunately, we still have Corinbank which will continue to help local artists thrive.”
Online music applications are now open and close 14 September 2009, while visual and performance arts applications open shortly.
“I encourage applications from local performers for 2010, particularly those affected by the recent Fringe Festival announcement.” said Mark.

Corinbank 2010 tickets on sale in September
Pre-sales tickets will be available from mid-September — but get in quick, tickets sales increased by 80% from the first year in 2008. Marketing Director Nic Welbourn said “After a sell-out last year, we’ve managed to increase capacity by a small amount for 2010, but we expect tickets to sell out well in advance of the festival this year.”

Yet another Corinbank award nomination The 2009 event was critically acclaimed by the public and
artistic/performance communities alike and has continued to win official acknowledgements and awards.
This time Corinbank has been nominated for an ACT Landcare Award — you can vote for our People’s Choice award and leave comments at http://act.landcareheroes.com/profile/corinbank-festival/25/102/

Take kids by all means, just camp in the quiet camping area they set up for that purpose or put up with the noise from adjoining camp sites. I went last year and there were heaps of kids and kid friendly activities, such a great thing to see at a festival until it got to the kids bedtime (8.30pm) and we found ourselves being told off by grumpy parents because we were hanging out at our campsite when not at the festival stages. If they had have actually adhered to the camping plan it wouldn’t have been a problem.

Has anyone taken their kids to Corinbank? From the website it looks like there’s lots of fun activities for little kids. But I’d really like to hear from someone who’s done it – what age group did you take to Corinbank, did they have fun, and was it worth all the work on the parents part?

I think Corin is quite happy running themselves without a loudmouthed twit irritating everybody, thanks…

Maybe Corin could ask Jorian to run a fringe???????

To make a fringe for it, you would need to oppose its central tenets. Maybe Summernats could be re-branded as the Corinbank Fringe?

Seriously though: for a public investment of the same order as the fringe, Corinbank puts on a grand event. Can’t see how it could easily translate that into a fringe-festival-for-everyone type thing, but maybe its possible.

Definitely in my top three festivals of the year to date. Just a wonderful place, wonderful people, and I’ll hack off the superlatives there before you need a bucket.

Don’t think twice: get involved or rock up as a punter.

Acton - 25 minutes ago
Those who don't get it have never lived in a country where rights and freedoms are stripped away bit by bit while a docile an... View
Acton - 38 minutes ago
Try to see it as a principle. Once rights and freedoms are removed they are not easily clawed back. Totalitarianism succeeds... View
G'Lyz Wogly - 47 minutes ago
Samuel Gordon-Stewart you are missing the point. It doesn’t matter what information you check in with. Once it’s on your... View
Opinion 11

JS9 - 1 hour ago
Since really the design of Gunghalin sadly it seems to have all gone out the door in terms of the poly centric design. View
Capital Retro - 2 hours ago
In what way is Canberra "improving"? We have more social disamenities than ever before with ever increasing rates and taxes a... View
bj_ACT - 12 hours ago
Canberra is definitely improving and cities between about 400k and a million have great amenities without the negatives of ma... View
Property 42

JC - 14 hours ago
What sections of stage 1 are poorly designed and need fixing. As for the traffic lights you gotta be kidding right? As both a... View
Capital Retro - 16 hours ago
Three things to remember about the light rail: 1. The Greens want it. 2. It's all about urban renewal; it was never about pub... View
bj_ACT - 17 hours ago
I think you’ve raised some valid questions. There might well be valid answers from the ACT Government to those questions. I... View
Sport 4

If you want an example of hospitality grit, of a business team that picked themselves up from the lowest of...
News 48

The Check In CBR app will be mandatory from this Saturday (6 March), with $1000 fines for individuals and $5000...
*Results are based on activity within last 7 days

@The_RiotACT @The_RiotACT
The ACT will benefit from $16.5 million worth of projects under the Local Roads and Community Infrastructure Program. Find out what's happening in your neighbourhood https://t.co/sYlGM7C3wG (43 minutes ago)

@The_RiotACT @The_RiotACT
Whatever you think about assisted dying, Canberrans should be able to decide the issue themselves, says Ian Bushnell https://t.co/uCBheueQMJ (3 hours ago)

@The_RiotACT @The_RiotACT
Our latest weekly newsletter is out, recapping all the top local stories of the past seven days. Subscribe to get it in your inbox each Thursday https://t.co/sif1Mnd065 (13 hours ago)