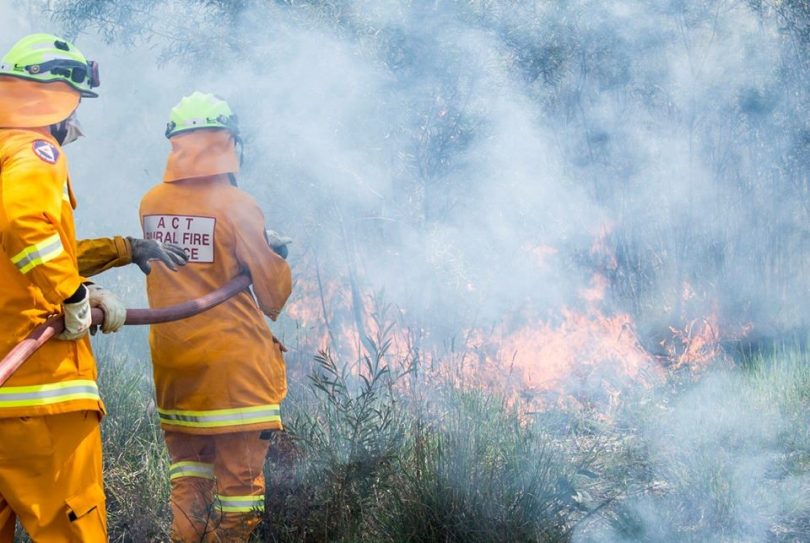 The Royal Commission into National Natural Disaster Arrangements has made 80 recommendations. Photo: Supplied.

Employment protection for emergency volunteers, an Australian-based aerial firefighting force and nationally consistent emergency information, such as air quality data and bushfire warning systems, have all been recommended by the Royal Commission into National Natural Disaster Arrangements.

The effects of climate change were explicitly recognized by the report, which also warns that traditional firefighting methods may no longer be effective in the face of extreme conditions.

The report found that the current arrangements for managing disasters needed to be overhauled to be able to cope with the increasing risk of more severe disasters in the future.

Among the 80 recommendations is that the Federal Government have the power to declare a national emergency and take action without a state or territory requesting assistance first.

“Extreme weather has already become more frequent and intense because of climate change; further global warming over the next 20 to 30 years is inevitable,” the report said.

“Integrating up-to-date climate and weather intelligence into scenario planning will reduce the risk that future extreme seasons are outside the realms of expectations. To date, regional climate modelling in Australia has been done on an intermediate scale, on an ad hoc basis, and would benefit from a more coordinated national approach.”

The Commission also flagged the importance of standardised equipment and information systems, including bushfire warning apps.

Fires traversing the NSW and Victorian borders would cut off on the respective border of each state’s app and ACT residents had trouble with the NSW Fires Near Me app.

There was a lag in transferring data between the ACT and NSW as well as trouble caused by fires changing names when they crossed state borders.

But the ACT will continue to use the app, Emergency Services Commissioner Georgeina Whelan said.

“One of the learnings for us was consistency in messaging, particularly with cross-border fires. We have been working very hard to ensure that the time lag between entering the data and it appearing on the app is down to a fine art now,” she told Region Media. 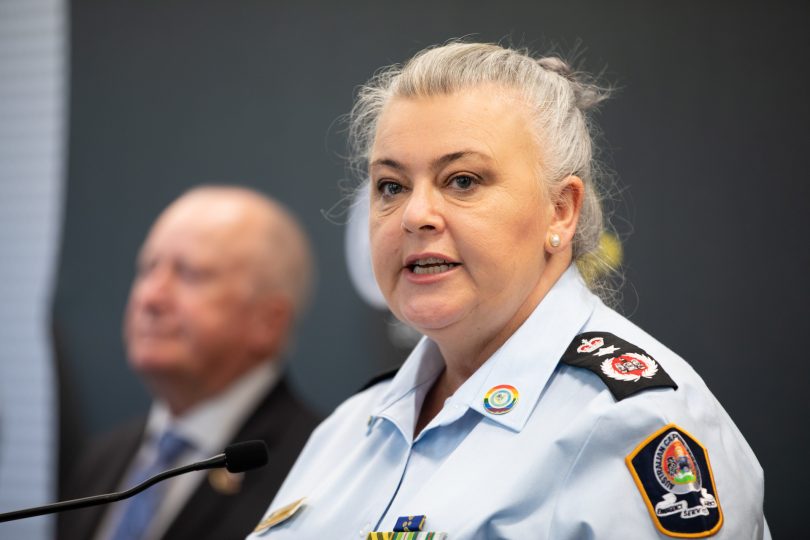 Emergency Services Commissioner Georgeina Whelan said the ESA had been working on better interoperability between the ACT and NSW. Photo: Region Media.

“Clearly, there is still some work to be done for a national mapping system and that is some time away, but we will be more considered in our maps and as a fire crosses the border, our maps can reflect that. There is a lot more understanding now that our maps should overlap.”

Despite the report mentioning the effects of climate change acting as a catalyst for more severe fire seasons, the correlation with emissions is largely buried, first being mentioned on page 60, professor at the Climate Change Institute Mark Howden told Region Media.

“The report acknowledges the climate is changing but the recommendations do not address the fundamental driver of climate change,” he said.

Mr Howden put this down to politics, saying that the Commission’s Terms of Reference focused on the risks of the global climate crisis to Australia, framing mitigating climate change as outside the scope of the inquiry.

The full report can be accessed at The Royal Commission into National Natural Disaster.

I don’t think the large aircraft, which are mainly used to drop retardant, are cost effective. The smaller aircraft are more accurate and can be deployed locally from makeshift airfields.

There is a lot of history about bushfires and from this their likely paths can be predicted. Permanent firebreaks should be established and maintained at strategic points so fire units can fight the fire and embers from a downwind stand-off position. It is pointless trying to fight these fires in mountainous and densely forested tracts.

Indeed, a large tract of land (10,000 acres I believe) was set aside as a firebreak by NSW along the Murrumbidgee corridor north west from Canberra in the 1940s. Whether it was developed or utilised is unknown but the land use was later converted and it was sold. It would have been handy if it were still there in 2003, perhaps.

A sovereign aerial firefighting force should have been established long since – it could have easily been afforded back in the days when the federal government was looking for things to spend the mining boom revenues on, and is small change compared to the hundreds of billions spent on hardware for external defence.

One of the more entertaining aspects of the response to the report will be those who want to use it as an opportunity to beat up on the federal government for not doing more to fight fires (because “fires don’t respect boundary lines on a map”) at the same time as they busily defend fiefdoms and systems based on those same boundary lines.

Lets debunk this notion now that climate changed was the cause of the 2019 – 2020 fires.

The Ororral Valley fire was ignited by a Defence rotary wing aircraft and the Creewah fire that consumed 2800 hectares before merging with the Big Jack Mountain fire was caused by fallen power lines at Glen Allen.

This couldn’t have happened 50 years ago.

“John Elliott And yet, it was written by the former chief of defence, a Federal Court judge and an ANU law professor. Could it be that they rigorously examined the evidence……….blah blah…….. and concluded it was climate change.”

They, like PM Morrison, weren’t at the fire front holding a hose either.

On ABC TV this morning the Blue Mountains mayor was claiming that the report confirmed “climate change fueled the bushfires”.

Hello, I thought it was the normal build up of fallen bark and dead wood that fueled it.

From the very brief reading I have done so far the RC Report could have been written by the Greens. Its just another load of BS from Lefty Losers. I am sure Mark Binskin was told to come up with as much BS as possible to make it sound good.

The ACTUAL FACTS of last year’s fires is that they were nothing to do with CC. They were part of a weather cycle that has been repeating itself for millions of years.

John Elliott Coupled with negligence and neglect by successive governments worried about costs and voter backlash from carrying out control strategies. Often known as Green and Red tape.

John Elliott And yet, it was written by the former chief of defence, a Federal Court judge and an ANU law professor. Could it be that they rigorously examined the evidence and used all their professional experience of leadership and analysis…and came up with the opinion that climate change was indeed a major cause? Hmmmm…….

Dave Ryan … They couldn’t possibly have examined the evidence because nobody submitted that the fires were a continuation of millions of years of Australia burning.

Dave Ryan … I didn’t realise that I could have made a submission but I didn’t know that until just a few days ago. I am not going to get into a slanging match with you but I am going to tell you just once that the fires were nothing to do with climate change !!

The 1974-75 bushfire season has been the worst on record. Nothing to do with global warming.

Brent Carlisle the fires at the end of the 19 century were actually worse. I think the federation fires is what they called them!
So yeah nothing to do with ‘climate change’

Brent Carlisle did the Royal Commissioner seek your expertise?

Brent Carlisle The largest area may have burnt that year, because of record rainfall in winter and spring but the fires burnt in a remote region of Western NSW. Which would have made it difficult to contain. It’s also hard to assess the effort spent on trying to contain it as few properties were threatened.

Lin Van Oevelen exactly right. The fires burned through areas so remote that the damage was only noticed when someone flew over weeks later. Nobody was there, the fires were likely far, far less intense than last summer and could have been controlled if anyone had actually noticed they were happening. You’re recycling a classic climate denier furphy.

Dave Ryan The upside is, I wouldn’t have known as much detail on that bushfire season (or any others the “We’ve always had bushfires!!!” crowd like to trot out) if it hadn’t been used by climate change deniers ad nauseum last summer.

I’m reluctant to believe this. 1974/75 and 1975/76 were La Nina years. I remember being in Forster in January 1976 and it rained every day. The local TV station was broadcasting information to farmers about what symbols to lay on the ground during the floods for assistance.

John Moulis The cause of the fires was said to be the fast growing grass and undergrowth because of more rain, so that does sound right. And even in La Nina years I’m assuming the far west of NSW would still get less rain and be hotter than the coast, but I have not checked the BOM records for that year.

The difference between reactivity and proactivity. 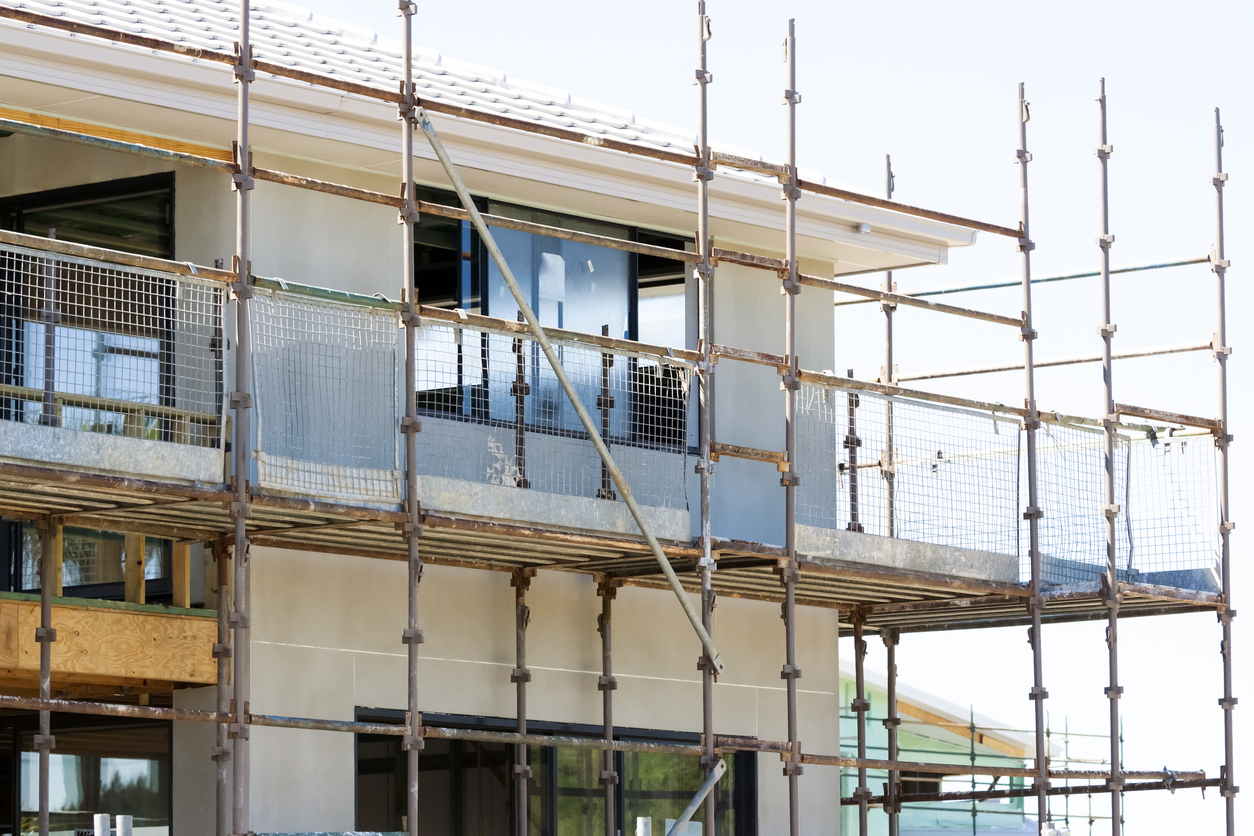