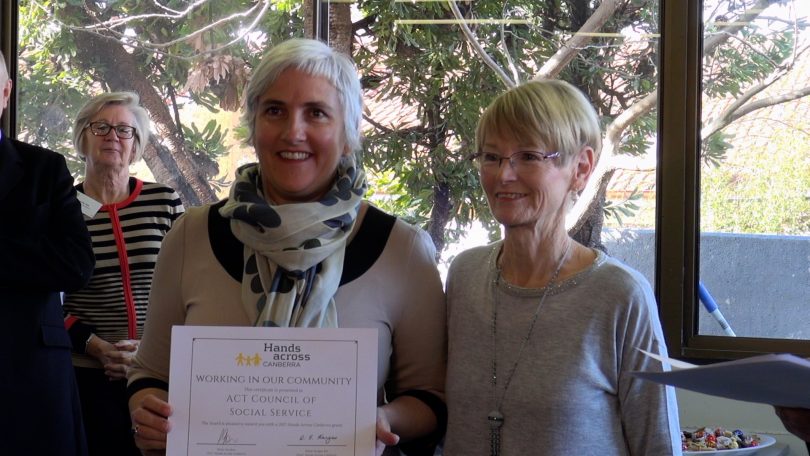 Susan Helyar, Director of ACT Council of Social Service with the Chair of Hands Across Canberra, Diane Kargas. Photo: File.

ACT Council of Social Services head Susan Helyar is stepping down from her role, but also forecasting a determined and loud election campaign from the sector around inadequate social services funding.

“Whoever is the new government has to recognise that the enormous growth and service transformation in community services has not been matched by similar growth in funding,” she told Region Media. “Community social services are now so under-resourced that government funding doesn’t cover award wages.

“There is a growing gap in quality and how fit for purpose our service facilities are, and therefore an ongoing unmet need as Canberra’s population grows.”

Helyar says that ACTCOSS has been working closely with their own members and other peak bodies to present a strong argument on better social services funding for consideration in the 2020 budget.

“Whole new suburbs have no facilities for youth and family services, for example, and no staffing growth in existing services to meet those needs,” she says. “Gaps in funding for community transport providers create waiting lists for transport to essential appointments and activities.

“There are gaps in housing assistance and homeless services that stop people from accessing support. The impact of that is overcrowding. Families who are struggling already bring another person in need into their homes as a temporary solution and that can lead to conflict and violence because the household is under pressure.”

Helyar says the net effect of the services funding squeeze is that issues aren’t addressed until they turn into a major crisis, causing social damage but also significantly increasing costs.

“That often happens with children and young people who cannot get access to support and services early on in a problem,” she says.

Part of the problem is that Canberra has very high social and economic norms. That means that when people fall between the cracks, they do so hard and fast. The biggest growth in people seeking food assistance in the ACT is among those who have jobs but don’t have enough hours or income to guarantee they can put food on the table for their family.

“These people’s income is entirely taken up with housing and bills. It’s a deeply corrosive thing not to be confident you can put food on the table. It erodes your sense of self, your social connectedness and your hope for the future.”

She characterises the services issue in three parts.

First, that current government funding arrangements bear no resemblance to the cost of delivery (including paying award wages).

Second, that Canberra’s population growth and changes in the patterns of demand have not been met by growth in funding in the areas of need.

Third, there hasn’t been sufficient growth in prevention, early intervention and strength-based services that reduce the cost for high-level crisis services.

“We are simply not spending money in the right places,” Helyar says.

In the 2016 election campaign, ACTCOSS identified complacency from government in the conversations she held with stakeholders. She says that seems to have changed.

“I’ve been pleased to hear the Chief Minister and others, including the Opposition, saying they understand that averages don’t tell us what we need to know about the city,” she says.

There seems to be a greater focus on costs of living in a more diverse range of households, and she sees this as a positive move towards identifying the real areas of need.

“If we rest on our laurels, the consequence is that we’ll have a reduced cohesiveness in the city, increased social exclusion which leads to violence, crime and misery, and greater associated costs,” Helyar says.

“Health and education are vital but so are community services. They are the essential third pillar in our community.”

After seven years with ACTCOSS, Helyar is moving to the ANU, where she’ll be the director of residential experience.

“I felt that ACTCOSS was in a good place in own strength and resilience as an organisation. After almost seven years, I have learned a lot, enjoyed seeing our advocacy campaigns deliver good outcomes for people in the ACT and am ready to try something new.”

Such a wonderful advocate for vulnerable populations! All the best

They have a tram to conventional pay for.

Thank you for all the work you have done during your time at ACTCOSS – you have made such a vital contribution through ACTCOSS to our community and our region. We value the work of all at ACTCOSS. Congratulations and best wishes to you Susan.

All the best Susan for your next adventure, and thank you for your strong advocacy over the past seven years. Will miss your wise counsel. 🌷

Susan Helyar your voice was heard with my listeners. You have made an important contribution in our community. Thank you

ACTCOSS has flourished under your leadership Susan. You will be missed. Thankyou for being such a fierce advocate for the community and the sector. I’m sure you’ll continue to shine in your next role.

Susan Helyar such a loss to the community sector. All the very best at the ANU and do keep in touch.

ACTCOSS has come a long way under your leadership Susan. Wishing you all the best in your new role 👏👏🦋

So much admiration for your calm, strong and kind presence in the community sector. Your intelligence and compassion has helped many, many people I’m sure.
I always enjoy our conversations at a community/business event or netball sideline.
Wishing you much joy in your next adventures, Susan.

Jennifer Thompson many thanks!

Oh Susan. Why didn’t I see the memo! 😉 Looking forward to seeing you shine in whatever direction you choose. 😚😚

Thank you for all your work Susan!

Thank you for your wonderful service to the community, and vulnerable people in particular, Susan

We are so happy for Susan Helyar as she pursues new adventures. So grateful for everything she has done in the community. A little sad we are losing her. Thank you for everything you have done!

Susan Helyar on behalf of the whole community thank you so much for your years of dedicated service and your amplifying voice for those in need. Well done and congratulations on your next career move

Spot on! This government has been happy to remove support, services and community facilities from Canberra’s outer suburbs at the same time as removing public housing tenants from the inner city.

Unfortunately organisations like ACOSS won’t make complaints about the ACT Government whilst ever they rely on them for part funding. But good on Susan Helyar for raising this on her departure.