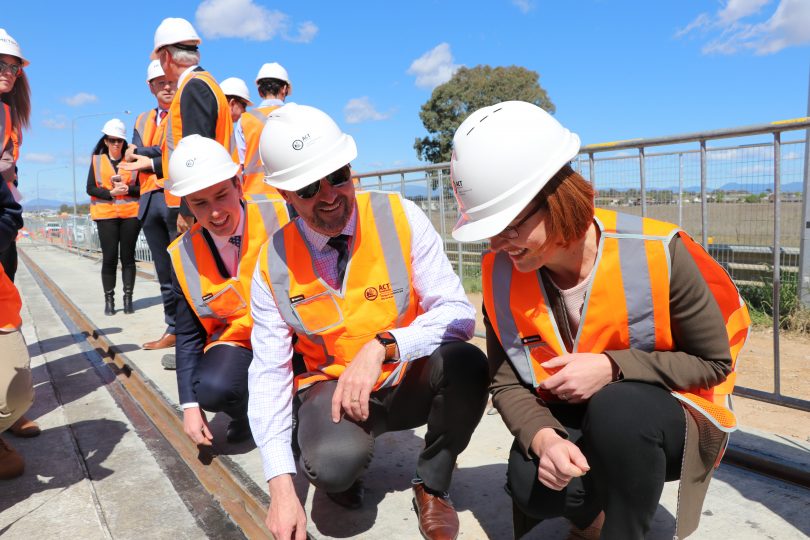 The first tracks of Stage 1 of Canberra’s light rail network have been laid on Flemington Road, Franklin.

The milestone came as the ACT Government announced the closures of four Northbourne Avenue intersections from October to December.

The Netball ACT Car Park will close from Monday 9 October 2017 to January 2018 for permanent earthworks.

The Northbourne Avenue Yowani Country Club bus stop will be closed until December and a temporary bus stop has been planned for 200 metres south of the current stop on Northbourne Ave. To view bus stop closures and route diversions please visit http://www.transport.act.gov.au/service-updates

Minister for Transport and City Services, Meegan Fitzharris said that the laying of the track was a sign of the construction progress.

“Laying the first tracks is a very significant moment in any rail project,” Ms Fitzharris said.

“Light Rail in Canberra offers an exciting opportunity to transform our city. It will deliver a truly integrated transport network that provides convenient, efficient, affordable and reliable options for Canberrans and visitors to move around the city.”

Work towards Stage 2 of the network, which will go to Woden in line with the Government’s 2016 election commitment, was also progressing well, with almost 5,000 Canberrans giving their input on preferred route options, alignment and stops in a recent consultation.

Transport Canberra and City Services said Canberra Metro would not carry out any major construction works on the Light Rail during the Christmas holiday period from 22 December 2017 to 2 January 2018.

I hope those rails are Made In Australia because precious little else is being made here for the Capital Metro Trolley Folly.

Rails aren’t Australian made (although I can’t remember where they are made either!). I’d like to know what is Aussie made if anyone could enlighten me…..

Why was this trip necessary? Anyone would think the tram project is his personal property:

Yet another expert slams the light rail as “a stupid decision” and ACT government spokesman blames the pre-self government Commonwealth for the planning problems.

Pity you didn’t take in parts of the rest of that article. If you did you may finally ‘get it’.

I “got it” last week in the mail JC. A rate notice with a massive increase without explanation.

Pity you didn’t take in parts of the rest of that article. If you did you may finally ‘get it’.

Toy trains and driverless cars. I would just like to get into Hospital please

I hope those rails are Made In Australia because precious little else is being made here for the Capital Metro Trolley Folly.

chewy14 - 4 hours ago
Kenbehrens, "potentially safer". We are all "potentially safer" if we never leave the house either, but luckily most of us un... View
JC - 4 hours ago
Chewy in this instance it is NSW who is doing something different and did so without consulting or advising the ACT who is im... View
chewy14 - 4 hours ago
You do have to laugh at their statements about "being more comfortable" with further changes because of the high Vax rates. T... View
Opinion 85

jorie1 - 4 hours ago
Hi Assiduous, I do agree that $500 per week is a lot of money - but the majority of that money goes to the ACT government in... View
assiduous - 4 hours ago
$500 per week is not low - it is enough to build a modest detached family home every 10 years. It is a reflection of Australi... View
Peter Jovanovic - 7 hours ago
So if it all gets too hard for the parasitic landlords and their parasitism isn't as lucrative as they hoped they'll just dem... View
News 39