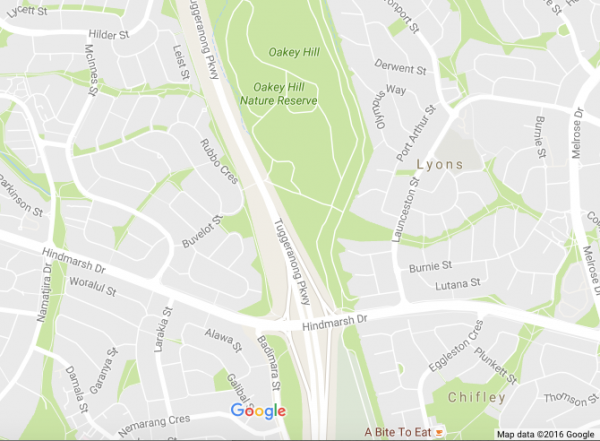 A four-car accident on the Tuggeranong Parkway on the southbound lanes just before the Hindmarsh Drive turnoff is currently causing major delays for traffic. Traffic is backed up at least 5km.

It just took me 20 minutes to travel from the Cotter Road on-ramp to the Hindmarsh Drive exit. Traffic is crawling along at a snail’s pace currently.

One car was being removed by tow truck when I arrived on the scene, with two more cars off to the side of the road, and one vehicle still to be cleared, with the left lane closed by police just prior to the Hindmarsh Drive exit. I would expect traffic to continue to move slowly for up to another 30 minutes as police clear the remaining vehicle and keep the lane closed to allow access for tow trucks to remove the other vehicles involved.

The four vehicles were a hatchback, a sedan, a small 4WD towing a trailer, and a ute. All cars had medium impact to the front of the vehicles, although the cause of the crash was not obvious. No ambulances were on scene, if there were any major injures then the patients had already been removed prior to my arriving on the scene.

Hopefully the left lane will re-open just prior to the start of the 5pm peak and traffic should flow normally from then but motorists may want to think about taking alternate routes if travelling in the next half an hour or so. Was not possible to get a photo as traffic was moving when I got near the scene, albeit slowly, and the police directing traffic meant I was not able to stop and legally take a photo, nor break the law and take one while driving either.

Zakzook Chico - 8 hours ago
Patrick J Pentony couldn’t agree more View
William Coats - 8 hours ago
So after 20 years this Labor Greens Government is ready to promise action. I guess we will have to wait and see. View
Patrick J Pentony - 8 hours ago
Rheyce Spears we are at the start of the twentieth year of labor greens gov in the ACT. Not sure you can really blame anyone... View
Opinion 3

dashing1 - 13 hours ago
Thip's Thai in Belconnen, for me. Humble setting, delicious food always served with a smile. View
Opinion 40

Dot Thompson - 17 hours ago
Hannah Tracey, is this for or you and Tom? View
show more show less
*Results are based on activity within last 7 days

@The_RiotACT @The_RiotACT
Multicultural Eats: Where to find the best Thai food in Canberra https://t.co/Btz4GZRJeu (9 hours ago)

@The_RiotACT @The_RiotACT
The ACT is expanding vaccine storage facilities at the Canberra Hospital in preparation for the arrival of the Pfizer COVID-19 vaccine https://t.co/sJOTHW08De (11 hours ago)