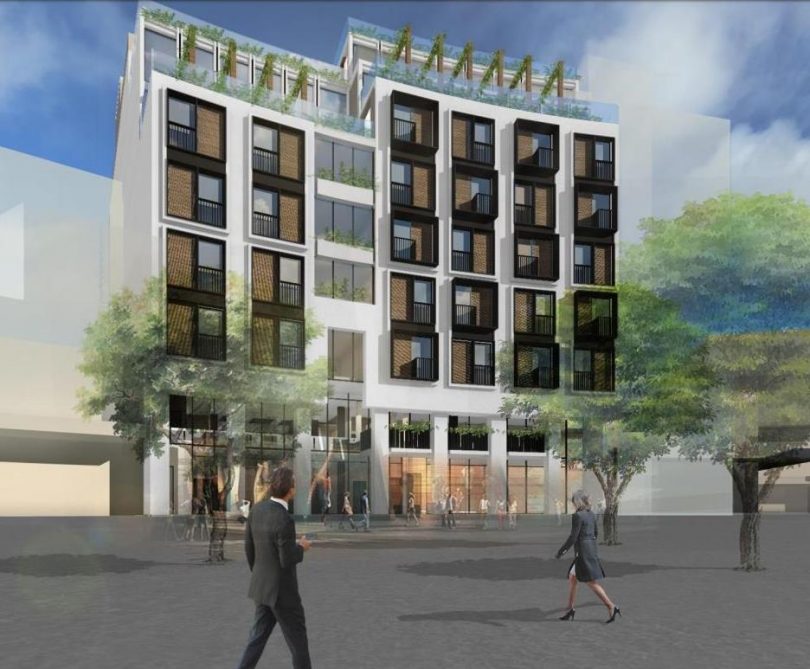 Canberra developer Geocon has scaled back its proposal for a 16-storey, five-star hotel in the city centre on Garema Place, with the development reduced to a maximum of 10 storeys for what the amended development application says is a more modest building, more in keeping with the future direction of the area.

Geocon, which owns and operates the Abode Group of hotels, bought the Garema Centre building at 70 Bunda Street in September last year for $13.35 million.

The site, on Block 5 Section 47 in the city, fronts Bunda Street on the north and Garema Place on the south and is occupied by a two-storey building with a basement level, with the ground floor consisting primarily of food and drink premises and a variety of commercial and retail premises on the first floor. The basement is vacant and the building will need to be demolished.

The amended proposal, prepared by Knight Frank Town Planning, says the maximum height will now be 35.2 metres, with the bulk of the proposed building at the Bunda Street frontage of the block extending to the full 10-storey height while stepping down towards Garema Place to six storeys.

“The proposed stepping back of the design provides an improved consistent response to the surrounding buildings and public domain into Garema Place,” it says. 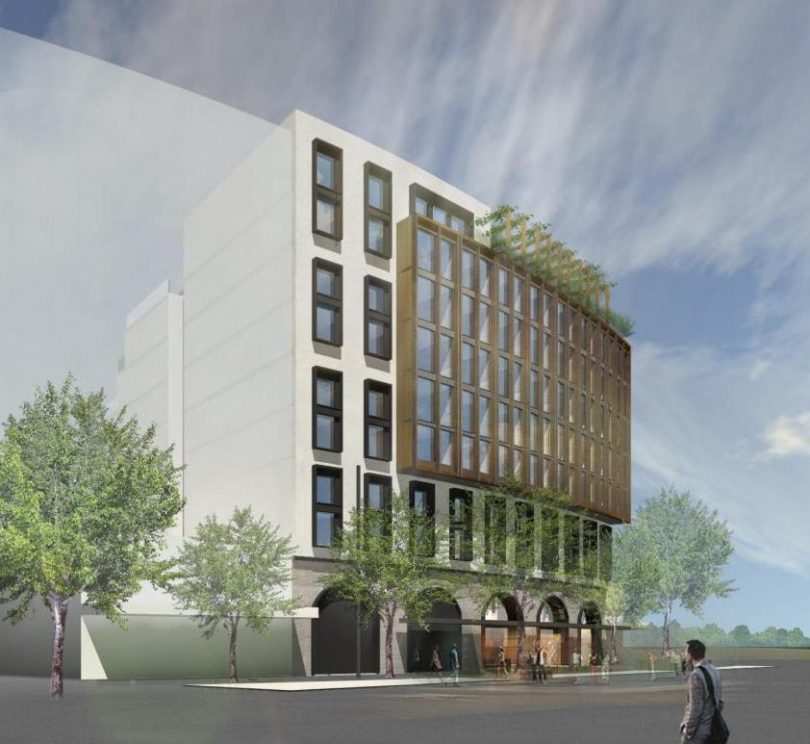 Geocon has also reduced the number of rooms from 233 to 191 in the hotel and mixed-use development, which will include a basement food hall, ground floor café and retail to Garema Place, a signature restaurant on the mezzanine level, and a roof terrace which will host a pool, gym and other amenities.

Designed by Fender Katsalidis Architecture with landscape architecture design by Oculus, the building’s key design element in the original development application was the landscaped core, with voids to the ground, mezzanine and level 1 above providing space for the planting of large trees and shrubs. The level 2 landscaped terrace was described as an urban oasis that will include trees, shrubs and ground covers to provide a lush outdoor garden setting complemented by the swimming pool.

But instead there now are now landscaped terrace spa pools on the upper levels, and a garden setting on the rooftop around the pool.

The amended proposal also increases the number of basement parking spaces from 21 to 47, with access to be managed by the hotel including a valet service. The planned car lift remains.

The proposal provides for active street frontages and awnings to protect pedestrians from the elements. Three trees will need to be removed and replaced on Bunda Street.

On the question of overshadowing, the proposal says the main pedestrian areas and routes will remain substantially sunlit, particularly between noon and 2 pm on the winter solstice.

“The proposed Canberra City Luxury Hotel provides the catalyst for the redevelopment of Section 47 and more broadly Garema Place,” the proposal says.

Giuliana Zaccaro, the word you are looking for is “have” not “of”, and the Garema Centre site on Bunda St is one of the prime sites in Civic, so you probably should think things through a bit before going on a carparking rant and suggesting a carpark instead of an actual building should be constructed there.

Not sure I can stomach another Geocon advertising campaign..what will they torture us with next??

I don’t think Civic needs more retail. More parking would of been a lot better.

Giuliana Zuccaro more parking? Civic is already one big carpark??? And I think the proposed retail will just replace whats already there

Yes but existing retail is already struggling why add more

Pity couldn’t scale back those in Belconnen. What happened to not blocking the views.

Kerry Jackson i don’t think views have been tested in court and I don’t think they hold any planning weight in the ACT. In NSW appeals against development based on views have been mixed the LEC have said in certain cases views need to be protected in other cases they don’t.

This is one of those rare instances where it almost impossible to tell if the revised version is significantly better or substantially worse than the original design.