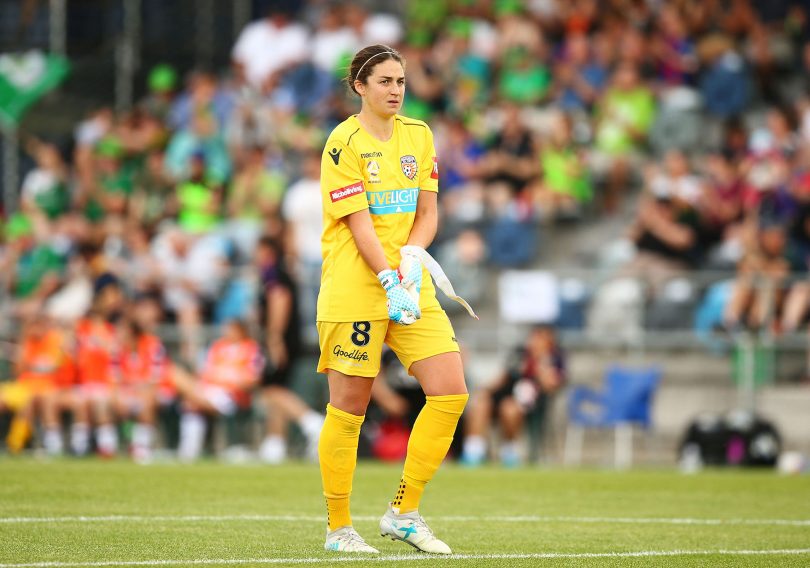 Melissa Maizels when she was playing for Perth last season. Photo: Supplied by Canberra United.

After making a name for herself in Perth during the past two seasons and becoming Glory’s first-choice keeper, Melissa Maizels is coming back home to the nation’s capital as Canberra United look to return to finals contention in season 11 of W-league.

Maizels spent two seasons in Canberra from 2014-2016 but only made a meagre four appearances after she was United’s second choice goalkeeper behind Australian representative Lydia Williams.

The 25-year-old was a part of Canberra’s 2014 championship-winning side but the Melbourne product said she has “unfinished business” in Canberra and now has a golden opportunity to stake a claim for the starting position.

“I cannot wait to be back,” Maizels said. “It has been two years since I was in Canberra and it feels like I’m coming home. My career started in Canberra, I was there as a second-choice keeper and I feel like I have some unfinished business.

“I want to come and play for the club as the number one.

“The fans are what I miss most about Canberra, so I’m looking forward to showing them everything I’ve learnt and the player I’ve become since they showed belief in me back then.”

United coach Heather Garriock was full of praise for Maizels and said she was looking forward to working with her this season.

“To have Melissa returning to Canberra is great for the team and the club as a whole,” Garriock said.

“When she was here last time she obviously was behind Lydia, but now I am very excited to have her ready to for this season. She has aspirations to play for the Matildas and that’s what I love in a player, someone who sets themselves challenges and a long-term goal.”

The 2018-19 Westfield W-League season is set to begin in late October.

Frank Trapani - 6 minutes ago
So, would This be an exchanged agreement with both countries to accommodate our different religious need when we go there?? I... View
Nick Thirgood - 31 minutes ago
It's called religion! Mankind's greatest fairy tale tax dodge! View
Imants Ezergailis - 34 minutes ago
John Wilson : Insurance companies already exclude many lifestyle choices from the cover they offer! View
Lifestyle 13

Gary Fynmore - 3 hours ago
If outdoor pursuits is your thing I can highly recommend Braidwood Outdoors. Dare I say it but it's a fantastic 'man cave ' B... View
News 86

Monique Neejchee Jenkins - 3 hours ago
Absolutely, and getting rid of the school routes is utterly disgusting too. View
Julie Macklin - 6 hours ago
Jeff Smith Maybe you one of the people who will not drop what they expect in a house/unit (thinking first home buyers here) t... View
Jeff Smith - 6 hours ago
Considering the last house in Narrabundah with roughly a 450sqm block sold for $1.2 million and the last similar size propert... View
News 45

Jennifer Chalmers - 4 hours ago
Such a tragedy. View
Ulpu Niemi - 7 hours ago
Tragedy upon tragedy in this battle. 😢 View
Alison Crawley - 9 hours ago
Please consider a donation to this refuge - it will be used for the good of the wildlife. Thankyou. View
Sport 4

Samuel Gordon-Stewart - 6 hours ago
Thankfully Socialist Radio no longer sullies our beautiful national day with its peculiar noises. As such, I hope the people... View
Opinion 126

Robert McMahon - 8 hours ago
Good to celebrate a nation that enables its citizens to openly criticise its institutions and national symbols. Many people w... View
JC - 8 hours ago
What about 1st Jan. Celebrate when Australia came into being when the colony became a federation. Nah won’t work that’s a... View
Wayne Weaver - 10 hours ago
You do know that Cook landed in Australia in April 1770 don't you? Just sayin! View
show more show less
*Results are based on activity within last 7 days

The ACT Government is being urged to boost public transport services and staffing to meet extra demand caused by thousands...
News 77

@The_RiotACT @The_RiotACT
Work has recommenced on Snowy 2.0 after the bushfires, despite major losses https://t.co/mf8yGTADO1 (21 minutes ago)

@The_RiotACT @The_RiotACT
The Defence Force is making its presence felt on and around the South Coast. Lisa Herbert caught up with some of the crew https://t.co/YEwr98vVtk (4 hours ago)