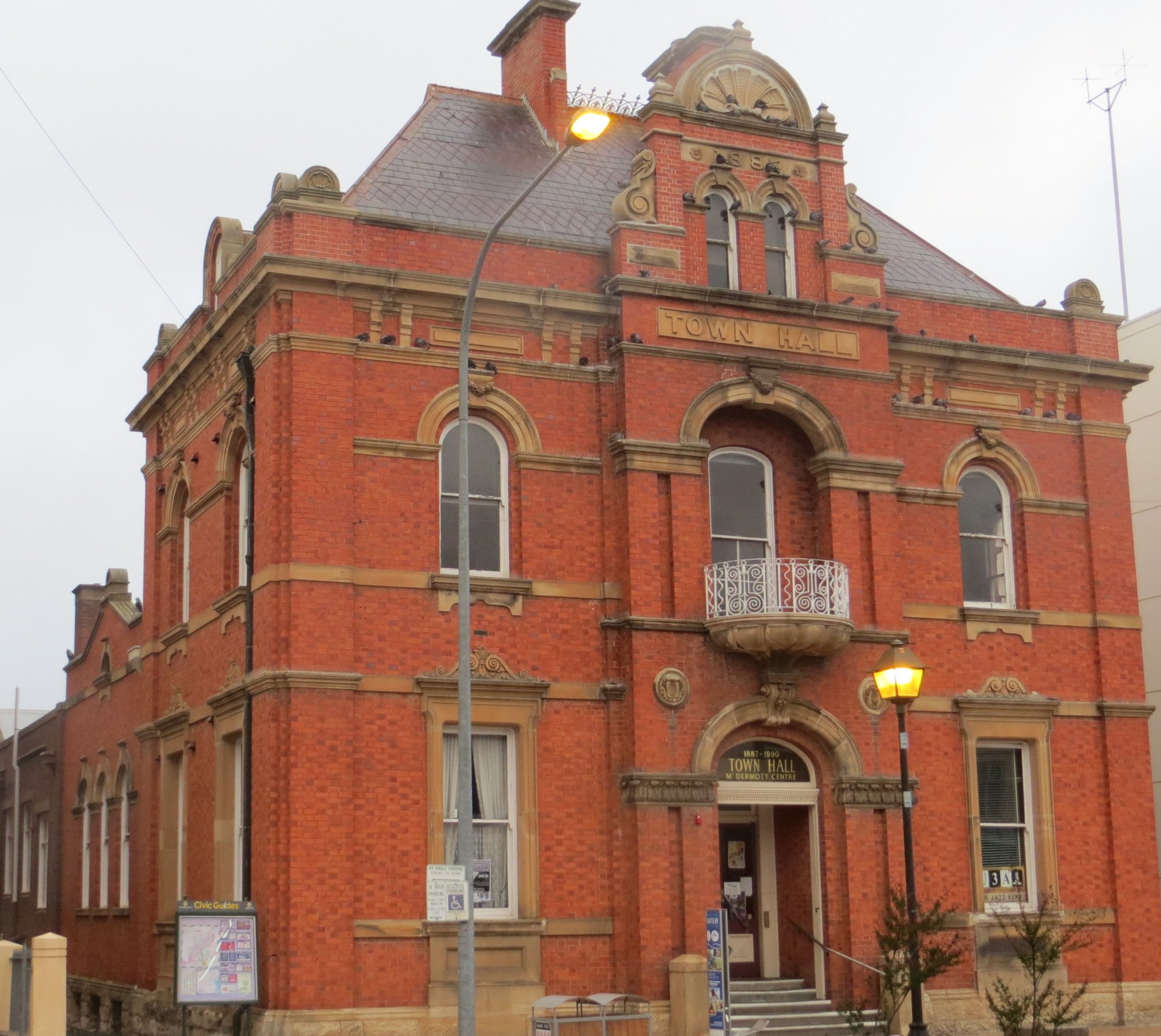 Breathless running up Collins Street, Melbourne, cursing and swearing for lingering over dinner too long and now late as blazes.

I had stepped off a plane earlier, hugged Rebecca and went to retrieve my bag while her head was buried in a furious text message, that ended with her beaming at me.

“I got tickets for Johnny Cash,” my daughter said to me.
“When?”
“Two hours time, lets have tea first.’’

It wasn’t the real Man in Black of course. Tex Perkins playing him, but we still ran full pelt and were the last ones through the Athenaeum Theatre doors. We bounded upstairs and… wow. The best seats in the house because of a last minute cancellation.

Months later were discovered Perkins was running as an independent candidate in the Victorian elections to save the Palais Theatre, once an iconic performance venue, standing in ruins.

Well, too bad Melbourne. We have a gorgeous old building in good shape in Goulburn, and a council willing to spend $10 million – yes $10 million – converting it into a 400-seat performing arts centre. People are going nuts. Petitioning against it. True story.

Of 19 submissions from the public on this proposal, eight are supportive and 11 raise concerns, mostly about a lack of parking, reinforced with 529 signatures. The Joint Regional Planning Panel is expected to complete the assessment in the next two months.

My fear is not about parking, it is this visionary project that promises more life in the old town hall, in the main street and reverberating far and beyond our city will be scrapped, as have previous plans for decades since the Lilac Time Hall became a picture theatre.

Parking objections are far from insurmountable. For many years Goulburn’s main street had two picture theatres, the Odeon (991 seats when it closed in 1966) and Hoyts Ritz (999 when it closed 1972) and it was television, not traffic that eroded their popularity. This of course was before the Hume Highway bypassed the main street.

Adele lifted the spirits of hundreds of thousands of Australians when she performed in Brisbane, Perth, Adelaide, Sydney and Melbourne and threatened traffic gridlock in most capitals. Yet her show went on, as it should have, because solutions were found and I’ll bet cash registers around those venues sang too. Hello.

Lieder Theatre artistic director Chrisjohn Hancock says he is conflicted by the complexity arising from a new theatre. In his opinion its success or failure will depend on its management. He remembers his predecessor at the Lieder John Spicer making an unsuccessful bid on the Lieder’s behalf for the former Hoyts picture theatre, now a Kentucky Fried Chicken outlet.

Built in 1929 the famous 150-seat Lieder needs major work, and serious funding. Mr Hancock says filling 400 seats in a new one will be a challenge. He says the proposed design is fantastic, potentially allowing a creative, exciting hub for different uses, including a community hall.

I despair when precious old buildings burn, or fall into into disrepair because they are under-used, or closed to consolidate hotel poker machine licenses at other venues. Young people in Goulburn are bombarded with betting and booze at every second corner of our shopping centre. They grow up in a dominant drinking and gambling culture.

Of more concern is research our region has the highest suicide rate across the Local Health District catchment, 30 percent higher than health district averages and 40 per cent higher than the NSW average.

Before the 346-seat Queanbeyan Performing Arts Centre opened in 2008 local butcher Peter Lindbeck thought it was wrong on many levels, including its location near the main street, swallowing too many parking spaces.

Nine years later Mr Lindbeck says The Q, as it is known as, is a gem in the middle of the city, giving everyone something different to look forward to. When a show is on, 70 per cent of the cars are from the ACT. The small businessman, who is on the board of The Q, says people see their home town in a new, positive light. “ You look around at all the eateries, it has taken them to a higher level,’’ he says.

Crookwell Amateur Dramatic Society has carried its community through the highs and lows of rural life. President Robert Bill, and his wife Sandra, say people walk away from productions excited and feeling good about themselves.

Word of mouth spreads like wildfire, people stop them in the street to say how much they enjoy shows.

She says parents seeing and hearing and responding to a small child with a soft voice on stage is crucial. “It builds their confidence and character.’’

She says children at past eisteddfods have sat on the floor of licensed clubs, watching performances.

Goulburn can do better. We can nourish and uplift our community through live entertainment by building a performing arts centre in the vibrant, beating heart of our city.

A passionate Blues fan Paul Murphy told a Goulburn Mulwaree Council meeting tonight (Tuesday) he had travelled from Victoria to Goulburn by train to plead for more funding for the annual Blues festival, which he reckons is on the cusp of emulating Tamworth country music and Parkes Elvis festival. I reckon if the shows are good enough, Canberrans will travel. They go to Sydney and Melbourne for entertainment. Why not Goulburn?

A train or bus trip could be tied in with performances? That would be much safer than driving an hour home late at night … and more fun than having to have a designated driver …

A passionate Blues fan Paul Murphy told a Goulburn Mulwaree Council meeting tonight (Tuesday) he had travelled from Victoria to Goulburn by train to plead for more funding for the annual Blues festival, which he reckons is on the cusp of emulating Tamworth country music and Parkes Elvis festival. I reckon if the shows are good enough, Canberrans will travel. They go to Sydney and Melbourne for entertainment. Why not Goulburn?

Not sure that it’s valid to compare the Q with a potential venue in Goulburn as an attraction for an ACT component of audiences. Queanbeyan is 15 minutes from Canberra, Goulburn nearly an hour …

Renee Osburne - 7 hours ago
It’s disgusting we pay rates and expensive ones at that, and the Government can’t even provide a basic service. Even the... View
Mateusz Jan - 9 hours ago
Anthony Nolan did you give the goats to the act government... View
Public Sector 41

kenbehrens - 8 hours ago
Pretty weird to assign tariffs around whether the house faces north, its size and whether the person is on welfare or not. Th... View
chewy14 - 10 hours ago
Retro, One of us in denial, that's for sure but it isn't me. You still think fossil fuels can compete with cheaper renewable... View
Capital Retro - 12 hours ago
You are still in denial that renewables are where they are solely because of massive subsidies. At the rate coal fired power... View
Community 5

Norm Cheeseman - 8 hours ago
My great grandfather Noah Cheeseman was the first owner, the pub was built by his father in law Jeremiah Barrett View
Cheryl Thuillier - 10 hours ago
Was a great place. View
Motoring 9