Graffiti watch – Something we could live without

As seen on various footpaths in the Inner North: 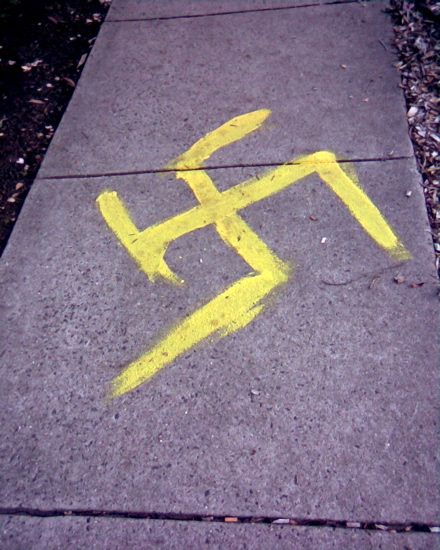 Interesting choice of colour, are they trying to be ironic? Also it appears to be painted rather than sprayed so my money’s on an old nutter rather than stupid kids.

I recommend an annual storm-drain decorating competition as part of the Celebrate Canberra festival.

You live and learn eh?

No offence but manga isn’t my usual source of accurate information.

That said, I’ve done a little research and yes, the above pictur is an example of the bad swastika, although historically both right and left facing had been used in different cultures.(oh and to show I wasn’t completely mistaken, apparently Nazi ensigns had through and through format, meaning that one side was right facing and the other was left facing.)

And I agree with Johnboy in that the person that painted this probably wasn’t fully aware of the nuances I have mentioned above.

However the ignorance of the average neo nazi makes it a dangerous thing to rely on.

Mutley, no. That is correct.

I have a little manga here called Blade of the Immortal that explains it all very nicely. The tines pointing the other way (counter-clockwise) represent the Japanese Buddhist version called the manji.

I think we can all agree that this particular piece of graffiti is proof that there is an underground society of neo-nazi molemen living in the storm water drains of Canberra. The question is: Do we impose a police state immediately, or do we only round up all the molemen first?

ORIGIN early 20th cent.: probably a blend of irrespective and regardless .

USAGE Irregardless, with its illogical negative prefix, is widely heard, perhaps arising under the influence of such perfectly correct forms as: irrespective. Irregardless is avoided by careful users of English. Use regardless to mean ‘without regard or consideration for’ or ‘nevertheless’: | I go walking every day regardless of season or weather.

aren’t the arms going the wrong way for a Swastika?

dont forget that the blokes who were referred to in bonfires(?) article were anti-nuclear protestors, not the spray paint carrying – baggy pant wearing variety.

Bonfire – I thought the Mac was the standard Australian Dictionary? Or do you prefer to recognise primacy of the Queen’s English.

Once again bonfire – if the owner of the property says it’s okay to paint there, it’s legal. It’s not your property so you don’t have to like it.

When goober in Melbourne broke into that train yard, he was doing it as a vandal. When he charges $800 for a graf piece, he’s an artist. Rather like you driving 150kmh at Oran park, versus doing the same on the Tuggeranong Parkway.

That said, I reckon the ACT government should make all storm water drains fair game for “urban artists” (subject to obscenity laws, naturally). I’d say it would cut down on tagging on private property and would pretty the place up a bit. I reckon it’d be cool to see a bit of “chalk artwork” (done in paints) next to a ludicrously colourful graf piece.

kiss my arse, irregardless of your googling.”

I find it incredible how quickly people revert to aggressive juvenile language here.And the word is erroneous, despite your oxford dictionarying.

What is also interesting is that the same arguments used in contravening property rights involved in trespass, an act which bonfire so loves, are similar to that put forward by graffiti artists.

the chalk thing is ok. i kind of like those.

especially those 3d ones

and yes, they are not permanent stains on private or public property.

lg its in the oxford english dictionary.

its a real word.

irregardless is not a word.
And this graffiti is f*(king disgusting.

how about ‘urban decorator’??

and what say those who oppose graffiti to those works done entirely in chalk – which washes off pretty easily..?

The fact of the matter is that Iâ€™ll never be either, cause I donâ€™t have an artistic bone in my bodyâ€¦

Graffiti by it’s very nature is illegal. If it’s done legally it is a ‘painting’. I’m guessing ‘urban painter’ doesn’t sound as fully sik as graffiti artist though.

In the right place some of this ‘art’ looks pretty good.

Sammie Davis - 7 minutes ago
Cameron Fischer 100% agree View
Paul Magarey - 4 hours ago
If they can pay tax, they should get to vote. No taxation without representation! View
Capital Retro - 4 hours ago
"Most of the boomers on FB have no clue how the world works." Typical of the contempt we receive from young people these days... View
Property 5

John Tozer - 10 minutes ago
Kevin Hingston - Happy to share the windfall profits from price rises too? No? Didn’t think so…! So why do they get to sh... View
Alex Kerr - 1 hour ago
Jack aye look at that View
Kevin Hingston - 1 hour ago
Shane Jasprizza it’s not just pure greed. The supply side cost has gone through the roof last two years. I’m told the inc... View
Sport 3

Michelle O'Donoghue Sweeny - 49 minutes ago
Nicole Thomas thanks 🙏 heaps didn’t see this ! View
Nicole Thomas - 1 hour ago
Michelle Bailey is in this article along with Zach. 👍 View
News 9

Paul Leins - 55 minutes ago
Typical of the Libs - sideline the elected representatives and put it in the hands of a bureaucrat. Any angle to try and unde... View
Lea Powell - 55 minutes ago
Brian McKenzie indeed but not on teacher conditions. Teaching is a nightmare unto itself in terms of hours of work done vs wh... View
Paul Leins - 59 minutes ago
Like a Liberal government ever increased a workforce? 😂 Federal aps staffing caps are gone and yet departments are still p... View
Breaking 2

I have a friend who is perpetually single. She lives overseas, and we catch up almost daily via voice notes...
*Results are based on activity within last 7 days

Is there a distinct cultural difference between Canberra’s north and south?

‘We’re all a geek for something’: get your inner nerd on with Canberra’s pop culture community

@the_riotact @The_RiotACT
Meet (or should that be meat?) Jamie Sangster of online meat #delivery and #education platform, Meating You https://t.co/CPNnnh7bUb (41 minutes ago)