Grass fire near Queanbeyan destroys up to 15 homes 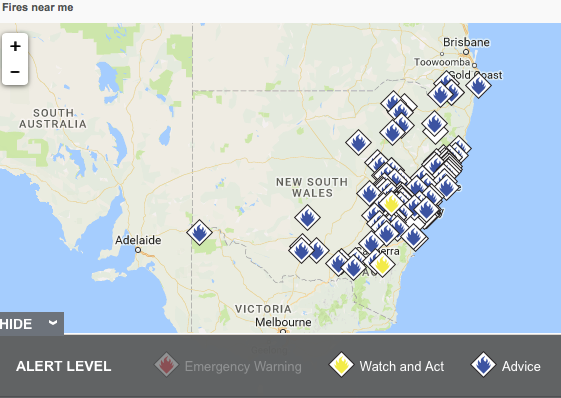 An out of control grass fire near Carwoola, approximately 10km east of Queanbeyan, is believed to have destroyed at least 15 homes today with that number expected to rise once conditions ease and the full extent of damage is clearer.

The fire was one of more than 100 burning across NSW late today as the combination of dry grass and leaves, high temperatures and strong winds created extreme fire danger conditions.

The Carwoola fire was moving in an easterly direction at 8pm and burning in the area of Captains Flat Road at Carwoola and Captains Flat.

One firefighter had been injured while fighting the blaze during the afternoon, but no other injuries had been reported by 8pm.

Crews were holding the fire to the west of the old railway line in the Hoskinstown area.

A number of properties have been destroyed by the fire. The exact number will not be known until conditions ease.

If you are in the area of Hoskinstown, Rossi or Forbes Creek, the Rural Fire Service advises you to seek shelter as it is too late to leave.

Protect yourself from the heat of the fire.

If you are in the area of Primrose Valley do not leave, as the road north is affected by fire.

If you are in the area of Captain’s Flat, there is no immediate threat to the township. Do not leave to the north, as the road is affected by fire.

Firefighters from NSW, the ACT and other states are working on the fire with the support of aircraft.

If your life is at risk, call Triple Zero (000) immediately.

Continue to stay up to date with the bush fire situation by checking http://www.rfs.nsw.gov.au, listening to your local radio station or by calling the NSW RFS Bush Fire Information Line on 1800 679 737.

If you live in the area but are away from home, it may not be safe to return to your property.

For information on road closures, check http://livetraffic.rta.nsw.gov.au. Roads may be closed without warning.

A total fire ban in the ACT and immediate NSW region remains in force until midnight tonight.

Pat Gagel - 6 hours ago
Maybe not. I have regularly used the service since 1992. Love it. Still the most sophisticated form of travel. Much better th... View
Marco Spaccavento - 6 hours ago
Pat Gagel I’m not a user. 3 a day also hardly justifies a new station… View
Pat Gagel - 7 hours ago
David Malcolm they aren’t a problem. Believe it or not, biggest issue is a grade crossing on a bend between Bungendore and... View
Property 22