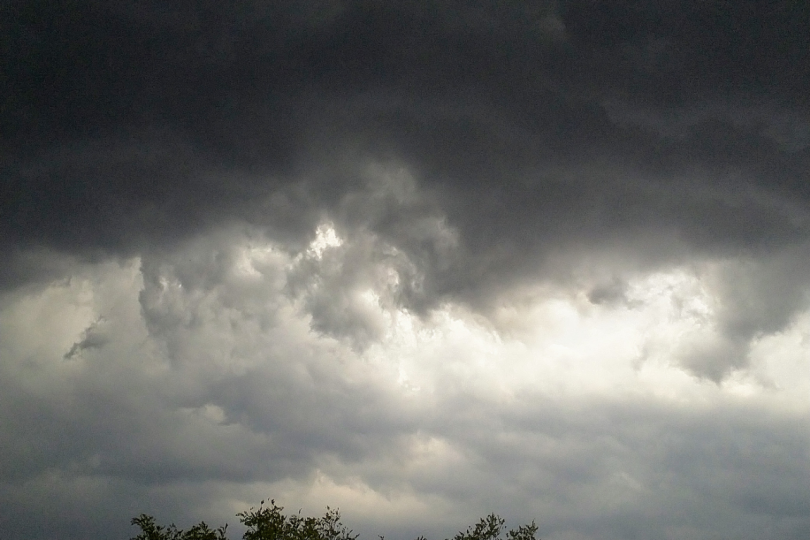 Expect to see plenty of skies like this over the entire region for the next seven days. Photo: Michael Weaver.

It’s great weather for soup as cooler temperatures and a slow-moving weather system are forecast to bring rain and cloudy skies to the region for the next seven days. We may even have to wait until the end of next week before we see a full day of sunshine.

In Canberra, the weather will be dominated by cloudy skies and a medium chance of rain, while on the South Coast, rain will be more persistent, with a high chance of rain from Thursday (18 March) through to at least Monday of next week.

The heaviest rainfall will be on Saturday and Sunday as a trough embedded in a high-pressure system deepens off the NSW coast, with strong south-easterly winds pushing the rainfall further inland towards Braidwood and the ACT.

A meteorologist with the Bureau of Meteorology, Jordan Notara, said persistent easterly winds will drive moisture from the coast, meaning there may be few sunny skies between now and at least Tuesday of next week.

“The wind direction is the main thing to look for. The wind will be coming from the east every single day for the next seven days,” Mr Notara told Region Media.

“Each day is likely to be a carbon copy of the one before as a weather pattern known as convergence sees wind from the coast causing increased levels of rain to move inland.

“The chance of seeing clear, sunny skies or even sunny breaks of any kind are probably unlikely over the next seven-day forecast.” 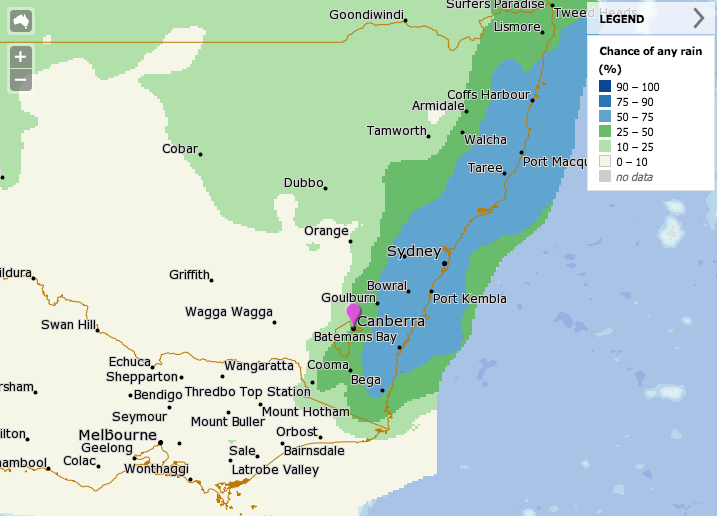 The forecast for rainfall in the NSW and ACT region on Saturday (20 March). Image: BOM.

Rainfall totals will vary across the region, but the heaviest falls will be along the coastline where between 50 and 75 mm of rain is forecast on Saturday (20 March). Falls of at least 10 to 25 mm are also expected between Thursday (18 March) and Tuesday of next week.

In the ACT and surrounding region, rainfall totals won’t be as high but will still be consistent.

Canberrans can expect to see a shower or two on Thursday (18 March) before rainfall totals steadily increase to between 5 and 20 mm on Saturday. There is also a high chance of rain on Sunday, Monday and Tuesday.

Temperatures of between 20 and 23 degrees Celsius are also forecast for the next seven days.

A hazardous surf warning has been issued for the coastline between Port Macquarie and Eden, with surf and swell conditions expected to be dangerous for coastal activities such as rock fishing, boating and swimming.

Mr Notara said he did not expect the Bureau would issue any other warnings, although there could be the chance of flash flooding in low-lying urban areas.

“It’s basically a story of increasing rainfall as we move into the weekend with the heaviest showers and the potential for some storms on Saturday.”

The forecast is for a high-pressure system to drift slowly east over the southern Tasman Sea for the next week. Two separate troughs will deepen over the northern inland and near the coast which are forecast to generate unsettled weather, with the potential for significant rain in some districts.

The BOM this week said the 2020–21 La Niña is nearing its end, with most oceanic indicators of the El Niño-Southern Oscillation (ENSO) now at neutral levels. However, many atmospheric indicators remain at La Niña levels, meaning La Niña’s influence is likely to persist into April, with outlooks indicating a wetter than average month for northern and eastern parts of Australia.

Much of the region has already seen its highest levels of rainfall since 2010-11.

Must be due to climate change……..

In katoomba it hasn’t stopped raining for weeks

John Maloney half your luck, we’ve had hardly any

it’s definitely better than the heat and fires last year.

John Maloney absolutely, at least it was a mild summer, I can’t complain about that.

I will believe it when I see it

Robert Gerhard, we hope that it isn’t as bad as what we have here at the moment. I think we have already had at least 100mls if not more, now they have added gale force winds to the mix. If it is, take care all of you please.

Annemarie Gerhard yeah I think you guys are copping it more then we are going to. From what I’ve seen on the synoptics it looks like the worst of it is going to still be a bit north of us. 🤞🏻

Robert Gerhard , it’s actually quite bad and today has been none stop. We are getting a lot of reports of flooding and of course the stupidity that goes with it. Supposed to be heading up north on Sunday for a week. Also would like to get down to the beach , we are supposed to have 4 more waves. The good thing is that it’s not really cold.

I told people in Cairns autumn is the best time to visit, I may have jinx it😂