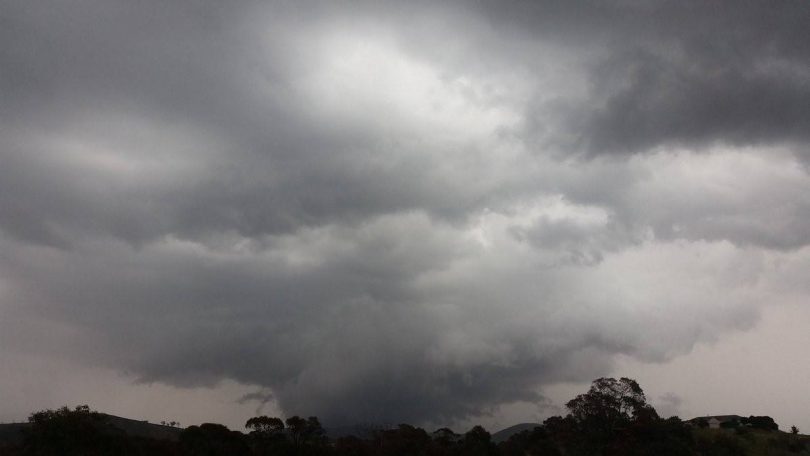 Widespread rain and storms are forecast across the ACT and NSW over the next few days. Photo: File.

Heavy rain forecast over the next couple of days will boost the ACT’s combined dam totals which now sit at just over half full.

It has already been a welcome moist start to autumn with Canberra Airport’s March total of 99.8 mm almost twice the ACT average of 50.7 mm, and about 34 mm more than last year.

Icon Water says on its website that dam levels are now at 50.58 per cent of capacity (277.80 GL), and will be topped-up with a forecast of up to 68 mm of rain over the next three days.

There is a 90 per cent chance of rain over the next two days. The biggest falls are expected tomorrow with 25 to 40 mm forecast, followed by 15-20 mm on Friday, and a few showers persisting on Saturday.

When that has passed, prepare for a taste of winter and a pre-Anzac Day flick of the heater switch with some chilly days and nights.

Duty Forecaster Helen Reid said a mixture of systems was creating unstable conditions that would produce widespread rain across the ACT and NSW.

She said a cold front was moving slowly across south-eastern Australia until a deep low helps it on its way over the weekend.

“Over the next couple of days, from tomorrow through to later on Saturday, we’re expecting fairly significant rainfall and thunderstorm activity through the region ahead of that cold air coming through,” she said.

”There is still a fair bit of moisture still in the atmosphere, and as it is moving slowly there is plenty of time for that rainfall to accumulate and hopefully add quite a bit extra into the dams.”

Apart from localised storm dumpings, the rain would be steady and widespread.

“There will be a sense of general rainfall and then a bit heavier and a bit rumblier at the same time,” Ms Reid said.

“There looks like there is enough rain for everyone to have a good garden watering.”

Severe thunderstorms could develop but any warnings would be issued on the day.

More stable conditions will take hold at the end of the weekend but, with clearer skies after the front passes through, temperatures will plunge.

The next few days will be cool at about 20 degrees Celsius, but a blanket of cloud will keep overnight temperatures warm until Sunday when the mercury will plunge.

Sunday is tipped to be a chilly 6 degrees overnight and only reach 14 degrees. While the days to follow will edge back to 18 or 19 degrees, the nights will stay cool, with a bracing low of 4 degrees to start the working week.

As Ms Reid said, it will be time to ”dig out the warmer clothing”, as well as fire up the heating.

Is anyone else enjoying this wet weather as much as I am.

Kaiyin Wu you ready for a taste of Canberra’s winter?

already ordered my beanie and scarf 🥶

Love the rain, shoulda been a frog!

Nice to get some more rain. We need a LOT more, though, to get the dams up.

Renee Thompson - 12 minutes ago
Should be entitled to both as I see it as one is purely for helping keep business a float hoping they survive the outcome and... View
News 15

Jak Kanard - 26 minutes ago
...it’s been the end of the line since it was first established ! Canberra has never been considered a rail destination - e... View
Property 3

Siân Victoria - 42 minutes ago
Brent Hunter I'd go further and say it's demonstrably true? 💁🏻‍♀️ View
Kristy Morton - 51 minutes ago
I can't choose as we have family history big time with Temora and Wagga . View
Kelly Maher - 51 minutes ago
Ashley Gleeson sure sure odd your not mentioned in the article View
Lifestyle 12

chewy14 - 51 minutes ago
JC, Thanks for pointing out that the ACT is not following the National Plan. And no the ACT "plan" is not nearly the same as... View
kenbehrens - 2 hours ago
Could it be that the ACT Government's Human Rights Charter prevents mandatory vaccinations? The Chief eluded to Human Rights... View
News 178

Chris Beath - 2 hours ago
Scott Neil haha want a lift? View
Scott Neil - 2 hours ago
Chris Beath you just want an excuse to regularly head up to the Panthers club for a spin on the brickies’ laptops View
show more show less
*Results are based on activity within last 7 days

@The_RiotACT @The_RiotACT
A Canberra healthcare worker who recently migrated from South Africa is concerned about her work prospects because she received the #Johnson & Johnson COVID-19 #vaccine which is not recognised in Australia https://t.co/rtBJhWL0es (1 hour ago)