Let us take your development
to the next level.
1 June 2022 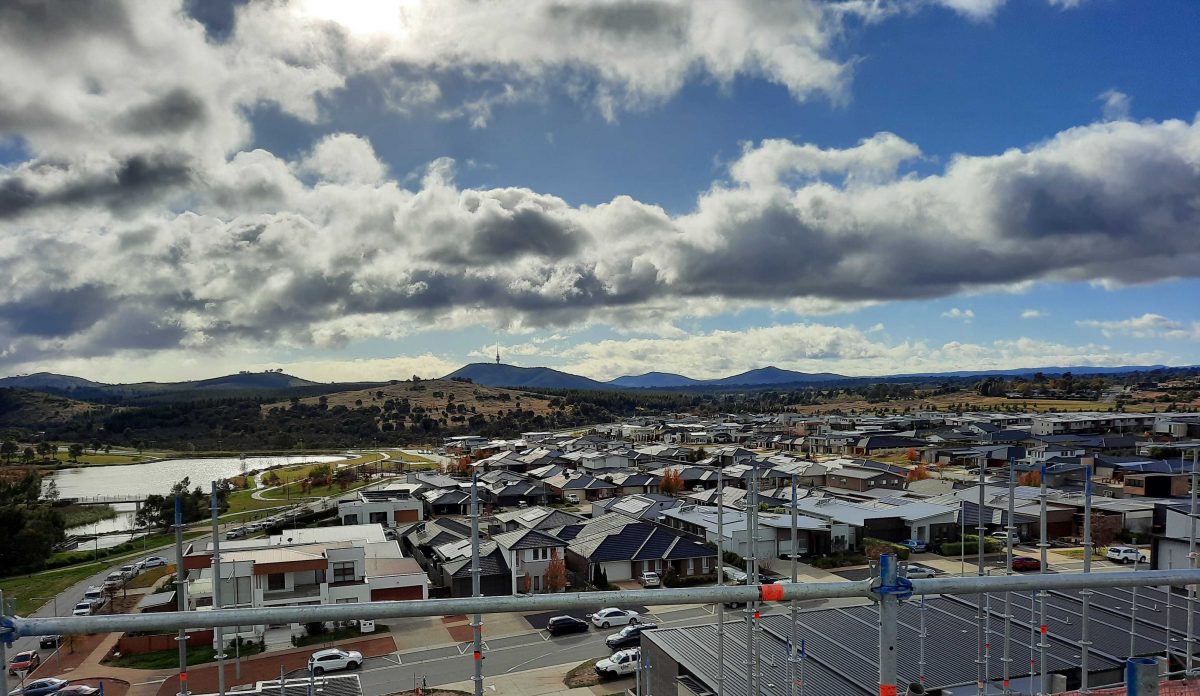 Housing in Coombs, one of the big movers in prices over the past 12 months. Photo: Ian Bushnell.

ACT house prices have done what they have threatened all year to do – gone into retreat after riding high for nearly three years.

CoreLogic’s latest data for May show overall residential property holding steady, edging down just 0.1 per cent, but stand-alone houses, after falls in some Canberra suburbs already this year, dipped 0.4 per cent.

It may provide some hope to potential buyers, but many have already switched to cheaper apartments and townhouses after hitting the price wall.

Subsequently, prices in the medium and high-density sectors rose in May by nearly a percentage point (0.9 per cent).

While Canberra now seems to have joined the rest of the country in being impacted by higher interest rates, stricter lending rules and affordability limits, it must be remembered that homeowners have enjoyed massive gains over the past couple of years and are still way ahead after house prices rose 18.7 per cent overall over the past 12 months.

So any falls, for now, are still marginal, and first-home buyers still face big borrowings to get into the market, especially for a house, a daunting prospect in a period when interest rates are set to rise further.

The median house price sits at well over a million dollars, and the median unit price continues to rise and is now more than $622,000.

So far this year, house prices are up 3.9 per cent and units and townhouses, the big movers, rose 6.1 per cent.

Weekend auction listings and results have fluctuated in recent weeks, ranging from as low as only 43 two weeks ago to 80 last weekend, interestingly, a long weekend.

But the clearance rate last weekend was just 63.4 per cent, with the median sale price slipping below the million dollar mark ($849,000), although the top 10 sales were still above $1 million.

Nonetheless, it suggests properties are taking longer to sell and sellers can’t expect to get the results of the past couple of years.

CoreLogic data also shows the Weston Creek-Molonglo region dominating its top 10 for price growth over the past 12 months with phenomenal results. 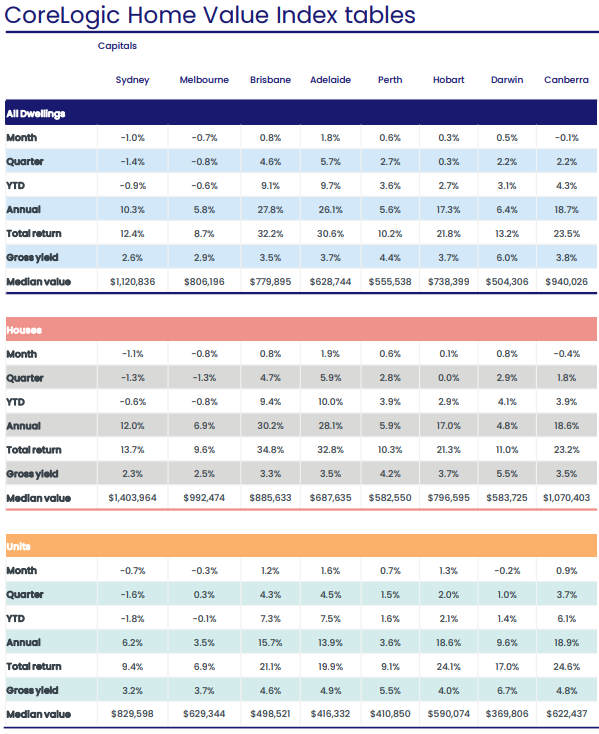 Nationally, the housing market just dipped into negative territory at 0.1 per cent, the first decline since September 2020.

CoreLogic’s research director Tim Lawless said rising interest rates had made an impact, but conditions had been weakening over the past year.

Mr Lawless noted the quarterly growth rate in national dwelling values peaked in May 2021, shortly after a peak in consumer sentiment and a trend towards higher fixed mortgage rates.

“Since then, housing has been getting more unaffordable, households have become increasingly sensitive to higher interest rates as debt levels increased, savings have reduced and lending conditions have tightened,” he said.

“Now we are also seeing high inflation and a higher cost of debt flowing through to less housing demand.”

But strong employment and potential wage increases were rays of hope as interest rates normalised.

Clarity Home Loans managing director Mark Edlund said that while the interest rate rise impacted demand, the election of a Labor Government and likely expansion of the public service and pay rises for public servants would probably mean ongoing stability for the Canberra market.

Mr Edlund said there had been a fall-off in web traffic since the rate rise, but the company was still getting a lot of inquiries.

Clarity had just experienced one of its biggest settlement months for off-the-plan sales as the construction phase ended, but demand for that product had been consistent over the past few years.

Mr Edlund said the feedback from house buyers was that it was easier to find a property and compete at an auction than six months ago.

“The competition isn’t there, plus there’s a little bit more stock on the market. There’s a closer alignment between expectation and reality,” he said.

Canberra $622K median for units ? That is crazy high! Never would have imagined that.

Double that if you want an independent living one.

Twenty years ago there was enough housing for the majority of Australians. What has changed since then? The problem is far too high rates of immigration (with an ever increasing demand for housing), and foreigners buying up Australian land and housing. Housing should be for Australian citizens as a priority. Foreigners should not be allowed to buy up housing and land here as it is exploiting Australian citizens and pushing more Australians into homelessness. Why is this allowed? Allowing rich people from overseas to buy their way here is pushing real Aussies out of a home. There is more than enough housing here for all Australian citizens if we get our priorities sorted out.

The main problem has clearly been successive government policy and taxation changes to preference investors over owner occupiers for the last 20 years.

It has lead to huge affordability issues in an unproductive area of the economy, when we should be prioritising investment elsewhere.

Foreign investment is a sideshow compared to the overall issue.

Yeah, not unlike the result from investors buying up housing to rent seek – you wouldn’t be one of them would you jorie1? That would be rather contradictory if you were front running bad policies for personal financial gain.

Unless the current labor greens local gov release more land. Owning a home will remain out of reach for many hard working Canberrans

Which, given the new prospects of remote working, makes me wonder how many will remain ‘Canberrans’ at this rate. Stay in Canberra with extreme cost of living, or take a $10k pay cut and move somewhere that saves you $15k a year on housing…

This is an issue that is seen all over the nation. I would suggest the issue is MORE than land release. Chewy hits the nail on the head in a reply above.

This reported home price fall will be temporary.

Since COVID, the costs of materials (if you can get them) to build a new house have risen 25% – 50%. This is why so many home building companies are going bust.

When people find out what today’s cost for their new build dream home is they will rush back to the established home market which will go to even higher levels.

Exactly, people whinging $600k is unaffordable when that is just the cost of building a house right now.

Which is why the government should reduce its unbalanced taxation and policy changes incentivising property investment speculators.

Then we can begin to rebalance our economy and investments to far more productive areas that will promote overall growth that benefits everyone.

Totally agree with that. (sorry if that puts the moccers on you, chewy)

@chewy how does reducing incentives to invest in property lower their cost to build? $600k in labour and material cost to build a new house is not going to change if you tax investment properties differently.

Sam Oak,
Can’t see where I suggested it would reduce the price to build.

I said it was another good reason to reduce investment incentives.

Because it would soften impact of increased material and Labour costs.

Sam, labour costs are dictated by demand. Raw material costs are also effected by demand too. So reduce demand you also reduce the costs.

Even if we saw a complete wipeout in home values here of 30% that would just be taking us back to pre Covid levels. With high demand, low supply, and relatively little speculation in the ACT markets all high interest rates will do is stall future growth. $million homes are the new norm. This inter generational wealth disparity will destroy the next generation unless either major party grow a spine on the matter, and remove negative gearing, and tax capital gains appropriately.

I’ll settle for one thing?