Opponents of the proposed private crematorium in Symonston say it will be the death knell of the adjacent Callum Brae Reserve and are lobbying MLAs to stop it.

International funeral services provider Invocare Australia and the Whitby Group lodged their joint venture for Block 1 Section 3 Symonston at the corner of Mugga Lane and Narrabundah Lane in October last year. They followed up with an amended development application (DA) in March. Comments closed on 31 May.

The proponents say the crematorium at Norwood Park in Mitchell and new public facility in Gungahlin are struggling to meet demand as Canberra’s population grows, particularly from the south.

But opponents say demand doesn’t exist with the 2020 National Crematorium Capacity Survey showing the ACT is operating at only 18 per cent capacity.

They say the facility – crematorium, a chapel and lounge, landscaping, a car park and associated works – is sited next to the boundary with Callum Brae, part of Canberra Nature Park, and threatens the pristine area, its animal and birdlife.

Opponents say it will also upset the peace and quiet of users who include those with mobility and mental health issues.

Frequent park user Pamela Collett has joined with birdwatching and community groups and other bushwalkers to fight the proposal.

She says the reserve and proposed nine-hectare crematorium site is currently home to mature Yellow Box and Blakely Red Gum trees, recently moved from the Endangered to Critically Endangered list, and grassy woodland.

“This is a very special place because these are the kinds of trees that are very old and create hollows,” Ms Collett says.

The proponents plan to remove at least 14 mature trees but the DA states the facilities have been positioned to avoid and minimise any direct and indirect impacts to heritage and biodiversity.

Ms Collett says there’s supposed to be a 150-metre buffer between the facility and the nature reserve but “it’s smack dab on the border, the north-west border of Callum Brae”.

She fears it will inevitably impact the nature reserve, disturb drainage and tree root systems, interfere with animal and bird corridors, and affect air quality.

Capital Ecology prepared an Ecological Impact Assessment as part of an Environment Protection and Biodiversity Conservation (EPBC) Act referral and an Environmental Significance Opinion (ESO) provided by the ACT Conservator of Flora and Fauna and ACT Heritage. This has now expired.

The DA consultation report states the proposal assessment will include a review by the conservator and potentially adjust elements of the design to minimise impacts. 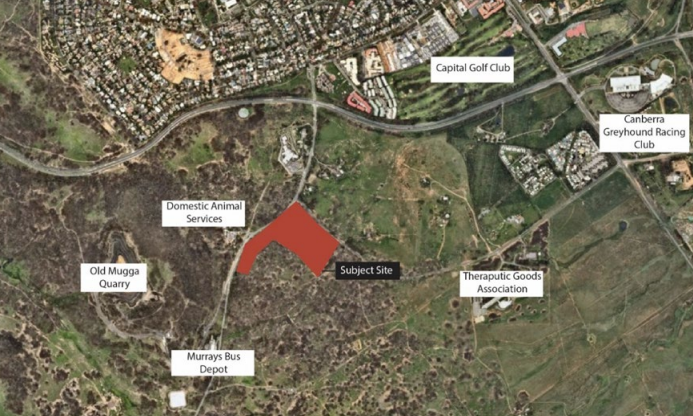 The site of the proposed crematorium in Symonston. Image: Purdon Planning.

Ms Collett says in light of the new listings for the trees and Gang-gang, the conservator might recommend the proposal be switched from the Merit track to the Impact track, which will require a full environmental impact statement.

She says her husband, who has Parkinson’s disease, and her son, who has mental health issues and lives in the nearby Narrabundah Longstay Caravan Park, benefit greatly from being in Callum Brae. And areas such as these will only become more important to the community.

“We have a great need for accessible areas,” Ms Collett says. “And that’s only growing … there’s going to be more and more demand on places where people can walk.”

ACT Greens MLA Jo Clay has agreed to sponsor an Assembly petition, citing environmental concerns and doubts about the need for another crematorium.

The ACT Greens note the ACT has gone from having one crematorium to three in a few years, with a fourth pending.

Ms Clay says the Greens want to know what Canberra’s demographic needs are for crematoriums and what the environmental impact will be of each proposal.

She says the planning system should be more strategic to ensure Canberrans get what they need, where they need it.

“I’m really happy to sponsor this petition and I particularly note the environmental concerns raised by the petitioners,” she says.

“This petition will be a great prompt to ensure the Assembly and the ACT Government carefully consider what Canberra needs and what environmental impact this development might have.”

I wonder why we need another crematorium if an existing one is only operating at 18% capacity? Also I understand that crematoriums are not the most sustainable way of dealing with the dead. The emissions are avoidable compared with low cost natural burials. Also, most importantly, our birds are rapidly declining in numbers, so we need to protect habitat as much as possible.
Good on you Pamela for standing up for our natural environment.

Just another opportunity for Canberrans to whinge

I was more concerned about the Crematorium, Graves and Funeral Centre being located next to the stinky rubbish tip, than the impact on the surrounding bush land.

Always seemed a weird location to go pay your respects to your loved ones.

On a less serious note. MacCarthur residents now won’t know if the smell is coming from the Tip or the Crematorium.

The public crematorium in Mugga Lane (opposite MLRMC) is still going ahead. There is no odour coming from the landfill (rubbish tip) at MLRMC but the “green” compost factory there delivers the smell of fermented vomit daily.

strange to see old rich white people not wanting things built near them. you would think this was in Ainslie of somewhere

As a professional conservationist and long term resident of the ACT, I am really quite concerned that, despite repeated affirmations to the contrary by our politicians, we are gradually losing our identity as the ‘Bush Capital’ and becoming the ‘Concrete Capital’.
Callum Brae is an important component of the Canberra Nature Park and every effort should be made to ensure that its ecological integrity is not compromised by any development for whatever purpose. We have precious few natural areas within Canberra and, as a nature loving society, we should ensure that the planning decisions of our bureaucrats and politicians reflect community views. I am sure that there are alternative sites for a fourth crematorium, if indeed an additional facility is really needed.

Honestly this site seems like a very sensible spot for a cermatiorium, does the community have an alternative proposal instead?