How can we get a fair go for our student asylum seekers? 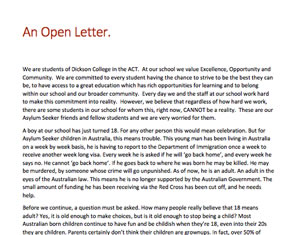 Dickson College students have published an open letter about one of their fellow students. The letter says that every week, when he applies to the Department of Immigration for a weekly visa extension, he has to explain that if he goes “back home” to where he was born he may be murdered by someone whose crime will go unpunished. His small amount of Red Cross funding has been cut off, and now that he has turned 18 he is no longer supported by the Australian Government. He is not eligible to receive the university education that many of his fellow students look forward to.

The biggest weekly decision for the average college student is whether or not to go to a party on the weekend, but for some of the teens in the college bridging program it is how to feed themselves, and how to stay out of a detention centre for another week.

Fellow Rioters, please read the Dickson College students’ letter and then post your suggestions on how we can persuade the Australian Government to give these kids a fair go.

7 Responses to How can we get a fair go for our student asylum seekers?
Filter
Showing only Website comments

I have heard elsewhere that there are problems for refugee students who turn 18 in the school year. I heard that many had to drop out of school, missing their HSC exams after studying most of the year for them. (I thought their school spot was no longer funded – perhaps they just have no money to live). Seems like this is an issue someone needs to look at.

Ah, the joy of youth. Naivety, idealism, righteous indignation and an unshakeable belief that you know everything. Maintain it as long as you can.

Its a pity things in the real world aren’t always black and white. It would be nice if they were. But they aren’t.

“When you’re 16 you think you can take on the world. And sometimes, you’re right!” – Bono.

Not that youth is always right (besides someone who followed through on that right there, and then some…!).

But without some high hopes, some youthful insight, we’d be stuck in some pretty ordinary blinkered sterile views. Possibly even deadly ones. At any rate I don’t see how age comes into this so directly.

This letter is so honest and to the point, maybe not the most brilliant piece of work you’ll ever see, but then again at least it is not high class deception!

If this young student wants to be the next Jacki Chan (the name Australians gave!), or the next mechanic, either will do… I don’t know, I mean, do you want to give Jacki a phone call? Sir, your youthful exhuberance and family input into our great city was really just a case of naive youthful exhuberance…

(I don’t think that’s what you’re saying as such, in your post, don’t get me wrong, just making the broader audience point now).

Maybe things aren’t always black and white, I’ll give a grain of something to it. But that’s as far as that goes and although I’ll grant it somewhat, I’ll also grant that it doesn’t wash the whole world into grey.

Especially not right here I mean this is Canberra, this is our guest for now, all other things being equal and fair then I think we should express some interest in this person who’s had the guts to write this letter.

“….murdered by someone whose crime will go unpunished……”
He is already in the right city that has plenty of those situations.

The school should focus on teaching those students better writing skills.

Ah, the joy of youth. Naivety, idealism, righteous indignation and an unshakeable belief that you know everything. Maintain it as long as you can.

Its a pity things in the real world aren’t always black and white. It would be nice if they were. But they aren’t.

I’d be interested in more detail about what sort of visa he has that has to apply weekly for extension. It would surprise me that Immigration could process such extension requests within a week, let alone every week.

“? If it meant you could survive, wouldn’t you take a boat out? And where would you run? An overpopulated and poor country where you have no hope of living outside of a camp? Or a land of opportunity? A land people say will give you a fair go? Where you may be able to live like a real human being?” [why the f is there a tabspace between every word in that letter]?

Question for those who (possibly correctly) insist there is no ‘queue’ as far as asylum seekers go, in the context of the above quote:

Why should an asylum seeker who has significant/enough resources available to them to take a boat journey to attempt to reach Australia, have greater access to Australia’s protection, than those who do not and are stuck in ‘an overpopulated and poor country where you have no hope of living outside of a camp’?

Have you ever considered that those people who consider boat arrivals to be ‘queue jumpers’, simply believe that greater (Australian) resources should be put into protecting those people who do not have the resources themselves to reach our country, or another place where they too could reach their potential much like the ‘boy’ referred to in the letter?

Whilst I might not agree with absolutely 100% of their thoughts – I applaud the student’s intent and it has certainly made me think about this particular scenario.

Given this is an open forum – is there anyone out there with knowledge of these scenarios when people in this situation transition from <18 to 18???

Matthew Soall - 1 hour ago
Maybe ANU should be more focused on teaching students then running the place like a business. View
Capital Retro - 2 hours ago
The alarm bells are ringing now: https://www.abc.net.au/news/2021-04-23/anu-unveils-162-million-budget-deficit-due-to-covid-1... View
David Hennessy - 3 hours ago
Can’t imagine this ending other than positive View
Opinion 63

Peter Brierley - 1 hour ago
If I have to follow ALL the rules to drive my car (on the road) then why are these SAME rules not applied to ALL other road u... View
nerdfrenzy - 2 hours ago
I use a scooter to commute to and from work everyday. I'm always aware of people sharing the bike paths that I use. I do find... View
Jaeme Ogilvie - 2 hours ago
Escooter owners are not a problem as rule, I think its super important they are not grouped in here. Unfortunately there seem... View
News 5

saphael7 - 2 hours ago
Does this mean that domestic violence is going to be brought to the park frequented by small children? View
Community 1

Esmeralda - 2 hours ago
You're asking the wrong questions. The idea that you have to take from the poor to give to the poor is outdated and just wron... View
Food & Wine 49

Naoko Lamb - 4 hours ago
Very tasty soup, noodle and chashu. The service was quick and friendly and the atmosphere of the shop was vibrant and welcomi... View
News 4

Brisal - 4 hours ago
Then you stop and fix it. It isn't difficult. View
News 15

Neville Mercer - 4 hours ago
Wasnt the Center cinema part of the Academy Twin Cinema group at Paddington? View
Shayne Borger - 14 hours ago
Jorge Gatica na just someone who doesnt appreciate architecture or heritage....probably a developer who like the council want... View
Lifestyle 28

Darron Marks - 6 hours ago
Yeah we are still waiting for the cinema in Gungahlin as well. Covid is the reason supposedly hasn't stopped construction on... View
News 26

chewy14 - 15 hours ago
Capital Retro, Except all evidence at present is to the contrary. The only large scale batteries connected to the grid are ma... View
Opinion 8

Brian Evans - 16 hours ago
I live in an Enrico house and it is, day to day a wonderful experience. View
show more show less
*Results are based on activity within last 7 days

@The_RiotACT @The_RiotACT
The final two stages of the transformational Founders Lane precinct opposite the Canberra Centre have topped out and are on the way to completion this year https://t.co/zQOMWRQ0q1 (10 minutes ago)

@The_RiotACT @The_RiotACT
The Gang Gang Café may be tucked away at #Downer shops, but its musician owners are making a splash https://t.co/RRXY5ACYgx (1 hour ago)

@The_RiotACT @The_RiotACT
Can you help police identify this man? He was taken to hospital by ambulance from the Gungahlin Town Centre on 30 March 2021 and says his name is 'Roger' https://t.co/eaRqBkQco8 (2 hours ago)