Saturday 22 November at Smiths Alternative, the Feldons will be releasing their third full length album Human Graffiti, 13 songs of original mod, powerpop with a touch of blues and punk. They will be supported by local favourites Raucous Fracas from 8.00pm. $10 door of which a percentage will be donated to Movember.

The Feldons have been described as “something very Ferry on the Mersey, or Beatlesque. Mention of Paul Weller (does) not quite nail the sound but there (is) an undertone of that British invasion rock and roll that was big in the sixties” and “entertaining, danceable, listenable as well as easy on the eye”. The SixtyOne.com commented, “have been waiting for this sound for a while now and the feldons deliver.”

BMA Magazine wrote of their last album, Goody Hallett and Other Stories that it is (a) “solid album with some definite single-worthy tracks”, and that it “wouldn’t have sounded out of place in a groovy record shop in swinging London.”

Triple J Unearthed commented that “There’s a definate[sic] 60s pop sensibility with the harmonised vocals coming in and out and the semi-psychedelic fadeout(s) at the end. The guitar hooks (are) very catchy indeed and complements the vocals perfectly” and “classic rock rhythm/beat that makes you move like a tool around your kitchen and sing into your cooking utensils”.

The Feldons have released two previous albums, A Cabinet of Human Oddities in 2008 and Goody Hallett and Other Stories in 2012 and are regulars on ABC666 morning and afternoon programs, as well as on 2XX Local n Live and Valley 89.5. 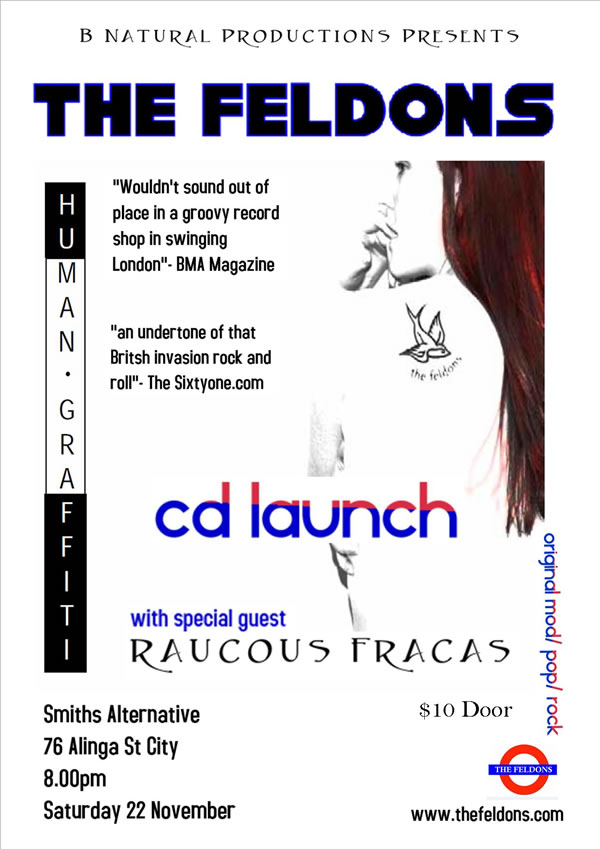 Now added to the bill, Fraudband from Melbourne.

Dolores Bicket - 4 hours ago
Where can we drop off the blue milk lids? View
ACT Election 110

Sarah Fox - 6 hours ago
Zalan Filip we will have to check it out! View
Zalan Filip - 16 hours ago
Sarah Fox the one Soph was going on about... reminds me a bit of the huge market thing in Castlemaine. View
Angela Doyle - 18 hours ago
Jacinta Elliott yes please! View
Opinion 108

Jose Black - 16 hours ago
The ACT Greens have a major policy on supporting the community sector (including youth and mental health services) and giving... View
Ghanaian Aussies - 22 hours ago
Tom Munro Bullying someone who identifies differently to them is what I am talking about. This is not a fair go for all. So i... View
catder - 1 day ago
Bethany Williams your post exposes you as a hypocrite that knows nothing. We know there are members of the Libs who are conse... View
Property 35

Dwy Jago - 21 hours ago
Now where do you look when your car is stolen? View
News 10

Bianca Rossetti - 23 hours ago
Sadly it to access the chronic pain clinic it is over a year wait!! View
News 7

ACT Policing is investigating an altercation between two groups in the early hours of Sunday morning (27 September) that resulted...
News 2

News that public servants will soon be returning to their offices will come as a huge relief to many businesses,...
Property 14

The elegant and luxurious residence at 515 Denley Drive has six bedrooms and three bathrooms, and was designed by the owner-builders,...
Opinion 107

@The_RiotACT @The_RiotACT
Big changes are in store for a key Woden corner with Zapari unveiling its plans for $400m mixed-use development https://t.co/nVKfiBzBed (4 hours ago)