Hume a microcosm of Federal election 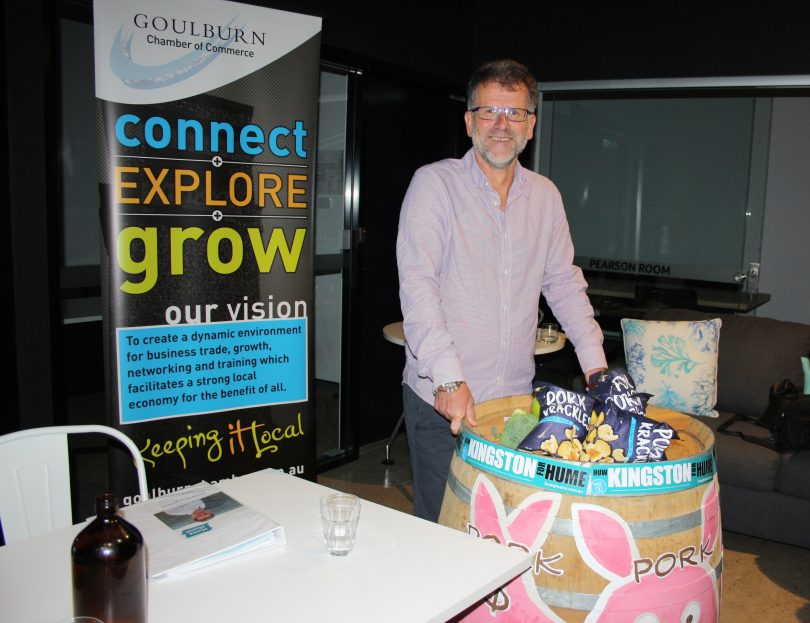 Pork barrelling… Independent candidate for Hume Huw Kingston with his barrel and pork crackling chips. In a parody of pre-election funding promises, as an Independent without access to government money, he regularly hands out the chips instead. Photos: Maryann Weston.

If you were looking for a microcosm of the Federal election, you might have found it in the Goulburn Meet the Candidates night last week. There were no shows from non-resident candidates, security patrols to keep out provocative media in front of Energy Minister Angus Taylor’s appearance, and impassioned climate change debate.

Goulburn is the epicenter of Hume, held by the Coalition with a decent margin of 10.2 per cent. However, changing demographics incorporate parts of Liverpool, Camden and Wollondilly LGA’s with their rapid population increases, through to heartland Coalition territory in Boorowa.

Minister Taylor has held Hume for six years. At the Goulburn Chamber of Commerce event, questions were not allowed from the floor much to the indignation of some (questions were required to be pre-submitted), and security managed entrance to the RSVP-only event.

Only three candidates showed: ALP candidate for Hume Aoife Champion, Independent Huw Kingston, and Minister Taylor. Fraser Anning’s Conservative National Party candidate Tanya Hargraves called in sick, David Powell from the Greens was an apology, and Ian Nebauer from the Christian Democratic Party actually lives in Tasmania. UAP’s Lynda Abdo lives in Queensland and was at the event in the audience but not on the panel, leaving before candidates spoke.

Controversy dogged the night from the start. Chamber of Commerce President Mark Bradbury was disappointed only three candidates managed to make the panel. Champion and Kingston didn’t receive pre-submitted questions until just before the event began, indicating they were at a disadvantage compared to the Minister with access to his professional staff.

“I love an open forum,” Independent candidate Huw Kingston said. “I received an email at 4:30 pm with the questions because some candidates asked what questions there were, and that’s school debating stuff. Angus’ team asked for the questions to be released [before the event] otherwise he wouldn’t turn up.”

The Chamber president denied this. “Candidates were advised of the format. It was the Chamber’s intention to keep candidates up to date and it was not the case that Angus threatened to pull out,” Mr Bradbury said.

ALP candidate Aoife Champion was similarly vocal about the late notification of questions. “I was at a funding announcement when the email came, and I didn’t get it. I don’t have any staff and I wasn’t aware it was there. Someone should have picked up the phone and suggested I read it.” 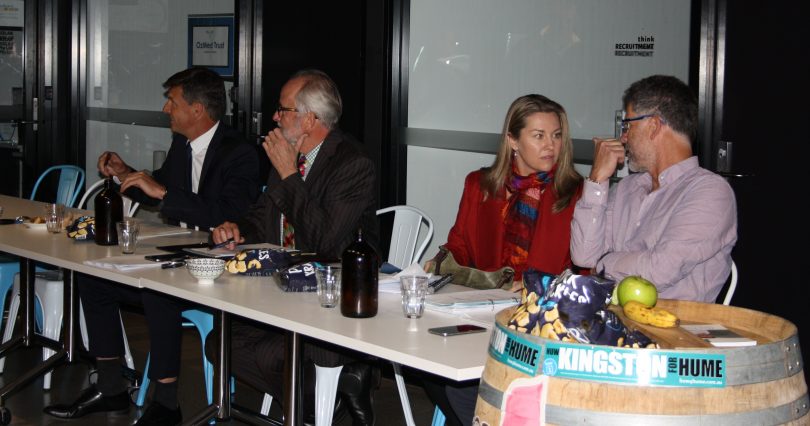 Mr Kingston is a small business owner and travel writer from Bundanoon, Ms Champion, a government lawyer from the Camden region, and Minister Taylor is the sitting member.

Mr Kingston made a strong case for small business. “They are the lifeblood of the economy.” However, his strongest advocacy was for climate change. “The impacts of the climate emergency hangs over everything in this election”, he said.

The ALP candidate, who achieved a 3.5 per cent swing in 2016, chose not to speak from a prepared speech. She discussed her background as a government lawyer including a stint working on immigration policy for the then Home Secretary and now current UK Prime Minister Theresa May while living in London. She believes the voting public are well informed in 2019.

“They are voting for their children’s future and the ALP has a vision for that future.” Education and jobs were a focus; and, on climate change, Ms Champion spoke of the mobilization of the residents to ‘do their own bit’, with governments needing to drive change forward.

Minister Taylor had the last word. He was proud to represent Hume and singled out small business as Hume’s big achievers. Focus was on what’s been achieved while he was the Member, including small business growth, low unemployment and government investment in the arts, mental health, and roads.

“The values of small business are the values of middle Australia. They are the engine room and should be given a fair go.” Minister Taylor referred back to his background in farming when answering a question on climate change plans.

“My family has been farming in the region for 200 years. I acknowledge climate change is happening and that humans have contributed to it,” he said. However, it was a global problem that needed global action and Australia was ‘doing its bit’ in meeting its obligations under the Paris Accord.

Angus 'Don't ask me anything about the Cayman Islands' Taylor.

So very True John having Questions Vetted it not on and having Police it very sad to have meeting with those restrictions.

Poor reflection on democracy. Rostrum, which once hosted these forums, has folded and boy, don’t we miss them.

George Watling - 25 minutes ago
Phil Ebbott it wont be closely regulated. the governments goal is to an infill free for all and it doesn't matter where is ha... View
George Watling - 37 minutes ago
These multi title trojan horses are cropping up all over Canberra. Developers are trying it on in Holder and Weston and other... View
News 45

Shane Westmore - 43 minutes ago
Absolutely. There’s people voting now who are completely misinformed about anything going on in this country & waste their... View
Nada Krstin - 3 hours ago
oops, meant to say, cannot have it one way! :)... View
Nada Krstin - 3 hours ago
No. And if you think they are mature enough to vote at 16 or 17, then they should be tried for any crimes as adults as well,... View
Opinion 94

markd1 - 7 hours ago
Large Eucalyptus trees maybe not, but about half of all Eucalypts are mallees--small trees, many of which are perfect for Can... View
Motoring 3

Capital Retro - 8 hours ago
I don't dispute that it would pull a trailer but based on the risk from the VW Jetta engine failures I wouldn't risk a $60,00... View
Community 4

Linda Stapleton - 8 hours ago
I was homeless once with two babies... oh I had the car, but it isnt the safest place to raise kids... thank goodness for wom... View
Community 2

Climate change worry not going away any time soon

@The_RiotACT @The_RiotACT
Canberra musician @lucysugerman deals with the messy, angry aftermath of a break-up on her latest single, 'golden boy' https://t.co/awfirYuNsw (4 hours ago)