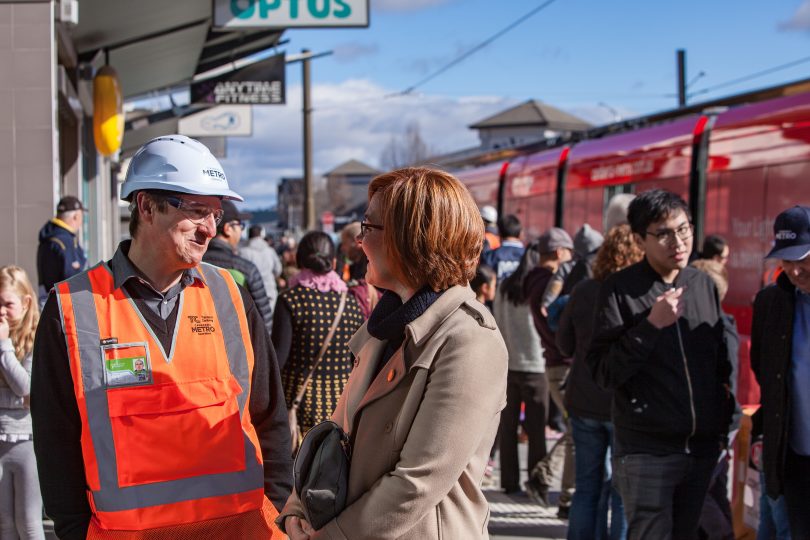 Hundreds of Canberrans flocked to the Gungahlin town centre on Sunday morning (12 August) to catch a glimpse of Canberra’s red new form of transport at the Light Rail Ready open day.

The event, which marked the start of the ACT’s first Rail Safety Week, gave locals the opportunity to see a light rail vehicle up close and participate in fun rail safety activities.

“This week is an opportunity to talk to Canberrans about how to stay safe around the rail,” she said. “Please obey all signs and road rules and also make sure you are paying attention around light rail vehicles because they are very quiet.” 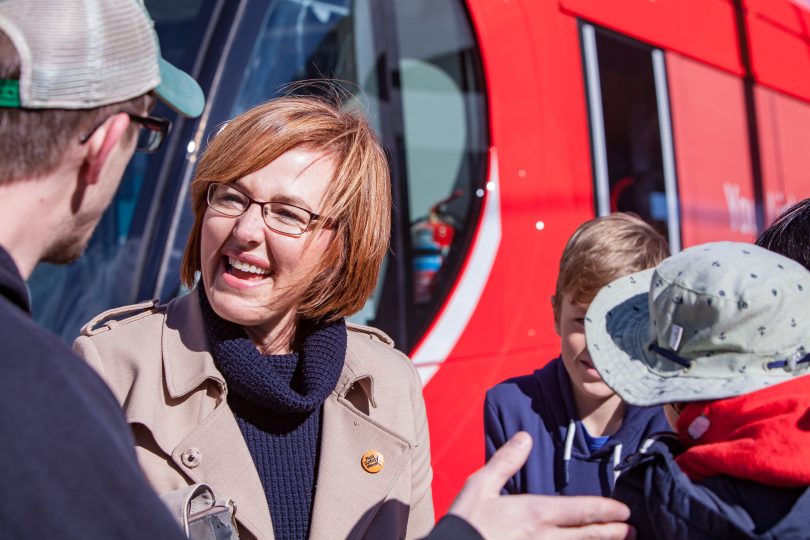 Ms Fitzharris chats to locals about track safety during the open day.

The light rail vehicles have been tested in the middle of the night since June but starting Monday (13 August), locals will be able to see the vehicles tested along the tracks for the first time ever during the day.

Ms Fitzharris said the start of daytime testing meant people needed to stay aware around the tracks, with the shiny red vehicles able to travel up to 70 kilometres per hour.

Canberra Metro chief executive Glenn Stockton said the chance for Canberrans to see the size of the vehicles during the open day reinforced the need to stay safe around the tracks.

“This week is a great opportunity to get a sense of the size and scale of the vehicles themselves and to start understanding the messages we are trying to put forward: how to stay safe around the vehicles and most importantly awareness,” he said. 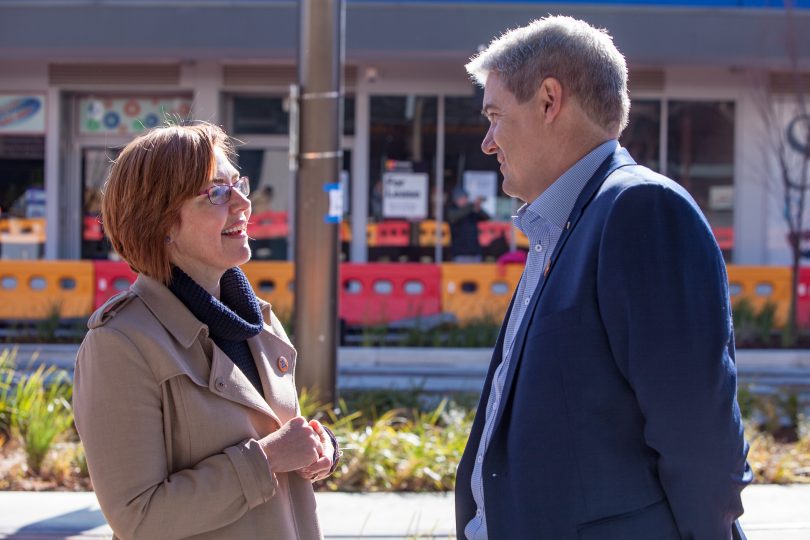 I think we should inaugurate the ‘Red Rail Muppet’ awards. Each month we award the biggest muppets for acts of stupidity in the categories of:
1) queuing across rail lines at intersections
2) truck drivers taking out overhead lines
3) red light runners being T-boned by big red tram
4) pedestrian smart phone droids oblivious to real world

All these reasons which are highly likely would have a huge impact on public transport. Good thing they are being managed by..

thank you ACT Govt for trying to educate me to be safe around big red moving vehicles. surely as a pedestrian I have right of way????

I’ll bet there were more people there than will actually use it on a daily basis outside of the hour and a half in the morning and afternoon.

Off peak it will just run backwards and forwards empty all day.

What a great investment!

Ever caught a 200 bus during the weekday? No? Didn’t think so.

They sound very dangerous, no wonder they are bright red.

Patrick Harrington - 5 hours ago
I'm sure the residents of Wright and Coombs will love a shopping centre in Whitlam. If Whitlam can actually get a shopping ce... View
Property 4

Christine Hamilton - 5 hours ago
Ash Claire common sense should tell you this is correct. View
Ash Claire - 13 hours ago
Yes, and I want to know where they get their stats from View
Food & Wine 22

Daniel Duncan - 6 hours ago
Clinton good luck with that. View
John Sykes - 8 hours ago
Peter Major that would be an interesting outcome. Diesel rebates to mining and agriculture allow them to function against int... View
Ray Whiteman - 11 hours ago
Hahaha! You think EVs are going to get a free ride? Wait until they are more popular, then the costs will hit owners View
Motoring 35

Carol Ranft - 6 hours ago
Michael Grinceri It would help if they advertised why a speed limit was chosen View
Ursula Gamal - 7 hours ago
👏👏👏👏👏👏finally!!!!!! View
Community 33

Stephen Esdaile - 8 hours ago
And how hard is it to cross the border to get a new set of shoes on the car? At least the fuel tax works because there's no p... View
Julie Macklin - 9 hours ago
Km per year should differentiate between (congested) city with alternative ways to travel, and (not congested) country, often... View
News 1

bikhet - 11 hours ago
Road usage charges have been discussed among economists for several years now as a form of taxation to replace fuel excise. O... View
Breaking 1

JC - 11 hours ago
Not that I care who the liberal senate candidate is I can see why many are so annoyed. The way in which old Zed was originall... View
News 5

Martin Budden - 11 hours ago
The government has been very clear: CRS are welcome to do it in Hume, but not in Fyshwick. CRS just needs to switch to Hume. View
News 16

Glen Sturesteps - 12 hours ago
Further proof of me being right, not that we needed it 😬 View
Hayley Marie - 12 hours ago
Kooms Sam I have a keen interest in native flora. I even drink a gin called “the botanist”, which is telling... View
Anna Louise - 13 hours ago
Glen Sturesteps looks like you were right 🤷‍♀️ View
Lifestyle 23

yoyoyo - 12 hours ago
They do bulk orders i.e. 100 apartments at a time. Good luck getting a price out of them. View
show more show less
*Results are based on activity within last 7 days

@The_RiotACT @The_RiotACT
Handmade Canberra partners with GIVIT to make it easy to brighten up Christmas for bushfire-affected communities https://t.co/sDzQvLLrus (6 hours ago)

@The_RiotACT @The_RiotACT
Looking for an exercise buddy? Meet Cookie, an active pooch who is at @rspcaact hoping to find a new owner https://t.co/0AeZxL5DVO (7 hours ago)