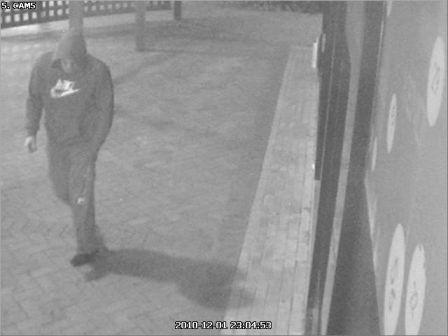 This in from Crime Stoppers:

ACT Policing has released a CCTV image of an alleged offender from an aggravated robbery at the Hawker shops last week, (Wednesday December 1).

The CCTV clearly shows one of the offender’s distinctive gait in which he appears to have a partial disability to his left leg. Police believe this may help to identify the offender.

About 11.10pm, a 36-year-old man was leaving the Rocksalt restaurant when he was approached by three unknown men. One of the men was armed with a baseball bat and another with a firearm.

The three male offenders forced the man back in the restaurant, and demanded he open the safe. He complied with their demands, and handed over a sum of cash to the offenders.

The male offenders were last seen leaving the location on foot in the direction of Belconnen Way.

The male victim did not sustain any injuries during the robbery.

The three male offenders are described as Caucasian, aged between 16-19 years old, with slim builds. They were wearing dark coloured clothing, hooded jumpers and bandannas covering the lower half of their faces.

Anyone who was in the area of the Hawker shops around the time of the incident or who may be able to identify the person in the image are asked to contact Crime Stoppers on 1800 333 000, or via the Crime Stoppers website on www.act.crimestoppers.com.au. Information can be provided anonymously.

If it looks natural enough, using a limp is a really effective misdirection tool to escape accurate public descriptions. Considering his face is mostly unrecognisable in the pic, it’s probably effective on CCTV in this case too.

Maybe Kevin Spacey could get away with doing this (faking a limp), but this guy? Not so sure. Looks like he’s using most of his brain power just to stand upright. But if he does have a real limp let’s hope it’s nothing trivial (sorry, feeling nasty this morning).

If it looks natural enough, using a limp is a really effective misdirection tool to escape accurate public descriptions. Considering his face is mostly unrecognisable in the pic, it’s probably effective on CCTV in this case too.

Michael Hill - 59 minutes ago
Great in hero green too…. View
Paul Leins - 16 hours ago
Chinmoy Misra so you're saying *you* can't maintain a reasonable speed in built up areas without some kind of ridiculous urba... View
News 15

chewy14 - 1 hour ago
JWinston, Climate change is most definitely real, although Flannery isn't really a figurehead or anyone that represents a pos... View
retep - 15 hours ago
*sourced. Geez it's a rough day.... View
retep - 15 hours ago
Applause. Thanks for your efforts. We too try to alleviate our energy use in similar ways. Also agree with your observations... View
Sport 13

Ramon Montero - 2 hours ago
I do remember him when started arbitrate football, indeed very polite and educated a young person. I had the privilege to mee... View
Kacey Butterworth - 13 hours ago
I feel extremely privileged to have had Ben as a mentor, teacher and year co-ordinator throughout my high school years. He ta... View
Public Sector 3

Ol L - 2 hours ago
If it’s not a museum then why have so many artefacts on display? Surely a very somber and minimal display of artefacts woul... View
Kerry Apted - 13 hours ago
Tiger Fit it's irrelevant what you see it as unfortunately. They're not "trying to turn it into a museum", it's already a mus... View
Tiger Fit - 13 hours ago
Kerry Apted that's not how I see it View
Opinion 1

Ol L - 2 hours ago
Odjers lane used to be no more than a late night toilet. Any improvement on that is good step View
Community 5

GRAPHIC CONTENT: Some readers may find this court report highly disturbing. A Canberra man has been found guilty of repeatedly...
Food & Wine 22

It's higher off the ground than any of its rivals. It has an all-wheel-drive system and driving modes for deep...
News 26