Illegal tobacco crop near Goulburn to go up in smoke 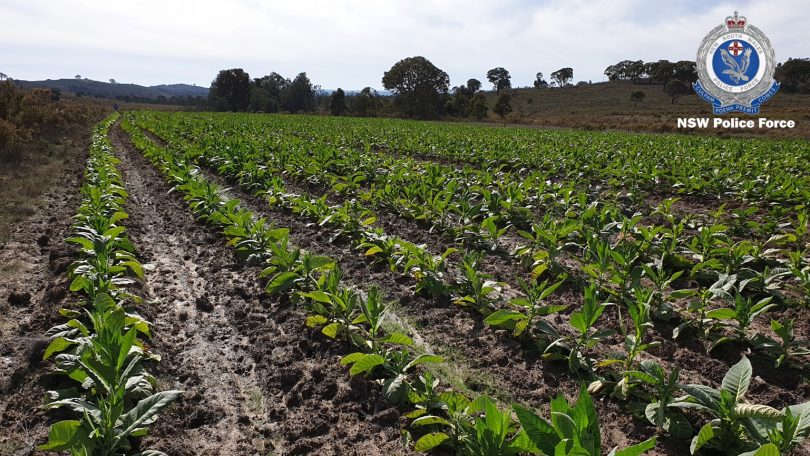 Police from the Hume Police District and the Rural Crime Prevention Team have seized more than 97 tonnes of tobacco from a property near Goulburn.

Earlier this month, police received information that a large illegal tobacco crop was being maintained on a rural property in Bevendale, about 80km north-west of Goulburn.

Investigators from The Hume Police District and the Rural Crime Prevention Team attended the property early yesterday morning (7 May) and found 8.6 acres worth of tobacco growing on the property.

A search warrant was executed, with police seizing a number of items for forensic examination.

Arrangements have since been made to destroy the crop, estimated to be around 97 tonnes.

Aerial shot of the tobacco plantation estimated to be worth approximately $4.9 million. Photo: NSW Police.

“Although tobacco may not be an illicit substance, the unpaid excise on this particular crop is estimated to be around $16 million dollars,” Detective Acting Inspector Price said.

“I would like to thank those members of the community who came forward and provided us with valuable information.

“As this investigation continues, we are appealing for anyone else in the community with information to come forward.”

The estimated street value of the product is approximately $4.9 million.

As inquiries continue, anyone with information is urged to contact Crime Stoppers on 1800 333 000.

Government only cares because they’re not receiving tax on this. If people want to smoke then let them. This is just ruining someone’s livelihood, wasting good crop and proving how greedy the government is. We should be encouraging business and progress rather than stifling it. Multi-million dollar industries which help the economy wouldn’t exist if they had to pay tax. Need I say more? Now remind me what purpose the government serves.

@the_riotact @The_RiotACT
Ghanaian born and Canberra bred singer @genesisowusu has had a massive past week, claiming two Triple J awards and then scooping four ARIA awards on Wednesday night, including Album of the Year https://t.co/kjMabj6smr (20 minutes ago)