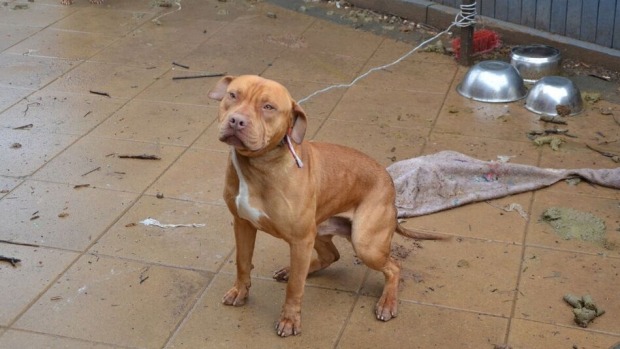 An Isabella Plains man has received a suspended one-month prison sentence and been banned from owning animals for 10 years after pleading guilty to abusing and failing to provide shelter for two dogs.

The man was sentenced in the ACT Magistrates Court to a 12-month good behaviour bond for not providing adequate shelter, and a one month suspended sentence on the cruelty charge, in addition to his decade-long animal ownership ban.

RSPCA ACT Inspectors attended a house in Isabella Plains after a complaint relating to the condition of the two dogs.

Inspectors spoke with a member of the public who said they had witnessed the man punching and hitting the dogs with the hard end of a broom. The individual also said the dogs had been tied to the clothesline for the past 6-12 months.

While at the scene, inspectors sighted the accused man on three occasions in the backyard holding a broom.

As he moved towards Honey and Hank, the dogs began to cower and move away.

Inspectors spoke with him regarding the complaint. When asked how many times he had hit the dog, he said: “About three or four times to quieten them down.”

A decision was made by inspectors to seize Honey and Hank.

A veterinary report showed Honey was thin, had calluses on her legs and a graze on her right paw. Honey’s eyes were also irritated and red.

Hank was seen to have raw open sores on his ears, abrasions over his belly and his scrotum was chapped, grazed with flaky scabbing. The tip of his tail had lost a great deal of hair due to vigorous wagging against a hard object. His collar was dirty and extremely tight causing a rash.

Senior Inspector Catherine Croatto, who attended the Isabella Plains house, said: “Abuse cases are often harder to prove because you usually need eyewitnesses that are brave enough to do something.

“It’s hard to know all that they have been through, but the obvious fear in their eyes and body language when the owner approached with an object in his hand said more than enough.”

Hank and Honey have since found new homes through RSPCA ACT.

Words fail me. This bloke couldn’t even spring for a decent chain for his dogs.

How is it that you need to do a training course before you can operate a stop / go lollipop, but anyone can just go out and buy a dog?

HiddenDragon - 7 hours ago
Some cautionary words here about the limits of battery technology - https://www.abc.net.au/news/2021-02-16/bill-gates-zero-em... View
dulynoted - 10 hours ago
those statistics might be outdated; renewables are getting cheaper and more energy efficient every year as technology improve... View
Capital Retro - 11 hours ago
In which way isn't nuclear power profitable? It depends on which experts you are talking too: https://www.ceda.com.au/NewsAnd... View
Sport 2