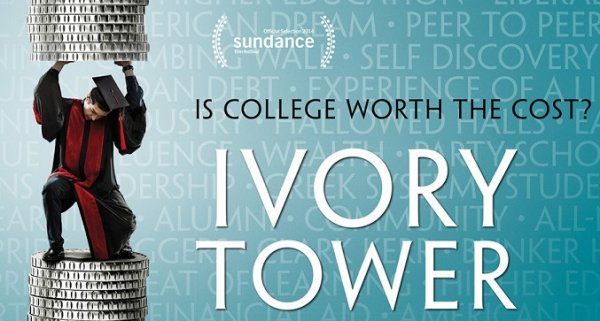 With deregulation of uni fees going before the Senate soon this is the ideal time for a conversation about what we want higher education in this country to be. The Canberra International Film Festival is contributing to this public debate with the documentary Ivory Tower, about the experience of the United States with a competitive for-profit university system. Government funding has been falling, tuition fees have been skyrocketing and universities are moving towards a premium model where they try to attract full-fee students with amenities like rock-climbing walls – while failure rates keep rising. When universities are run like a business bringing in money matters more than anything as old-fashioned as academic standards.

In the United States prestige is everything. Universities fight each other for a high ranking (which can justify higher tuition fees), and to do that they have to keep growing. The documentary takes us into Harvard, an elite school in every respect – prestigious, expensive, and academically rigorous. Harvard actually comes off quite well in this documentary as they still have a strong focus on teaching and face-to-face interaction rather than trying to find sneaky ways to cut costs. When they offer a course online it’s in addition to the teaching they provide their students, not a substitute.

But Harvard and schools like it are the winners in the US system, premium schools that provide a premium residential service – the luxury hotels of education. As state funding drops, less privileged schools are asking more in tuition from students for less actual teaching. Even in Australia we are already starting to see this: often online teaching has not been a supplement to education but a way of cutting costs. At a Q&A session after the film screening, festival director Lex Lindsay described this as “paying the same price but getting youtube.”

Of course, the situation in Australia isn’t as bad as the one in the United States. We at least have a HECS system where students can pay off their debt when they are able to afford it. The United States has a student loan system that was never intended to operate on the scale it currently does (in the US student debt has passed $1 trillion). Interest can be crippling, especially for students who can’t immediately find work. But even if our system is more humane than the one in the United States, we are still saddling people starting off in life with debt that some of them never actually be able to pay off.

It all comes back to the idea of education as a public good: all of society benefits from making education available to everyone rather than the perogative of a social and financial elite. Instead education is following a consumer model where universities try to tout their wares to full fee students. This pushes up the cost of education which in turn means higher fees for all students. Education becomes less about merit and social justice and more about taking anyone who is willing to pay – or at least willing to get into debt.

After the documentary there was a panel discussion with a professor from the ANU (Jeffrey Karp) and student representives from the ANU and UC. Or at least there would have been if the students had actually shown up: for unknown reasons the student representatives cancelled and did not provide us with any substitutes Given the importance of the issues being discussed I have no idea why they decided to sit this one out – especially when the documentary being screened was so strongly against fee deregulation.

Fortunately Professor Karp was eminently reasonable and more than capable of representing all sides of the debate. He stressed that education is expensive and that the cost has to be paid by someone. He also broadened the discussion by talking about the experience of students in the UK and in Califorina when he was working there (when tuition was much cheaper than it is now). But the best points came from an impassioned audience. One mother in the audience observed that not all degrees are supposed to bring in the big bucks: society still needs teachers and nurses and they are precisely the people who who will be asked to pay more under deregulation. As tuition fees rise students are encouraged to enter potentially money-making professions – rather than those that are merely vital to society. But even doing the “right” course is no guarantee of the job. Another audience member discussed a friend’s struggle to find work after completing a business degree and how his qualification did not give him the experience he needed to find a job. Universities have always put an emphasis on the importance of learning for its own sake, but as costs mount so does the demand from students that they receive something tangible for their investment, a change that is perhaps both good and bad.

If there’s one message from Ivory Tower, it’s that things could be worse – in Australia at least the idea of education as a public good isn’t quite dead yet. There’s a case that students should make some kind of contribution to the cost of their own education. After all, it’s hard to value something you get for free. But change is coming to the way higher education is managed, and it’s important for all Australians to be aware of the issues here – we have to decide what kind of education system we want our children to have. By screening Ivory Tower, the Canberra International Film Festival has done its part to stir discussion and spark debate.

….”There’s a case that students should make some kind of contribution to the cost of their own education”

Of course there is, and I have no problem with the HECS system. When or if the student receives the benefit of his/her tertiary education (in the form of a good salary), it is entirely fair that they be asked to repay some of the cost back to society.

I do have a problem with the quality of some tertiary qualifications though. Many graduates lack real-world experience and significant training is required before they can usefully contribute. I’m not sure what the solution might be for this – in many cases their lecturers seem to lack recent real-world experience themselves.

Perhaps more students souled ‘intern’ at real jobs as part of their course.

Stuart Ribot - 17 minutes ago
Ray Payne needs history lessons🤣 View
ghutch - 8 hours ago
A lot of good comments. Why don't we celebrate Oz Day on 1 Jan. Yeah I know you all still asleep from new year eve. But is th... View
Jenny McInnes - 9 hours ago
David Johnson it most likely was a public holiday there then View
Lifestyle 1

Colette Robinson - 3 hours ago
Adrian Fui Fui Moy but the path *is* being used for racing. Pedestrians and slower cyclists in either direction are merely ob... View
dolphin - 5 hours ago
despite your name you are neither rational or a very good observer. View
Dani Glatz - 7 hours ago
The simple answer Mark is there is no such thing as a cycle path in Canberra. Only Shared Paths. Would you choose a road with... View
Property 8

Dee Manders - 3 hours ago
I'd love it. View
Melissa Pearce - 4 hours ago
Maryanne Gates, can you and Nigel buy this place so I can visit cos I don’t have the time to sell my place and move! View
Bec Soric - 4 hours ago
Dee for when you win the lotto? View
News 18

Peter Curtis - 6 hours ago
Not to sure what a "Canberra mentality" would be but as long as we surrender the principle of solidarity for the belief that... View
Food & Wine 1

Jackie White - 10 hours ago
Thank you. I never walk around the lake with headphones precisely because of the risk of collision with a cyclist View
James Messervy - 10 hours ago
Jackie White no, I always ring my bell or call out.... View
Community 7

Susanne Jennings - 10 hours ago
Great to see it so successful- well done! View
show more show less
*Results are based on activity within last 7 days