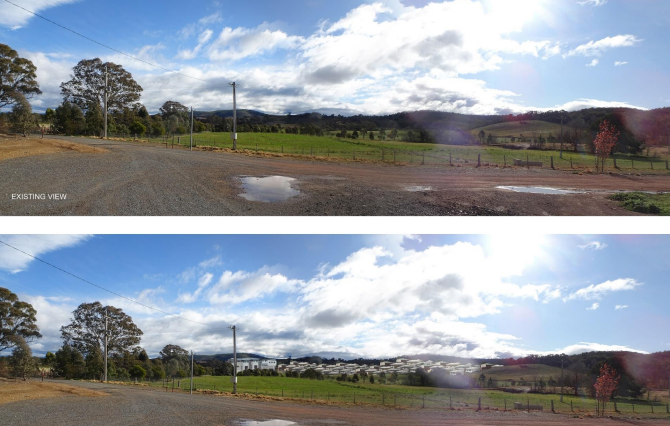 These now-and-after photos produced in the heritage report show the impact of the Jacka development on Elm Grove’s views. Photos: Eric Martin.

The impact of the proposed Jacka suburban development on the setting of the heritage-listed Elm Grove in Gungahlin will be catastrophic, according to a consultant’s report prepared for the rural property’s owner.

Eric Martin’s heritage report contains now-and-after photographs depicting the changed landscape around Elm Grove, showing two to three storey buildings on rising land and their impact on the existing viewsheds, which need to be included in any heritage assessment.

It also identifies the natural heritage values of woodlands in leased land currently being used by Mr Carmody as part of his farming operation.

The report says the current development application fails to adequately address known and detailed heritage issues that will be dramatically affected by the proposed estate development plan for Jacka Stage 1 and also future stages 2 and 3.

The DA also fails to address the requirements of the ACT Heritage Act, it says. 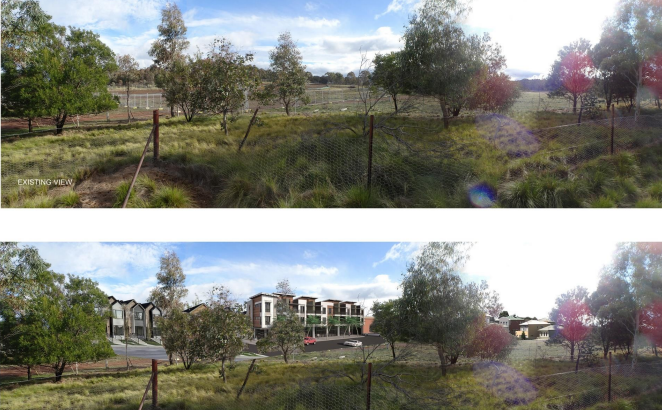 Mr Martin concludes that the DA should be withdrawn and a new Jacka masterplan be developed that accurately defines and protects the setting of Elm Grove; protects the natural and woodland features of the area; and retains a larger rural buffer area on the south boundary of Elm Grove (Jacka 2 Stage 3) before planned playing fields commence.

The masterplan would need wide exposure so heritage issues are dealt with before a new Estate Development Plan is prepared.

Mr Martin says that although the DA is for Stage 1 only, the impact of the whole of Jacka 2 needs to be considered as it is an integrated estate development plan.

READ ALSO: Elm Grove leaseholder digs in for another historic battle with government over housing plans

Past Traces found that despite the two reports cited in the DA, insufficient work had been done to clarify Aboriginal heritage issues and that local Aboriginal groups had not been consulted.

The DA states that the proposal complies with the mitigation measures recommended in a heritage statement endorsed by the Heritage Council, but the report says no Statement of Heritage Effects has been completed for Jacka 2.

It also urges further consultation to document any intangible (landscape, cultural and spiritual) heritage values of the broader area surrounding Elm Grove, as the potential for harm is present.

”Until this additional work is completed, the full extent of impacts on the indigenous cultural heritage values cannot be stated,” its says. 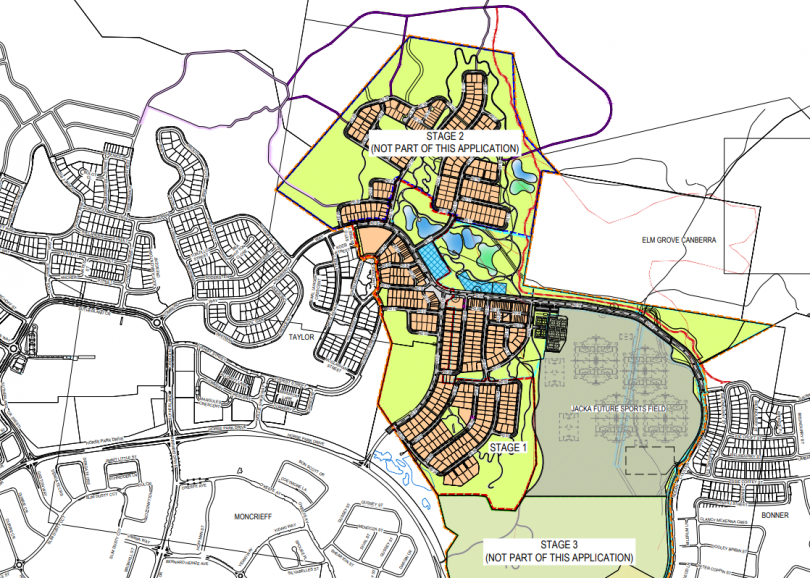 The masterplan shows the extent of Jacka 2 and its proximity to the Elm Grove heritage precinct.

Capital Ecology’s report supports Mr Carmody’s claims that the DA understates the environmental values of land that he is now farming but is slated for development.

Its findings on the box gum woodland and endangered Golden Sun Moth habitat clash with the Gungahlin Strategic Assessment and ACTmapi cited in the DA.

The report says that except for the southernmost patch of vegetation, the distribution of box-gum woodland reported is largely opposite to that presented in the Gungahlin Strategic Assessment and ACTmapi.

It found 31 ha that met the Commonwealth listing criteria, nearly twice that identified in the Gungahlin Strategic Assessment and ACTmapi, and 35.8 ha that met the Territory criteria, about the same area but with a very different distribution.

The study found a large number of mature remnant trees, 12 of which are identified on the ACT Tree Register and habitat for a variety of threatened woodland birds, concluding that the area is an important wildlife movement corridor across the northern border of the ACT.

Elm Grove is the last working property in the Gungahlin area. Mr Carmody has been there since 1985 and was instrumental in it being heritage listed in 2008.

Any heritage conflicts would be a sure indicator for me personally not to invest in Jacka. Also, according to the Canberra Times article titled “Canberra population sprints past 420,000, new figures show” from March 27, 2019, the population of Jacka declined 4.4% in 2017-18, which is quite unseemly for a newer Canberra suburb.

People need somewhere to live. We are running out of room.

David Hennessy - 9 minutes ago
You should get the right to vote with your TFN. If the pollies can take your money they can be accountable to you. View
Daniel Duncan - 2 hours ago
Shane no that was sarcasm and its because of people like you we should raise the age to 21. View
Anthony Briscoe - 4 hours ago
Never View
News 33

Matthew Pez - 32 minutes ago
Simon Adamson how is mowing your lawn at 8pm when there is still light a malicious crime? View
Robert Kearon - 4 hours ago
I would rather 8pm than 8am... not everyone is old and Karen View
Nathan Beck - 5 hours ago
David Cole it would be growing faster than they can cut it in this weather 🤣 View
News 73

Mamy Watts - 1 hour ago
Same outcome, they do nothing anyway. Look out insurance will go up with people making fake claims. View
Capital Retro - 8 hours ago
Some how I don't think insurers will cop this without conditioning the terms and conditions of their cover for home burglarie... View
Jenny Graves - 9 hours ago
Adam Rolls I presume you use your commonsense but don't actually harm them. View
News 15

William Vass - 4 hours ago
Don’t show up for a break-in but worry about scooters. What’s wrong with policing in the ACT??? View
kenbehrens - 7 hours ago
Has anyone ever been fined for smoking at a bus stop? Has anyone been fined for not wearing a mask on public transport? There... View
Nathan Lofthouse - 8 hours ago
Complete with Benny Hill music View
Opinion 80

Craig McPherson - 4 hours ago
I acknowledge the message, but to describe people who are partnered up as being 'privileged' I don't agree with. A privilege... View
Nada Krstin - 4 hours ago
Natalia Komarova yes, I have seen that, very sad indeed - it was either the couples felt 'superior' or the women in their soc... View
Natalia Komarova - 6 hours ago
When my friend lost her husband she said to some extend she lost her social circle as well. While she would catch up with her... View
Food & Wine 9

BlowMeDown - 9 hours ago
I recall my father and I taking the boat out on the western shore in the mid 1960s, where the water has yet to return. It was... View
Capital Retro - 9 hours ago
I think groundwater that enters the artesian aquifers originatesin mountainous country through rock strata. The water in Lake... View
Patrick Keogh - 9 hours ago
What percentage goes into replenishing groundwater compared to what is list to evaporation? View
show more show less
*Results are based on activity within last 7 days