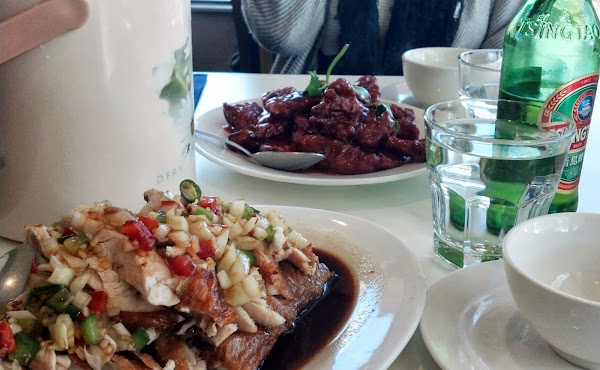 Jimmy’s Place has been around in Dickson for many years now, but recently they’ve moved to the far end of Woolley Street, where the Elders real estate agency briefly dwelt.

I have memories of going there in the mid 2000’s, ordering too heavily off their specials menu, and being overwhelmed by bone marrow and jellyfish and other Chinese delicacies best introduced in small doses.

Since then I’ve looked at the menu in the window many times and written the non-specials off as being bog standard suburban Chinese.

And yet the place has been getting more and more packed to the point they’ve moved up the street to a bigger restaurant.

After trying the new premises for lunch yesterday I think I’ve cracked it.

But the way they do them is anything but bog standard.

The service is OK, the serves are large, and the Tsing Tao beer was $6 a bottle.

Lunch for two with drinks came out around the $50 mark.

Having cracked the code I think I’ll have to go back and see how they’ve re-interpreted the other old stagers.

I recall a tofu and beef dish….

Thanks! (Insert emoticon of despair.)

I recall a tofu and beef dish….

What is it with Chinese restaurant and their names??

Those look like huge serves. Will you be implementing a review of local gyms or aerobic classes post lunch?

What is it with Chinese restaurant and their names??

Most young chinese when learning english are assigned an english name as part of their tuition.

Colin Vivian - 36 minutes ago
Article rather gives the game away “filled-in area will need to settle for a few years before any further development can t... View
Colin Vivian - 46 minutes ago
Annette Milnes you won’t need to worry. The pandemic will provide the perfect opportunity for the Government to ‘discover... View
David Brown - 1 day ago
Baaa wants to sell off our foreshores to his developer mates. 😟 View
Opinion 4

Paul Murray - 2 hours ago
For thousands of years, there has been a penultimate solution (short of execution) for people who just will not, will not, wi... View
News 5

JS9 - 3 hours ago
As long as properly designed, this has the sniff of another 'dickson parklands' to me - i.e. a few whinging locals that simpl... View
JS9 - 3 hours ago
It is simple why it is proposed. Because the huge block where the current layover is down near ANU is on the block to be sold... View
ssek - 4 hours ago
For once, I agree with one of these residents groups. It is hard enough to find parking in the city as it is, without removin... View
Opinion 12

quetzacchi - 3 hours ago
It's all good to say "if we all stay sensible" but if everyone stayed sensible, we wouldn't have had the Victoria outbreak. I... View
Breaking 1

theroundone - 4 hours ago
What are the names of the suspects? View
News 3

Jack Wiles - 20 hours ago
It's not the type of meeting place depicted by so many comments; it's not somewhere you would take young family but is a plac... View
News 20

Marea Fatseas - 23 hours ago
Essentially, 80 percent will still go to landfill under this proposal, which is not a great outcome. View
Capital Retro - 1 day ago
Are you suggesting that while there would be difficulty getting permission in locating and establishing another landfill in C... View
Opinion 2

MERC600 - 24 hours ago
Tim I fear your saying 'The most obvious is the economic downturn created by COVID-19' will prevail. Also this Covid bug econ... View
News 64

Chief Minister Andrew Barr has poured cold water on the possibility of a new football stadium being constructed in the...
News 27

@The_RiotACT @The_RiotACT
Have you seen the latest additions to Batemans Bay’s Sculpture Walk that have provoked a social media storm? https://t.co/gBfhLBC6yi (1 hour ago)

@The_RiotACT @The_RiotACT
After four years and hundreds of columns, Rebecca Vassarotti is signing off to contest the 2020 ACT election https://t.co/7gQ7xJheeJ (2 hours ago)

@The_RiotACT @The_RiotACT
The proposal for a new city bus layover in Turner has sparked a Legislative Assembly petition from local residents who are not on board with the idea https://t.co/O1EAe7wcFk (3 hours ago)