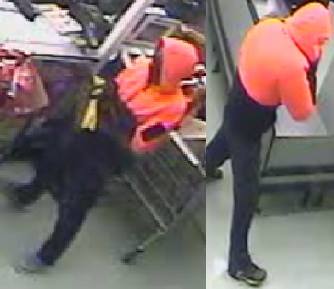 The staff members complied and the two men fled the store running to a small white car being driven by a third man.

Around 9:30pm, officers responded to a report of a car on fire in Farrer. This car has been identified as the one used during the aggravated robbery.

At the time of the incident, both offenders were wearing orange and black high visibility ‘hoodie’ jumpers, dark coloured pants and dark coloured face coverings.

Police are urging anyone who may have witnessed the incident or has information that could assist police to contact Crime Stoppers on 1800 333 000, or via act.crimestoppers.com.au. Information can be provided anonymously.

and today in the supreme court Stephen McCracken earned more time in the big house to join his mates Roland and Herceg.

Only pled guilty as the other two crims were subpoenaed to testify as crown witnesses….

Jo Hann - 29 minutes ago
It's clear that you do not understand what she's done. There is no question that she overruled the recommendations of Sports... View
Tammy Britt Welsh - 3 hours ago
Quick find a virus, let it in the country, and get the media off the fires, and the sports rort View
Daniel Duncan - 7 hours ago
Both sides do the same thing. The only way we can get rid of them is to vote them out. View
News 125

Nick James - 2 hours ago
Just two weeks ago everyone was all for taking meaningful steps to reduce fuel loads... Soon we'll be chaining ourselves to t... View
Paul South - 3 hours ago
Im only aware of salvage logging in soft wood plantations . Where is it happening in our hard wood forests .? View
Paul South - 4 hours ago
Some thing to do with active fire management , if you live in the bush and off the bush . And all you have is two legs to esc... View
News 14

Steve Smith - 2 hours ago
Gerry Gageldonk sounds a bit like “what is needed is what I want” View
Gerry Gageldonk - 3 hours ago
Diana Zdenka give it a chance they don't grow overnight View
Tamara Lions - 3 hours ago
When it was being built, I legit hought it was a battery hen farm. And agree that finished it looks like a detention centre.... View
Sport 6