Lego dates for the next week!

It’s watermelon week in the Lego Challenge before the Liberals and the Pirates get back in the game.

Meegan Fitzharris (Labor for Molonglo) has had to postponed tonight’s planned bout at Gungahlin’s Siren and it will be next week.

Gungahlin Al (Alan Kerlin, Green for Molonglo) is all booked in for tomorrow (Tuesday) at Duxton (Al missed out on the donor phase so has to come to us).

The colourful Johnathan Davis (Green for Brindabella) is taking us down to Tuggeranong for a night at Ojo.

And then on Sunday we’ve got a fired up Karl Maftoum (Labor for Brindabella) at the Burns Club in Kambah from 2-5pm. Karl’s been putting in the preparation for this one and we’re looking forward to seeing if he can build as good a game as he talks. He’s even made a lego version of himself for the facebook event. 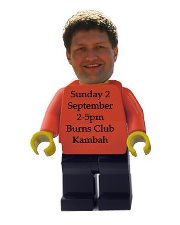 Followed of course by Meegan’s second go round at Siren on Monday.

Candidates who haven’t yet locked in a date for their crack at the Lego should email john@the-riotact.com ASAP. (And if you didn’t donate you’re coming to us at Duxton, to be clear).

If you’re a little confused by this process check out the tag and have a look at previous efforts.

Here’s our nifty calendar which automagically updates because google calendars are up there with the wheel as a useful invention.

3 Responses to Lego dates for the next week!
Filter
Showing only Website comments

Looking forward to seeing what Gungahlin Al can do tonight and seeing who comes along!

Should be a great afternoon – come along after 3pm when things will really begin to heat up! Don’t forget to bring your Dad 🙂

“Watermelon week.” How seedy. Keep rinding them out, JB.

Michelle Paul - 26 minutes ago
They probably have to keep wearing their ring until the show is over.To throw us all off. View
News 73

Julie Macklin - 38 minutes ago
Samuel Gordon-Stewart I'll try that next time. Thanks. View
Capital Retro - 4 hours ago
I can see the logic in what you say and thanks but this assumes that the person checking the others in knows who the others a... View
Samuel Gordon-Stewart - 4 hours ago
Julie Macklin With the NSW app, if you don’t have it installed, you can scan the code with your camera and be directed to a... View
Motoring 6

David Tickner - 2 hours ago
Alan Davey, sad but so true mate. So many whingers out there these days, with nothing better to do with their life unfortunat... View
Opinion 9

jorie1 - 3 hours ago
I support s.122 of the Constitution. You cannot just decide to change the Constitution because you feel like it. The people o... View
Andrew Turnbull - 5 hours ago
Paul Irving ok, now putting your own bigotry towards people of faith how about the actual issue itself. aside View
Rob Taglienti - 6 hours ago
Well said... View
Opinion 5

steve2020 - 4 hours ago
It's cross-cultural and inter-cultural collaboration. No different to many football teams or workplaces, for example. View
Kieran Livingstone - 5 hours ago
“What right do I have to answer such a question when I am steeped in white male privilege?” View
Maya123 - 5 hours ago
“Isn’t this a bit of a oxymoron… ur stating issues of Aboriginal culture while u have a all white band… seems ur just... View
Community 1

Ol L - 5 hours ago
Scary figures for these retrospective energy improvements. All homes September 2019- ‘The cost of the retrofits ranged betw... View
jorie1 - 6 hours ago
Well said @Acton. The price of the property dictates what you get. If you want to rent a 6 star energy efficient modern updat... View
jorie1 - 6 hours ago
I agree that a world view of housing should be to provide shelter first, and most houses in Australia do provide shelter. But... View
Opinion 12

JC - 6 hours ago
You could probably go back to Tuggeranong actually. And the reason is the design and the underlying principle that underpinne... View
News 2

Capital Retro - 7 hours ago
The workers should be in quarantine also. And why they are in a hotel is a mystery - they should be in a tent camp in the bus... View
News 22

Karen Feng - 7 hours ago
yes. current method seems to allow people to suffer till they die. My dad had cancer and he wanted to be euthanized. I was go... View
Opinion 27

Capital Retro - 7 hours ago
As well as being an apologist for the un-needed light rail, JC has also become a consultant for "Fix My Street" which is spon... View
Capital Retro - 7 hours ago
Well, it was pointless to replace one existing and successful mode of transport with another. The same "urban renewal" missio... View
show more show less
*Results are based on activity within last 7 days

Pet owners who had paid to bury their beloved animals at a pet cemetery at a property that has since...
News 28

When we first arrived in Canberra in 1995, my boys google-eyed at the grand entry down Northbourne Avenue - the...
News 72

@The_RiotACT @The_RiotACT
Dreaming of cocktails on the coast? A refreshed @CorrigansCove Resort in Batemans Bay could be the perfect spot for your next getaway https://t.co/2JGOZd9wkS (1 hour ago)